In today's tough economic clime, cost-cutting seems to be the mantra for India Japan Lighting (IJL). 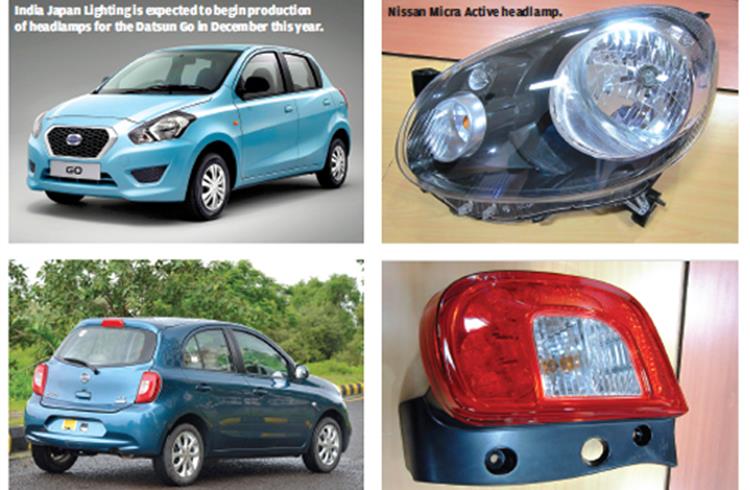 In today's tough economic clime, cost-cutting seems to be the mantra for India Japan Lighting (IJL). Be it a new direct aluminising method or procurement of machinery that reduces critical shopfloor space, IJL is doing its best to keep customers happy and that effort seems to be showing. The 50:50 joint venture between Lucas TVS and Koito Japan has been named as the single-source lighting equipment supplier for Nissan Motor India’s Micra and Micra Active hatchbacks.

While the Micra’s sales performance in India might not exactly set the cash register ringing at IJL, the company has also bagged the order for supply of headlamps for the Micra manufactured in Thailand and Mexico. IJL has built a dedicated (at least for now) unit within its Chennai factory to cater to Nissan’s orders. The company will be supplying headlamps for Nissan’s Thailand and Mexico operations. For the Indian variants of the Micra, IJL will supply rear combination lamps (RCL).

What's more, the Chennai-based supplier will also provide headlamps for the Datsun Go, which is expected to hit the market in early 2014. IJL is expected to begin production for this by December this year.

All these orders make IJL confident that, despite the market slowdown, it will notch close to 30 percent growth to reach a turnover of around Rs 315-320 crore in 2013-14. Current orders that are keeping IJL accountants busy include those of Nissan and for the high-selling Honda Amaze, which is supplied from IJL’s Bawal plant. Apart from the Datsun order, which promises a lot as the car is a volume player, future orders include that of headlamps for the Ashok Leyland Boss and RCL and backup lamps for an upcoming refresh of the Honda City, which is to be launched in December. IJL’s current client roster also includes Daimler India Commercial Vehicles and its Fuso brand of trucks made at Oragadam and exported worldwide. In two-wheelers, it currently supplies to 70 percent of Honda’s Activa scooter made at the Narsapura, Karnataka plant. It will also soon begin supply of headlamps to the Yamaha Ray scooter.

Orders apart, IJL is concentrating on carving a niche for itself in the market by driving its 40-member R&D team to develop new lighting solutions like the High-Intensity LED (HILED), with special focus on reduction of weight and power consumption.

One of the major factors helping IJL cut costs is a flurry of changes in the manufacturing processes. “We’ve began direct aluminising of headlamps. Here, we skip the base coat altogether. We concentrate on the moulds because it needs to withstand this process. So periodical maintenance of the mould is required,” says R Amarnath, senior vice- president, Group financial services, for Lucas-TVS. The cost of the base coat, reduction in power consumption thanks to not having to use the oven, and reduction of cycle time are just some of the advantages by this process.

“We’re also using new machines to combine processes,” Amarnath continues. “Earlier, the processing of the components in a lamp used to take place in two separate parts of the plant. The hot coater was kept separately from the aluminising plant. But now, in our Unit 2 in Chennai, through what is called Infra Red and Ultra Violet technology, we can conduct both processes at the same time. The aluminising plant in that unit handles both hot coating and aluminising,” he explains.

“The idea is to extend this to the older Unit I in Chennai and to the Bawal plant,” says Sivaram. “Another strategy we are using is investing in instalments,” adds Amarnath. “Unless you have confirmed orders in large volumes, the conventional model is not workable anymore,” he says. As far as convincing customers is concerned, IJL has not found it difficult as the directly-aluminised lamps have already found their way into the recently launched Toyota EtiosLiva facelift.

Apart from this, IJL will also soon invest in a machine that will help the company produce rear lights that are of a single piece with a technology called multi-colour moulding. “In the rear combination lamps, the colours for reverse and indicators are actually different parts that are moulded together to increase the visual appeal,” says Amarnath.

This is precisely what the multi-colour moulding will take care of. “Through this technology, we will be able to do this in the same machine so it will become a single part,” comments Amarnath. Sivaram adds, “We are investing in this. For the total setup, it will depend on where we get the machine from. The machine will have to be commissioned in the middle of the next calendar year by July or August and serial production will kick off after trials are done."

Tech of the town

IJL also has a team of engineers located in Koito, Japan to gain exposure to the very latest in lighting technologies. These engineers, who go in groups of 3-4, go about replicating what they see there in IJL’s facilities in Chennai or Bawal. The success of this model can be attributed to an upcoming model that is to be released early next year, says Amarnath while declining to divulge who the OEM is.

“At the end of the day for us, it is about considered judgement,” concludes Amarnath, espousing, in a sense, a mantra for the entire automotive vendor fraternity in India.