This design would then be passed on (as raw data) to a dynamicist, who will use the model of the vehicle to analyse the effect of the new suspension on the vehicle dynamics (usually without the suspension designer being involved). 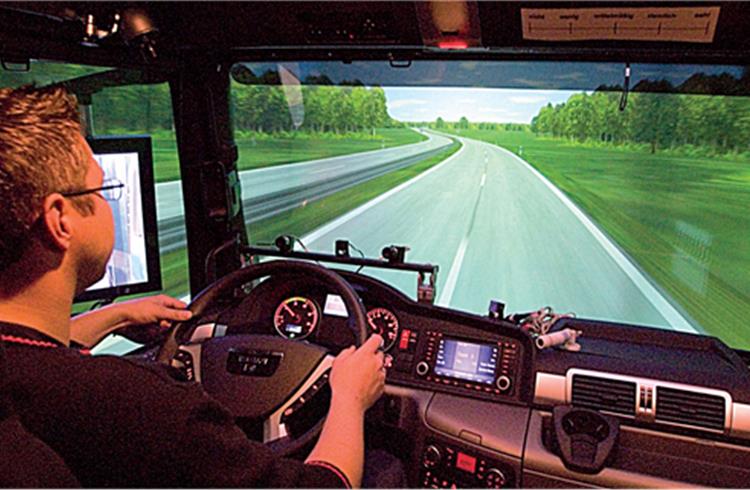 Designing an automobile involves the interaction of expertise from a number of engineering domains. Aerodynamics and body engineers work with the hull of the vehicle, vehicle dynamicists decide on the performance limits of the vehicle in motion, powertrain engineers design, tune, and calibrate the engine for efficiency and performance, and so on.

In this age of computer-aided design, the design team uses a distinctive software toolchain for each of these specialised areas. Most of these tools are self-contained for the intended design application, and do not provide interactivity with any other toolchain. This creates issues for the designers when a situation arises that requires, for example, the vehicle dynamics engineer to work with the powertrain engineer to control vibrations generated by the engine on the vehicle frame.

To counter this problem, the concept of “co-simulation” has been promoted in some of the toolchains. Co-simulation essentially is one toolchain’s way of providing a hook into another toolchain such that each software does its own work, but allows for information to be passed between the toolchains for manipulation. This leads to the co-simulation ideology of “using the right tool for the right purpose with information interchange”.

So, how does this differ from traditional Computer-Aided-Engineering (CAE)? Let us consider a design activity carried out by an automotive R&D team to analyse the effect of a change in suspension design on the ride quality of the vehicle. The traditional approach (based on CAE) would be to employ relevant tools to model the suspension system and stress it so that its full range of operation is uncovered.

The crucial issue here is that these designers work with different software tools, so one has no way of knowing the results of a test on a module undertaken using the tool the other is using. In the co-simulation paradigm, because of the information interchange between the two toolchains, the dynamicist would be able to “import” the actual software design of the suspension as is into his preferred toolchain and analyse the vehicle dynamics with the actual suspension design in simulation (as opposed to using static suspension data).

Likewise, an imported vehicle dynamics model will be made available to the suspension designer so that suspension parameters can be changed by simulating the system as a whole, rather than in parts or in isolation from each other!

Continuing the suspension design example, the two designers may then need to let the vehicle run over a desired terrain. This is often achieved by one of the software toolchains having the capability to generate virtual terrain models on which the vehicle can travel. This will allow both the suspension designer and the dynamicist to essentially evaluate their respective systems in relation to each other and to the environment.

• Hardware elements easily integrated into the simulation for real-time interaction.

• Virtual testing of designs from system specification to software implementation.

• Adherence to the V-cycle design for Model Based Development.

Co-simulation not only allows designers of different engineering domains to interact; it also facilitates the creation of hybrid design validation, testing, and training “workbenches”. These workbenches are usually a combination of software and hardware elements, the software element being the modelling tool using advanced mathematics and physics concepts, and the hardware (electronic and mechanical) emulating the sensors, actuators, and mechanical linkages in the system. Together, a complete vehicle is constructed, which allows the designers and end-users to “drive” the vehicle under design even without a physical prototype.

Co-simulation systems can also be modified to incorporate Hardware-In-the-Loop (HIL) design verification and interactive “simulators” (with a motion seat or motion platform) by the addition of driver controls like pedals, steering, gearshifting, and brake hardware (these could be the actual hardware found on a typical vehicle).

Acti-V (Automotive Co-simulation Tools Integration – Viswire) is one such integrated system based on the Model Based Design approach, and acts as a co-simulation enabler for multidisciplinary domains such as aerospace, automotive, medical systems.

The Acti-V co-simulation solution offered by Viswire allows seamless integration of the various components of a co-simulation system, for both product design and development, validation, testing, and training. The architecture of Acti-V is laid out in the following way:

• Using the Model Based Development approach, Acti-V seamlessly integrates CAE and numerical simulation models. These can be either client-supplied, or developed by Viswire in conjunction with domain experts (either from the client or via Viswire’s strategic partnerships).

• Acti-V allows information from the simulation output to be fed back to the design environment.

Engineers from different domains can use Acti-V as a one-stop source for all their design requirements, without having to rely on explicit raw data interchange between various toolchains. Acti-V’s architecture allows the seamless integration of tools for achieving tasks like electronic throttle control and software-sensor implementation for a passenger car, and vehicle suspension tuning for a truck, as in the following examples highlighting the framework’s effectiveness in addressing design and test issues.

1. ECU implementation of electronic throttle control (ETC) for a passenger car Fuel economy in a car is often linked to the effective and precise control of the throttle plate position for intake air. The airflow is very often electronically controlled, by means of a motorised throttle plate. Precise control of the throttle motor then controls the intake air over the entire range of plate positions (including idle).

To design this system, a numerical tool like MATLAB/Simulink is often employed to arrive at an appropriate control algorithm for throttle plate control. The controlled throttle then has to be connected to a dynamic model of the entire vehicle (including chassis, wheels, suspensions, etc), usually modelled in a CAE tool like MSC-Adams, along with an engine model, to validate the throttle control design from a system perspective.

To get closer to the realism of actually designing/testing the vehicle, vehicle control hardware elements like steering wheel, pedals, and gearshifter can be interfaced to the combined throttle-body-and-vehicle model.

2. ECU implementation of advanced sensor-replacement software algorithms Another example to consider would be the implementation of a cabin air monitoring and control system in a climate-control ECU for a car. Maintaining in-cabin air quality becomes essential from the point of view of complying with environmental regulations as well as for passenger comfort. To avoid the cost of using physical sensors to measure air quality, the system can have a software sensor.

The software sensor algorithm has to be designed and tested with the vehicle in motion to optimise the sensor algorithm with respect to the air flow in the cabin. Typically, the airflow will be modelled using CFD (Computational Fluid Dynamics) tools and the data collected will be passed on to the sensor algorithm designer using a numerical modelling tool that can reproduce a software gas sensor. Again, design and testing of one module is done without the knowledge or interaction of the other.

Using the Acti-V framework, the software sensor designer will also be able to import the in-cabin airflow model into the numerical simulation environment to understand air flow dynamics for sensor design. Implementation hardware, i.e. a prototype ECU with the sensor software embedded in it, can be interfaced with the airflow model to create a testbench.

Ride quality of a commercial vehicle like a truck depends on the effective tuning of the suspension parameters (spring stiffness, damper parameters, etc). An effective way of achieving this is to construct a base CAE model of the suspension in a tool like MSC-Adams. Utilising co-simulation, the combined truck dynamics with the suspension model can now be simulated along with an engine model developed in a numerical simulation tool like MATLAB/Simulink and what-if scenarios can be built to test the suspension design from a system perspective.

Along with external hardware driver controls like steering, pedals, and gears, the designers can run the vehicle through various manoeuvres while tuning the suspension parameters and testing for ride quality improvement using the Acti-V framework.

Viswire Simulation & Training is a Chennai-based system integration company that focuses on real-time simulation for engineering, training, and research. Viswire is promoted by a group of professionals with a flight simulation background.

Its simulation offerings cover the aerospace, automotive, naval, and medical domains. Viswire is also a specialist in creating visual worlds optimised for simulation.