Yamaha’s field evaluation teams visit the dealers and gauge how the mechanics perform after their training and suggest the next course of action, which can be either a refresher course or the next level of training. 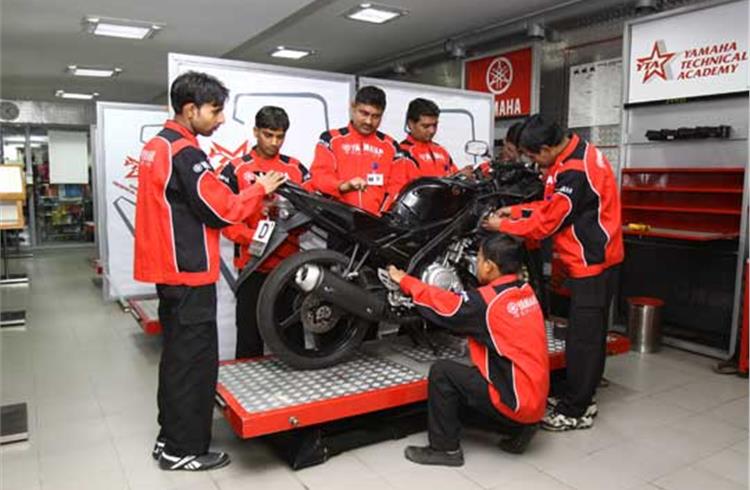 Be it a local tea stall owner or a vehicle manufacturer, everybody likes a happy customer. This is where a manufacturer’s aftersales network plays a big role in keeping customers happy. Comprising authorised workshops, these are manned by dealer-sourced manpower and while these helpers, mechanics and supervisors may not be directly on the manufacturer payrolls, they are as much a face of the company as any Bollywood brand ambassador.

Being in direct contact with the customers, they can make or break a manufacturer’s reputation which can have an impact on sales and consequently, the bottom line. Yamaha, one of India’s two-wheeler majors, conducts one key activity to do its bit for the customer. That is the National Technical Grand Prix competition for its dealers’ workshop mechanics, which recently concluded its third round.

The National Technical Grand Prix is where the mechanics test their technical as well as inter-personal skills such as learning how to greet and interact with customers. Conducted over a period of three months, 850 mechanics took part in the competition and five winners each from five zones took part in the final round at the company’s Surajpur, Uttar Pradesh plant. The winner gets a chance to compete with the winner of next year’s competition to decide who gets to compete with winners from other countries at the World Tech Grand Prix in 2014.

So what does Yamaha hope to achieve with this? This competition is as much a part of the training programme as it is a Human Resource initiative. Ravinder Singh, Group Head – Service, India Yamaha Motor, explains. “We have devised the Yamaha Technical Academy training programme specifically to cater to local needs and have linked it to the career growth of the service technicians. There are three levels – Beginner, Bronze and Silver. We club their training level to the remuneration they are eligible for. There are other motivational activities that we have recommended for dealers like Mechanic of the Month award, Clean Person of the Month award, and starting insurance and provident fund which makes them feel like a part of a family. There are also incentives on the number of services performed and the quality of service.”

While these are the initiatives what dealers undertake, Singh says the company itself carries out some motivational activities. “We display a training calendar at the dealership that shows the name and current training level of the technician as well as the training level he is expected to achieve next. So he can see his career path and get motivated to do better. They also realise that people are looking after him and he is an important part of the dealership.” “Our expectations from them are that they are doctors of the machine and we treat them like one. So we expect that if they are touching the bike, it should be like a doctor, and when they greet the customer they should be very professional about it,” adds Singh.

It began with a survey

The National Technical Grand Prix has its origins in the findings of a survey conducted in 2009. Singh tells us, “We conducted a survey in 2009 and found that there was an attrition rate of 25 percent among the trained manpower and that is pretty high. This is not only a loss to the company but also to the dealer. We brainstormed and devised a programme for motivation at the dealer end. This formed the base for the National Technical GP in 2010. Also, we wanted to make the dealer understand the value of one trained technician. If one Silver level-qualified technician leaves, it is a loss of Rs 70,000 to the dealer, and that kind of money has to be spent again to train the new recruit from scratch. So we motivate the dealers to retain the trained staff.”

And all this effort seems to have borne fruit with the attrition rate coming down to 15 percent in 2011 and further to 12 percent this year.The process is constant and works in a feedback-response method.

Yamaha’s field evaluation teams visit the dealers and gauge how the mechanics perform after their training and suggest the next course of action, which can be either a refresher course or the next level of training.

Umesh Kumar, one of the finalists at the competition and an old hand of 28 years, says: “I have seen dealerships come and go and a lot of changes have taken place over the years. The machines today are more complex and regular training is, therefore, a necessity. Today even dealerships have to hire people who can read and write since there are detailed service manuals and you can’t do anything if you can’t read.” Santosh Kumar, another finalist has been working at a workshop in Jagadhari, Haryana for 16 years. He says, “At your workshop, you are the best, but once you come here to compete you realise you’re no great shakes.” Speaking on how his career has progressed at Yamaha, he has no complaints, “You get to learn so much and when you see your name on a board in big letters, it makes you feel proud.”

Sagar Gaikwad from Pune moved from a Bajaj Auto dealership to India Yamaha Motor two years ago and says, “There is a stark difference in the kind of training that is given here.” Thirty-four-year-old Pinkesh Chauhan from Vadodara, Gujarat, who has spent 12 years looking after Yamaha motorcycles, says: “It’s a good thing that each mechanic at the workshop has a goal set for him to achieve in terms of his qualifications. But it’s the constant endeavour to learn that keeps me going. Obviously, if you are getting good growth at the same place, why would you want to leave? But things can always be better, no matter how good the situation.”Most finalists we spoke to echoed a similar sentiment.

So Yamaha’s initiative is seemingly having the effect it was intended for, and the important role the dealership plays can’t be discounted. But since the grass is always greener on the other side, you can’t change the fact that people will move for better prospects.