A year ago, KHMD developed a duo of interesting products: a window regulator anti-pinch (WRAP) device and an automatic headlamp leveller. 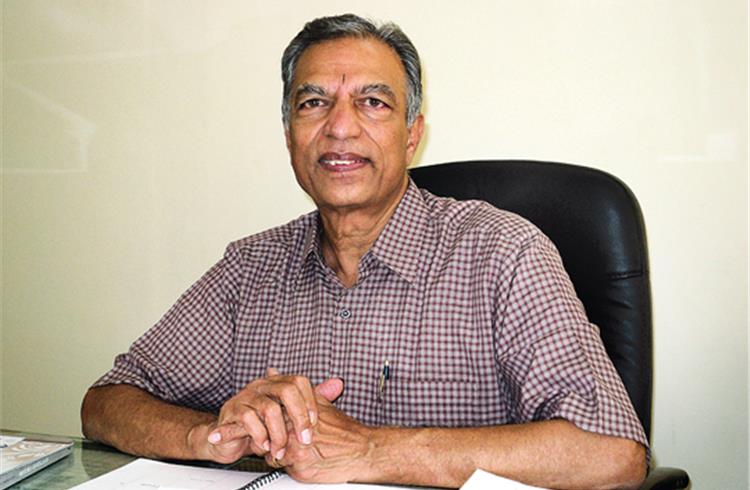 Bangalore-based Karnataka Hybrid Micro Devices (KHMD) is working on three electronic products in the current fiscal year. These include a multi-function regulator, an emissions chip and a thick film resistor.

Speaking to Autocar Professional, CEO and MD, E S Dwarakadasa says that KHMD plans to leverage its experience in making regulators to manufacture a multi-functional regulator and wishes to do it on its own. “We hope to have it ready in a year’s time,” he adds.

What is unique about this product, he says, is that he wants to make a hybrid-kind of product, not a PCB type. A multi-function regulator will give output from the alternator to the different systems in a car and lower the strain on the battery. In brief, “it is like a battery management system coming from an alternator,” says the CEO. It is an expertise the company is well known for. The word ‘hybrid’ here connotes a generation of networks into which one integrates resistors, injectors and capacitors.

Being a highly R&D- driven company, it is easy to see where Dwarakadasa is coming from. He is also aware that for the kind of products he wishes to design and productionise, the need of the hour is talent. “This is not a problem that can be solved in a hurry,” he says matter-of-factly. “We need an electronics engineer with an interest in hardware," he adds. And given its focus on R&D, the CEO has now shifted his R&D department from the factory, which is on the outskirts of Bangalore, to the city.

A year ago, KHMD developed a duo of interesting products: a window regulator anti-pinch (WRAP) device and an automatic headlamp leveller. The company has shown these products to some OEMs but says that concerns were expressed about the additional costs that would be involved.

It’s something that Dwarakadasa is probably quite used to. “In a cost-conscious industry, one has to accept some things,” he says. What would help is if government regulations made such products necessary but none of that is now even on the horizon. This has made KHMD look at prospects of selling this product overseas and it has begun talking to parties in the US and Europe. The second product which has much promise is the emissions chip. As Dwarakadasa puts it, “We want to put a chip into the exhaust. So such a chip would help us know and quantify the kind of pollutants emitted. Such a product requires a combination of several disciplines.”

He continues, “We only have to look around Bangalore with its five million vehicles and know what a difference this chip can make.” He is, however, very clear that “we must have something concrete to offer.”

The third product is a thick film resistor (TFR) which, as Dwarakadasa explains, is a segmented resistor that carries a small current and has a movable arm so it can be put in a fuel tank. It works on the float principle and can be used to measure the amount of fuel in a vehicle without having to switch on the ignition. Such products exist in the Maruti Zen as also in high-end cars such as Mercedes and Audis. So while it is not new, Dwarakadasa wants to make such a product indigenously.

For KHMD’s new product concepts to be used more widely, a strategic tie-up with an OEM is the way forward. Added to that is the need for technical marketing, and more appreciation of quality comes at a price.

KHMD is the only Indian firm that has capabilities for the design, development and manufacture of custom-built TFR for not only automotive but aerospace and other applications.

The company is now in talks with bigger players in the auto electronics space for a breakthrough deal. Talks have also been initiated with Hueco and Valeo. KHMD’s offtake of regulators – its core business – saw a huge increase in the September 2011 to January 2012 phase and then a more constant number in the months thereafter. While a dip was witnessed in April 2012, Dwarakadasa is confident that business can only get better. As an example, the SR 60 chip production is now 4,000 a day, he says. KHMD's largest portfolio comprises regulators and its clientele includes Lucas-TVS, Macurex, Multi-Link and Koastal NTTF.

The challenges in auto electronics are many. If one key issue is manpower, another is the availability of electronic materials. At the moment, the focus is in the luxury segment as far as as auto goes but going forward, many of such applications will be more mainstream, more necessary, remarks Dwarakadasa.

It is with that aim to be future-ready that KHMD has allocated Rs 1 crore for research purposes, of which 60-70 percent will be devoted to auto electronics. One of KHMD’s important projects is an ECU and while the market for it is dominated by the likes of Siemens, Bosch and even Honeywell, which is eyeing the sector, Dwarakadasa is clear that KHMD will only look at specific applications or niche areas.