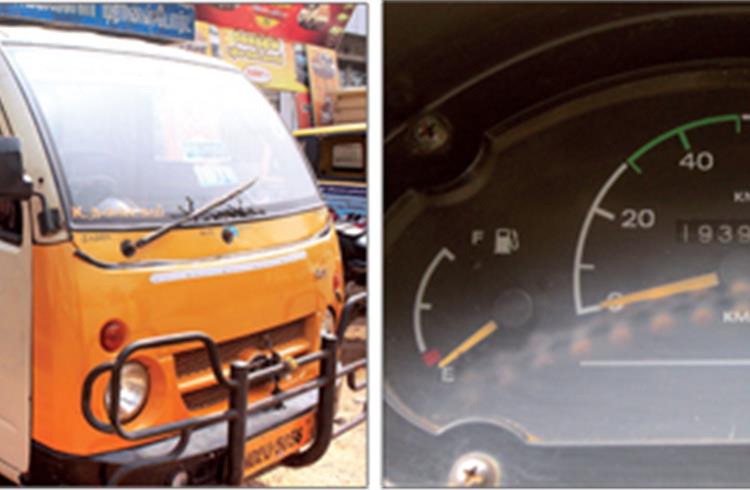 When S Kumar came to Chennai in the year 2000 from his hometown Pudukottai, 375km away, he didn’t have a licence and didn’t know driving. Leaving his small, rural dwelling for the big city wasn’t easy for Kumar but he was keen to enhance his earnings as revenues from farming were not helping him support his ageing parents. Twelve years later, Kumar is now the proud owner of two tracts of land back home and one near Chennai. His story of dogged determination and his business built on the back of the Tata Ace can be a source of inspiration all over India.

After moving tao Chennai, Kumar spent three years carrying small cargo loads in a rented make-shift three-wheeler. Then one day, after being harassed by the cops for parking his vehicle in a no-parking zone, Kumar had had enough. He looked into his savings and realised that he had enough for the down-payment in a vehicle of his own.

He decided that the Tata Ace would be ideal and remembering that a friend owed him some money, he set out looking for him. As Kumar’s luck would have it, his friend couldn’t be traced and so the amount of Rs 20,000 was lost forever. So Kumar decided to take a bank loan and was able to realise his dream of having a motorised vehicle. That was way back in June 2005. From then on, there has been no looking back for this father of two. “I have now earned enough to buy some land back home,” a proud Kumar says.

Kumar recollects an instance when the vehicle’s bearing broke late at night when he was delivering a consignment in Trichy, 350km from Chennai. “I knew enough to handle minor repairs but this time, I didn’t know what to do,” recalls Kumar. Stranded, Kumar called his regular service technician in Chennai and was told: “Drive carefully and first deliver the consignment and call me back in the morning.”

Kumar did that, driving slowly to his destination. After spending the night in his vehicle, he called the technician again and was told that he had to return to Chennai as the part wasn’t available in Trichy. It wasn’t easy driving the crippled vehicle back but Kumar managed. “That’s when I started to recommending the Ace to others,” Kumar said. He reckons that 10 others have bought one solely on his recommendation.

Kumar uses his Ace to carry construction materials, vegetables and wedding items. On an average, he clocks close to 6,000km a month. His longest journey has been 600km all the way to Rameswaram at the southern tip of India. Kumar didn’t know he was the first Ace customer till he was contacted by Tata Motors for a recent felicitation event on the sidelines of the event that marked the sales of one million Ace vehicles.

Kumar says that he’s always been happy with his Ace. Now attention from the company and some media interest has made him more vocal. “If Tata Motors can do something for my kids, may be get them a computer, it will help them with school. I can fend for myself,” he signs off.

LADY AND THE LEYLAND DOST

When the driver she had appointed deserted her in the middle of a busy bus terminus, vegetables and grocery seller, B Rupa had two choices – she could either give into her parents’ pestering that it was a bad decision to attempt to become a retailer far away from home or roll up her sleeves and do what was needed by herself. If Rupa had gone down the former path, she would not have been spoken about during the Ashok Leyland Dost’s first year anniversary event in September this year.

But Rupa, a single mother of one, never learnt how to ride a bicycle, let alone drive a small commercial vehicle. “I observed what the driver did when I sat next to him during our trips to the market and I learnt from that,” Rupa says, confidently. The 34-year-old used to take four-hour-long bus rides to her vendor, buy as much vegetables as she could carry on her head and sell it off in her local market.

When she decided to buy the Dost to improve the volume of her business, company officials were hesitant to sell the small commercial vehicle to her. “I went with my mother to the showroom in Salem, Tamil Nadu and the entire team there was surprised that two women had turned up to buy the Dost,” Rupa adds. She had to prove to Ashok Leyland’s sales team there that she could, in fact, drive the vehicle. When she did, they were only happy to sell it to her.

“Sometimes, I go to the market and return the very same day after selling the goods. As for the groceries, I buy it from a very old shop in Salem in bulk, bring it back home to put them in small packets and sell it at local markets nearby,” Rupa continues. But business is booming and she now has enough to build an extension to her house to better accommodate her larger extended family. In fact, her hard work has seen the business grow so much so that even after she packs in as much as she can, it isn’t enough to transport the volume she handles. “Recently, I spent Rs 4,000 to hire another truck to transport the goods I bought because the Dost was fully loaded,” Rupa comments, a smile betraying her honesty.

“Frankly,” Rupa says, “I am not concerned about the mileage.” She understands that the more goods she loads, mileage will be affected and given the nature of her business, the volumes only keep increasing. “I get around Rs 200 per sack of vegetables that weigh around 90 kilos. If worse comes to worse, I can reduce my margin to accommodate for the loss in mileage,” says Rupa reeling out combinations.

With an expanding business and constant increase in volumes, Rupa now wants to buy a bigger six-tonne truck and she has an Eicher model in mind. The ball is in Ashok Leyland’s court to whip something up to retain its sole lady customer.