Improved buyer sentiments boosted sales but good monsoons will be crucial in maintaining the momentum as the festive season approaches. 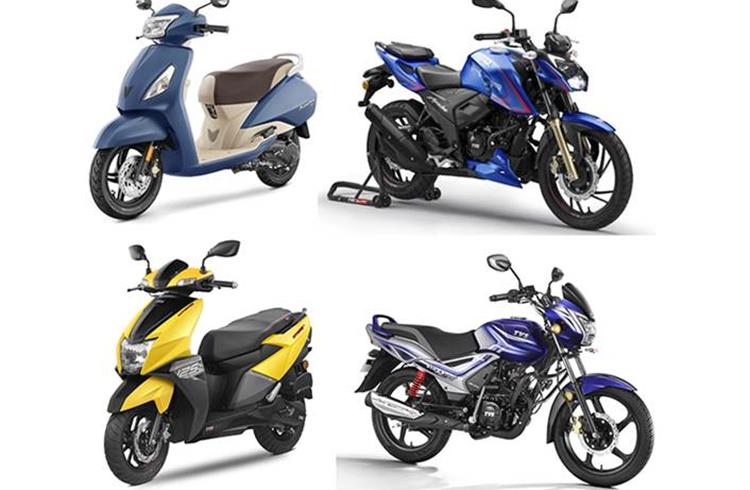 India’s key two-wheeler companies witnessed growth both in the month-on-month and year-on-year sales. This may indicate an improvement in people's buying sentiments or even latent demand.

However, with schools and colleges reopening, and with people returning to office, these numbers may go up. Two-wheeler companies continue to grapple with chips availability for their high end models. In the months ahead, the performance of the monsoons will play a key role in determining demand as good rains increase rural based activities around agriculture, and add to farmer incomes. There is also a concern around rising cases of Covid in major cities but whether this will impact demand remains to be seen.

The company said the growth in volumes indicated the continuously improving consumer sentiments and the company expects the positive trend to continue in the coming months, on the back of a decent monsoon, and encouraging farm activity. Its June sales tally at 4.85 lakh units of motorcycles and scooters, (inclusive of exports) was a growth of 3.3 percent over the corresponding month of FY 2021 when it sold 4.69 lakh units. Hero MotoCorp also introduced the new Passion ‘XTec’ equipped with a slew of features such as the First-in-Segment Projector LED Headlamp, Full-Digital Instrument Cluster with Bluetooth Connectivity, SMS and Call Alerts, Real-Time Mileage Indicator, Low-Fuel Indicator, Side-Stand Engine Cut-Off and Service Reminder.

Bajaj Auto: 125,083 units / -20 percent
Bajaj Auto’s June domestic motorcycle sales have come in at 125,083 units as compared to 155,640 vehicles in June 2021. Exports for June have however increased significantly at 190,865 units compared to 154,938 vehicles exported in June 2021, an increase of 23 percent. A YTD analysis indicates that Bajaj Auto’s domestic motorcycle sales in the first quarter of this year were 314,418 units compared to 342,552 units sold during the same period last fiscal. The sales numbers indicate that demand for the entry level bike segment is yet to recover and the two-wheeler market is also seeing the impact of significantly lower rural demand. Manufacturers have now pinned their hopes on good monsoons that will boost rural activities.

Honda Motorcycle & Scooter India :355,560 units / 67 percent
HMSI sold 355,560 units compared to 212,453 in June 2021. This is a whooping 67 percent growth in the YoY sales. When compared on a MoM basis, the company sales grew 11 percent in June 2022 with its sales tally at 320, 844 units. A total of 383,882 units including 28,322 export units were sold in June. Atsushi Ogata, Managing Director, President & CEO, said, “The growth expectations with which we set out in the beginning of FY '23 is gradually turning into a reality. The timely arrival of monsoons has impacted the economic indicators favourably. We expect the coming months to sustain this upward trend as more customers look for two-wheeler mobility options.”

While motorcycles registered sales of 146,075 units, scooter sales stood at 105,211 units in June 2022. On the export front, the numbers grew by 9 percent from 92,679 units in June 2021 to 100,625 units in June 2022. TVS said that the shortage in the supply of semiconductors has impacted the production and sales of premium two-wheelers.  It continues to work with alternative sources and is making every effort to improve supplies. With some improvement in chip supplies, the company said it was optimistic that volumes will revive to normal levels.

Royal Enfield: 50,265 unit / 40 percent
Royal Enfield sold 50,265 units in the local market, a 40 percent YoY growth on June 2021 sales. Its year-earlier month tally was 35,815 units. The June numbers were down by 6 percent as compared to 53,525 units in May 2022. Inclusive of exports, the company sold 61,407 units which includes exports of 11,142 units. The Chennai-based manufacturer also recently made a key appointment roping in Y S Guleria  earlier with HMSI, as the Chief Commercial Officer. He will be responsible for RE’s business growth in India and abroad.