CY2022’s combined 3.5 million domestic and export sales are the second-best for TVS Motor Co after the 3.75 million units in 2018. 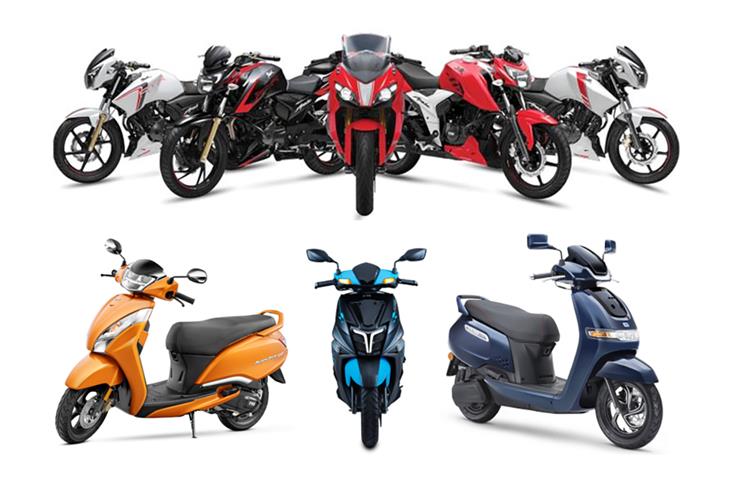 Number-crunching reveals that TVS sold 2.45 million two-wheelers in the domestic market and exported 1.06 million units in 2022 (see data table below). The cumulative domestic and export sales number – 35,25,039 – translates into 9,657 TVS two-wheelers being sold every day last year or 6,732 units in India and 2,925 units in overseas markets. 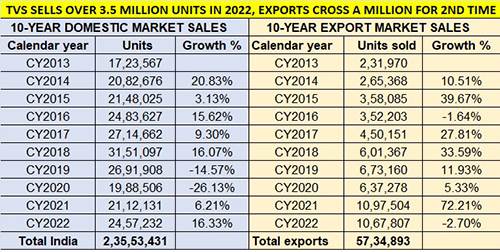 Combined domestic and export market sales have crossed three-and-a-million units for the second time in CY2022. The previous occasion was in 2018.

Betting big on exports
While TVS remains on a strong footing in the domestic market with 24,57,232 units, recording 16% year-on-year growth and the firm No. 3 player after Hero MotoCorp and Honda Motorcycle & Scooter India, it is the company’s improving export growth story which is drawing attention.

TVS exports have seen 360% growth from CY2013’s 231,970 units to CY2022’s 10,67,807 units. In terms of annual growth, the company saw its highest exports in CY2021 when it surpassed the million- units milestone in a calendar year for the first time and recorded strong 72% YoY growth, driven by the pent-up demand and opening of overseas markets after the pandemic. Importantly, despite the troubled global geo-political scenario in 2022, the devaluation of the rupee and the strengthening of the dollar impacting demand in export markets, the company saw only a marginal impact on export sales: 10,67,807 units, down 2.70% (CY2021: 10,97,504).

TVS Motor Company has a presence across 80 countries in Africa, Southeast Asia, Indian Sub-Continent, Central & Latin America and is seeking to enter more markets in Europe and North America.