Even as the formidable duo of the Maruti Brrezza Vitara and the Hyundai Creta reign supreme, the new Maruti Ertiga clocks its best sales since July 2017. 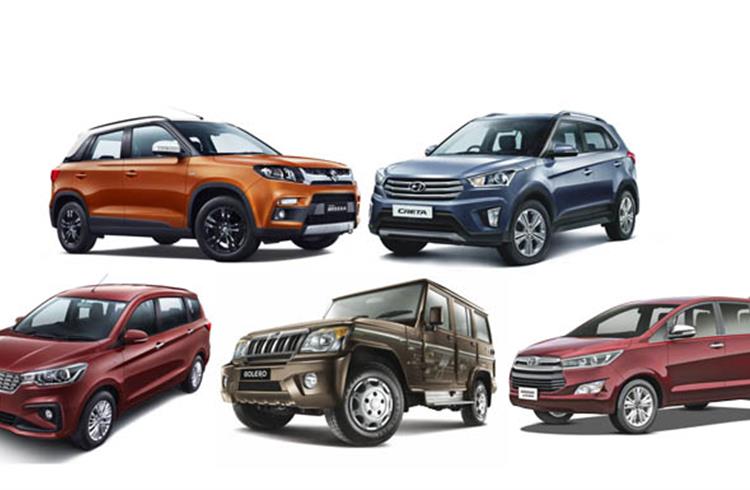 Even though utility vehicles (UVs) have been driving in the fast lane for some time now and providing a strong buffer to moderating passenger vehicle (PV) sales, their popularity of late has seen a decline, with buyers becoming conscious of fuel efficiency and possibly awaiting big price discounts before the end of the year.

Maruti’s Vitara Brezza maintains its dominance and continues to lead the pack of the top five UVs, selling 14,378 units in the month (November 2017: 14,458). The popular crossover has been one of the growth drivers for the company’s UV market share, which today stands at over 28 percent, with cumulative sales of 174,145 units, clocked between April and November 2018. The Brezza, in its updated avatar, now sees the option of a diesel AMT, along with safety kit including dual-front airbags, ABS and EBD becoming standard across the range.

At No. 2, the Hyundai Creta maintains its position in the tally with sales on the uptick and clocking 9,677 units (November 2017: 8,377). Hyundai brought in the facelift version of the Creta on May 21 and updated the crossover with styling tweaks giving it a revised front grille, refreshed headlamps, tail lamps, new diamond-cut alloy wheels and also a sunroof in its top-end trim.

The No. 3 position gets secured by the newly launched Maruti Ertiga, which in its second-generation avatar, has grown in its dimensions to offer better space and comfort on the inside, thus, ironing out most gremlins of the outgoing model. The Ertiga went home to 6,362 buyers in the month and with the option of an all-new 1.5-litre petrol, as well as a diesel engine, it targets both private buyers and fleet operators. The new Ertiga ticks all the right boxes when it comes to fit and finish, ride quality, practicality and overall being a value-for-money package.

Interestingly, the MPV, in its new avatar, has clocked a new high after 16 months. It was in July 2016 that the Ertiga had clocked 7,458 units.

While buyers in Tier 1 cities might be reconsidering sedans over their crossover counterparts, the demand for rugged UVs persists in the rural and semi-urban sectors, given the increasing infrastructural development in the country. Clinching the No. 4 position, the Mahindra Bolero jumps one rank with despatches of 5,582 units in November, up from the 4,911 units it had clocked in November 2017.

Closing the tally at No. 5 is the Toyota Innova Crysta, at 5,425 units (November 2017: 5,643), but dropping down two ranks. The Innova Crysta could easily be considered as the king of the people-mover space, with not only commercial fleet operators, but, even private buyers considering it for family use.

While fuel prices have certainly had an impact on UV sales, their charm isn’t expected to die down so soon with the next calendar year lined up with a slew of highly anticipated new model launches. The Tata Harrier, Nissan Kicks, Kia’s SP Concept and Mahindra’s project S201 are all set to keep customers intrigued with their style, features, and the quintessential SUV feel. Stay tuned for more.