The continuing battle between India’s best-selling scooter and motorcycle each month is also a story of the battle between the two former partner companies. 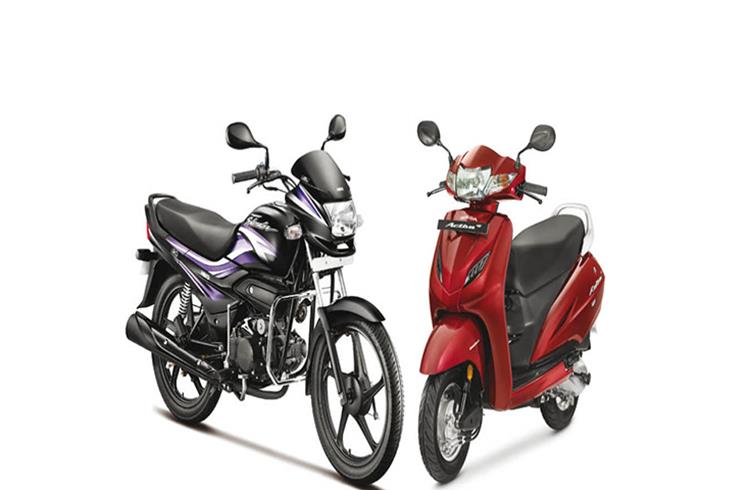 The sales trend of the Honda Activa and Hero Splendor outselling each other over the last four months to become India’s bestselling two-wheeler brand is what exactly replicates Honda’s aggression and Hero MotoCorp’s line of defence. While in March and May, the Hero Splendor raced ahead of the Honda Activa, the latter outperformed the former in April and now in June 2018.

Honda Motorcycle & Scooter India has reportedly despatched 292,294 scooters under its Activa umbrella to its local dealerships in June, up an impressive 24.50 percent YoY. This could be directly attributed to the surge in demand for scooters across the urban, semi-urban and rural markets as a result of the good ongoing monsoon season.

According to industry data, Honda’s Activa scooter despatches outperformed that of Hero Splendor’s by 14,125 units for the last month. Hero MotoCorp reportedly shipped 278,169 units of its Splendor motorcycles feeding its dealerships across the country. This underlines a good 26.96 percent growth on a YoY basis, clearly suggesting that the market is on its way to chart a historic season this fiscal.

Hero MotoCorp’s second bestselling two-wheeler brand, the 100cc HF Deluxe mass commuter motorcycles, is at No. 3 with total domestic sales of 182,883 units in June. The HF Deluxe remains a consistent performer for the company registering a substantial YoY growth of 18.25 percent.

Besides the top three best-selling two-wheeler brands, there is no other popular marque that sells a monthly number of more than 100,000 units. This underlines the sheer domination of the top three performers – Honda Activa, Hero Splendor and Hero HF Deluxe – in terms of the market demand and trust they have achieved among the regular and average buyers in the domestic market.

At No. 4 is the Hero Passion, the third top seller from the company’s large portfolio of commuter motorcycles. Hero has despatched 97,715 units of its Passion motorcycles in June thereby recording a good growth of 27.56 percent YoY. This can be directly attributed to the launch of new 110cc Passion Pro and the XPro models in March 2018.

Honda’s second most popular brand is its 125cc motorcycle bestseller – CB Shine, which has registered demand of 96,505 units in June and thus stands at the fifth position in the Top 10 two-wheelers list. The Honda CB Shine has clocked a YoY growth of 39.64 percent and it continues to retain its leadership in the said category.

Registering a good upswing in its monthly demand, Bajaj Auto’s Pulsar brand, which ranks sixth, has reported despatches of a total of 71,593 units in June, up a whopping 90.90 percent YoY. The Pune-based motorcycle manufacturer had despatched only 37,503 Pulsar motorcycles in June last year owing to a sharp decline in its market demand. The surge in demand for Bajaj Pulsar can be attributed to the recent launch of the Pulsar Twin Disc variant and the Pulsar Classic 150, which appears to be the company’s shot at making the brand more pocket friendly attracting young buyers through this season. The Pulsar Twin Disc, on the other hand, is also understood to have recorded good reception in the local territories.

At No. 7 is TVS Motor’s iconic XL Super, which has reported despatches of 66,791 units in June. In June last year, the company had shipped out 65,302 units across its local dealerships.

TVS Jupiter, the only other scooter brand apart from the Honda Activa, is the tenth bestselling two-wheeler with sales of 59,729 units in June. The TVS Jupiter’s performance, however, has remained flat as the company had dispatched 60,570 units in June last year.

With two-wheeler sales on the upswing, it would be interesting to see how the top selling brands perform in the coming months in FY2019. 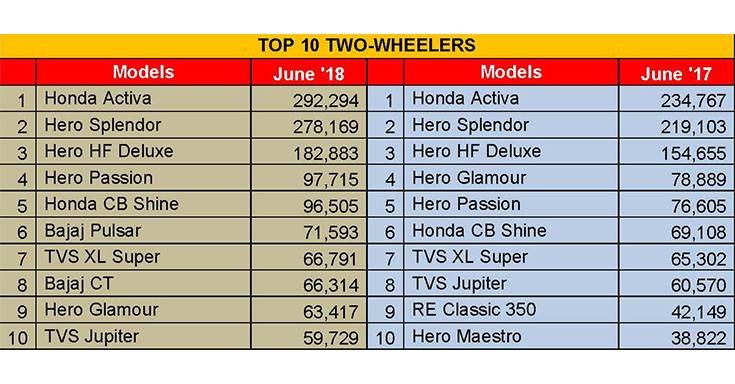