The entry-level hatchback maintained its hold on the Indian PV segment even as the country’s largest carmaker saw all of seven models dominate the Top 10 chart. 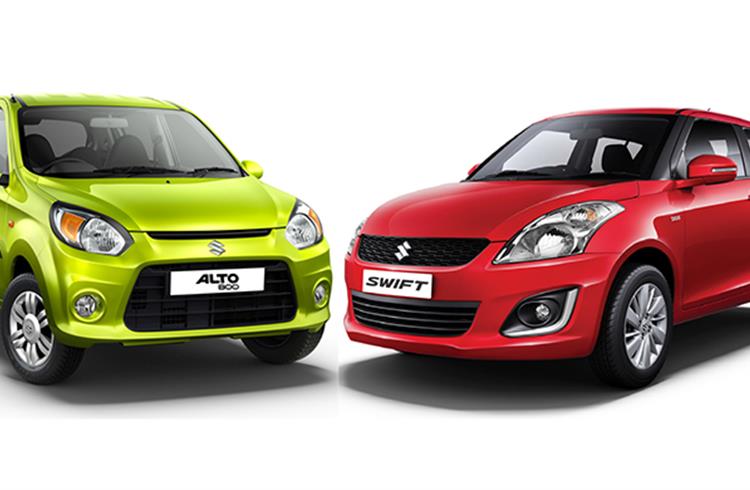 Even in a slowing market which saw the Top 10 passenger vehicles (PVs) shrink 17 percent in FY2020 on a year-on-year basis, Maruti Suzuki India has its reasons to celebrate with the carmaker still holding up a tough fight amidst highly aggressive competition and lacklustre consumer demand, added to which is the prolonged economic slowdown and the more recent lockdown.

The company, which saw seven of its models dominate the final Top 10 chart for the outgoing financial year, contributed nearly 80 percent to the cumulative 1,423,977 units sold in the year, a 17 percent de-growth over the sales of 1,711,283 in FY2019.

Its cheapest and oldest-selling model, the Maruti Alto went home to 190,814 buyers, which while substantially declining from its earlier tally of 259,401 units in FY2019 (-26.44%), ended up racing ahead of its younger but more expensive sibling Maruti Swift, which clocked overall sales of 187,916 units – setting the two apart with a rather minute difference of 2,898 cars.

The Swift had sold 223,924 units in FY2019 and had secured the No. 3 position then, sitting behind the Dzire and Alto which came second and first, respectively. The insignificant difference between the sales of the Alto and Swift, which forms mere 0.2 percent of the company’s total sales in FY2020 standing at 1,414,346 units (FY2019: 1,729,826 / -18.2%), clearly determines the shifting goalposts in the Indian PV market, where even first-time buyers are loosening their wallets and increasingly choosing B-segment cars.

Maruti’s Baleno, Dzire, Wagon R, Eeco and Vitara Brezza went on to hold the next sequential five spots, totalling sales of 743,940 units and leaving the last three positions for arch rival Hyundai’s Elite i20, Grand i10 and Venue models, respectively, which collectively sold 301,307 units and formed the remainder 20 percent of the Top 10’s volumes.

Maruti Suzuki India also had a first-mover advantage over its rivals in FY2020, having structured its BS IV to BS VI transition in a phased manner much in advance over the April 2020 deadline. It had commenced only-BS VI production for the Alto and Baleno as early as April 2019 with the Wagon R and Dzire following suit two months later. Interestingly, the company has outdone itself by selling more BS VI vehicles within a span of 12 months in the last financial year as compared to the total number of BS IV models it could sell since the technology became an emission norm starting 2010.

Now, as the entire country switches to the cleaner emission standards, mandating all vehicle manufacturers to adhere to the regulations and their corresponding technology requirements, it would be interesting to see how the market reacts to Maruti’s decision of keeping away from diesel engines altogether.

While the company has cited cost constraints and thus viability from a customer’s perspective in upgrading from BS IV to BS VI diesel engine technology, its rivals, especially Hyundai Motor India have not lost hope on the more fuel efficient engine technology just yet.

Will Maruti still have a significant presence in FY2021’s Top 10 PVs chart? We will watch along as things unfold month on month.