Top 10 Passenger Vehicles – September 2018 | New Maruti Swift back on top after 4 months but will it sustain the momentum?

The cute hatchback reigns over the other Marutis and three Hyundais but will the car's two-star rating in the Global NCAP crash test impact sales in the future? 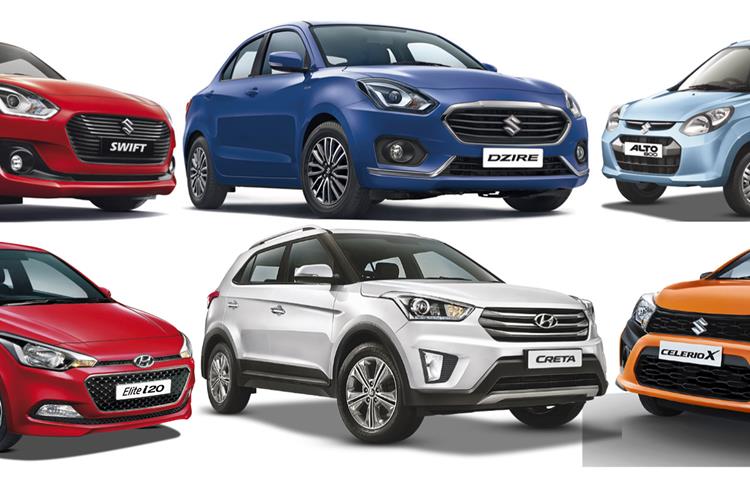 In the tussle to be No. 1 among Maruti cars, it's the new Swift which takes top dog status in September 2018. The cute hatchback retakes the top spot after four months: in April 2018, it was India's best-selling PV, barely two months after it was launched in the domestic market.

On June 13 this year, the third-generation model drove past the 100,000 sales milestone within just 145 days of its launch at the 2018 Auto Expo. The Swift, in its latest eye-catching avatar, has been wooing buyers with its contemporary design language, roomier cabin, plentiful feature set and potent set of engines. Now, what remains to be seen is whether the Swift, which received a low 2-star ratings in the recent Global NCAP crash test, continues to wow Indian car buyers. Buyers, particularly in metros and urban India, gradually becoming more conscious of the need for improved safety in the vehicles they own and drive, will be looking to spend their money on safer cars in the future.

Meanwhile, the Maruti Alto, now relegated to No. 2 position, sold 21,719 units, indicating that it is still the choice of entry level buyers in town and country.

In third place is the new Maruti Dzire with sales of 21,296 units. The sedan, which has wowed its way into Indian families' hearts and which had topped the chart for two months in a row (June and July 2018), had made news in June by becoming the top-selling car in the country, dethroning its younger and cheaper entry-level Alto sibling. The third-generation Dzire is a more wholesome package than its predecessors, has more cabin space and a larger boot too. Importantly, it has frugal petrol and diesel engines, the former smooth and enjoyable while the latter are a tad clattery.

Maruti Suzuki India, which maintains a stranglehold over the PV market with a dominant 52.10 share, has sold a total of 908,801 PVs in the April-September 2018 period, which constitutes  10.50 percent YoY growth. Nonetheless, reflecting the industry's fortunes in September, it sold a total of 151,512 units last month, posting flat growth of 0.66 percent.

The Baleno, Maruti's premium hatchback sold through the Nexa channel, takes the No. 4 spot, with overall sales of 18,631 in September 2018, considerably better than its sales performance a year ago (September 2017: 16,238).

Driving in at No. 5 is Maruti's game-changing compact SUV and the country's UV leader, the Vitara Brezza. With sales of 14,425 units in September 2018, the practical, spacious and well-equipped SUV remains a popular buy.

At No. 6 is tall boy and entry level hatchback, the Maruti Wagon R which sold 13,252 units last month, keeping its appeal going strong with family buyers scouting for a practical and spacious offering.

Hyundai Motor India models take the next three positions. At No. 7 is the Hyundai Elite i20 with sales of 12,380 units. The updated version of the i20 launched at the 2018 Auto Expo has a lot going for it. The car now offers a crisper touch-screen infotainment system, smarter alloy wheels, as well as a CVT mated to its 1.2-litre petrol engine.

Up next is the Hyundai Grand i10 with sales of 11,224 units, down from the fifth rank it enjoyed last September. The Grand i10 seems to be feeling the pressure of the gradual shift of entry level car buyers to more premium offerings. Nonetheless, the Grand i10 continues to be offered with an exhaustive list of comfort and design features, making it a practical buy for families.

At No. 9 is the Hyundai Creta which went home to exactly 11,000 buyers, four positions behind the only other UV in the Top 10 list – the Vitara Brezza. In June 2018, the Creta had beaten the Brezza to top spot with sales of 11,111 units, but the Brezza has bounced back since then and is back to being UV major domo.

The Maruti Celerio returns to the Top 10 list with sales of 9,208 units. The refreshing of the model with the X variant seems to have injected new pep into the vehicle's sales.

With the festive season underway, PV manufacturers are offering considerable discounts to woo buyers into their showrooms across the country. But will the Indian car buyer, harangued by sharply rising fuel prices, bite? Find out next month.