While Tata Motors, with its Ace range, is still the market leader in the 2T mini-truck segment, Mahindra & Mahindra rules the roost in the 2- to 3.5T pick-up segment. And the battle's set to turn even more exciting. 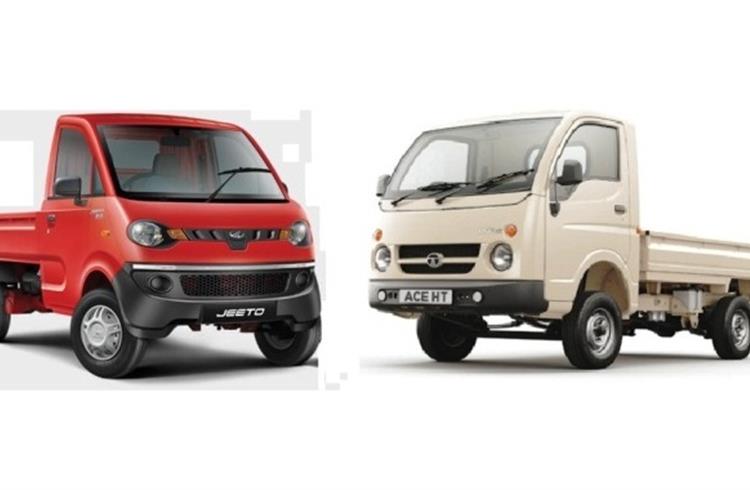 Tata Motors, which has embarked on an aggressive growth strategy to regain lost market share in the medium and heavy commercial vehicle (M&HCV) segment, is now making similar moves to cement its leadership position in the light commercial vehicle (LCV) market.

The up to 3.5T LCV segment, which sees Tata Motors and M&M battle for gains, has seen brisk growth over the past few years. Tata Motors, which created the mini-truck segment by introducing the Ace in 2005, dominated the market till Mahindra & Mahindra (M&M) entered various LCV segments challenging its longstanding leadership.

At present, in the 2-tonne mini-truck segment, Tata Motors, with the Ace range, is still the market leader enjoying a market share of over 60 percent. However, M&M with its Jeeto range of small trucks is slowly but steadily increasing its market share. During April-September 2017, the 2-tonne mini-truck segment saw sales of 67,060 units, up 23 percent YoY (April-September 2016: 54,478). Tata Motors with total sales of 43,436 units is a clear market leader with 64 percent market share. M&M is steadily gaining market share in the category with total sales of 19,055 units during the period, which translates to a market share of 28 percent.

In order to protect its LCV turf , Tata Motors expanded its Ace range of small CVs with three new XL range vehicles in July, all with a starting price of Rs 308,000 (ex-Mumbai). This move is likely to help the company to strengthen its grip in the segment.

M&M's market share picks up in 2-3.5T pick-up segment
The 2.5-3 tonne pick-up segment, which is the single largest category in the LCV goods carrier segment, has been virtually dominated by M&M for years with a share of over 60 percent of the market, thanks to the strong performance of the Bolero pick-ups.

What’s driving demand for pick-ups in the 2- to 3.5-tonne segment is the development of satellite towns and expansion of urban India along with new marketing phenomena like e-commerce. As a result, distribution requirements have changed, paving the way for bigger and more powerful vehicles, transporting heavier loads, over longer distances.

Tata Motors has been fighting it out with the market leader with its Ace family of products including the Super Ace and Tata 207, and also the Xenon pick-up. However, they have done little to disrupt M&M’s continued charge. Taking a fresh approach, in January this year, it has introduced the Yodha Xenon Pickup. The all-new pick-up, which is targeted at a wide range of commercial applications with claimed USPs of high level of performance and lowest operating cost, is squarely targeted at the Mahindra competition. The Yodha, with a starting price of Rs 60,000, has a rated payload of up to 1,250kg, and is available in 4×4 and 4×2 options in single-cab and double-cab versions.

Sales data for the first half of  fiscal year 2017-18 suggestd that Tata Motors has been able to dent M&M's market share by gaining higher volumes compared to the same period last year.  During April-September 2017, the 2-3.5 tonne pick-up segment registered total sales of 114,612 units, up by 19 percent (April-September 2016: 96,159). M&M with total sales of 70,864 units commands a 61.8 percent market share in the category. However, the company lost nearly 4 percent market share in the category compared to H! FY2017.

Tata Motors, which sold 25,806 units for a market share of 22.5 percent, has clearly gained through a month-on-month increase in sales in the 2-3.5T segment. In April, Tata Motors sold 2,644 units in the category and gradually more than doubled its monthly sales to 5,569 units in September, aided by the Yodha.

Revealing the company’s strategies to turn around its CV business to Autocar Professional, Girish Wagh, Head - Commercial Vehicles, Tata Motors' CV business said, “We are focusing on two main pillars of sales enhancement and cost reduction. To increase our sales enhancement, we are increasing our engagement with the customer, dealers and other stakeholders. We are also working on discipline execution to bring our new products on time.”

He admits that Tata Motors was playing the catch-up game, till the end of FY2017, in the LCV market which has seen multiple sub-segmentation and the entry of many new players over the last few years. "Now with the launch of the XL series of our vehicles - Zip, Ace and Mega - as well as the launch of the Yodha, I think we have a strong product in each of the sub-segment, which is what is helping us improve our market share this year," says Wagh.

The job is not done yet. Wagh and his team have clear goals to achieve in the turnaround drive. "The focus is now to anticipate what further changes are going to happen and how do I remain ahead of the curve," he says. Tata Motors' product strategy and its products' market performance in the coming quarters will reflect how well the team has realigned its approach to the LCV market which has seen major changes since the time the Tata Ace created a stir in the industry.

But do not discount M&M either. The company, which is reaped huge gains from the smart growth in the pick-up segment, will be doing all it can to not only stave off a re-energised Tata but will also go all out to protect its turf. What this means is that the already exciting battle will turn even more dynamic. Stay tuned for further updates.