Launched barely three months ago, the TVS NTorq with sales of 14,695 units ranks eighth and looks to strengthen its position in the coming months. 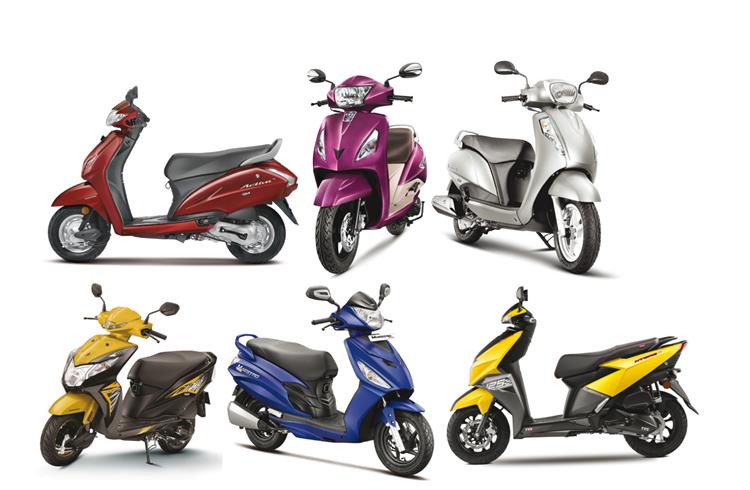 TVS Motor Co’s latest scooter offering – the 125cc premium NTorq – has debuted in the Top 10 scooters list barely within three months of its launch. The model, priced at Rs 58,570, is seeing a robust market response for the company’s focus on quality, attention to detail and value-for-money features, has beaten Honda’s Grazia – its arch competition – in the premium 125cc scooter segment. The Grazia had broken in the Top 10 in November 2017, the first month of its launch.

The TVS NTorq 125 has sold 14,695 units in May 2018, ranking eighth in the country’s best-selling scooters list. The Honda Grazia, on the other hand, has sold 12,068 units last month, slipping to tenth position from sixth in April 2018. Honda had sold close to 26,000 units of its 125cc Grazia scooter in April. The reasons behind the sharp decline in the month-on-month sales volumes are still unclear. TVS plans to sell around 200,000 units of the snazzy NTorq 125 in its first year of commercial sales (including exports).

Meanwhile, the performance of the TVS NTorq 125 appears to be on track now, given that the company aims to sell about 200,000 units of this model in its first year of commercial sales (including exports). Both scooter models, which are new in the market, are expected to play pivotal roles in setting up the tone for the 125cc scooter category over a period of time. This segment is also going to see new models (Maestro Edge 125 and Duet 125) from Hero MotoCorp riding in very soon.

Meanwhile, at the top of the chart, the contenders remain unchanged with the Honda Activa leading the scooter market with massive margins. The Activa sold 272,475 units in May 2018, down by 3.54 percent YoY.

Interestingly, the Suzuki Access 125 appears to have sealed its position at No. 3 with domestic sales of 46,217 units, up an impressive 44.90 percent YoY. This model from the stable of Suzuki Motorcycle India continues to be one of the most trusted scooters in the domestic market. While the Access 125 is the largest selling Suzuki two-wheeler in India, it has also played its own critical role in driving the scooterisation across regions over the last decade.

Nevertheless, the company has been sluggish in terms of scaling up its operations (across manufacturing and retail) despite having a winning scooter with credible brand recognition at hand. Despite mounting competition from the rivals in this premium space, the Suzuki Access 125 continues to be the largest selling 125cc scooter in India.

Honda’s 110cc Dio is the fourth largest selling scooter in India with sales of 32,899 units. While YoY volumes have declined by 20.35 percent, demand for the Dio, which is a popular scooter amongst young college goers, is expected to bounce back with the start of the college season during June-July 2018.

Hero’s 110cc Maestro and Duet brands rank fifth and sixth in the Top 10 scooters list with sales of 23,509 units (down by 34.32 percent YoY) and 19,741 units (up 2.85 percent YoY) respectively. The sharp decline in Hero Maestro’s volumes is assumed to be a result of an inventory adjustment by the manufacturer.

Yamaha’s 113cc Fascino model ranks seventh with sales of 15,132 units, down by 12.24 percent YoY. The company has visibly taken some measures in the form of new marketing campaigns and initiatives to resurrect the sales of its bestselling scooter in the domestic pockets. It can be recalled that at one time Yamaha was selling about 25,000 units of its Fascino scooter every month, which had led to a sharp growth in its scooter market share.

It would be interesting to note how these models change their respective positions once the demand for scooters picks up in June and in the subsequent months.