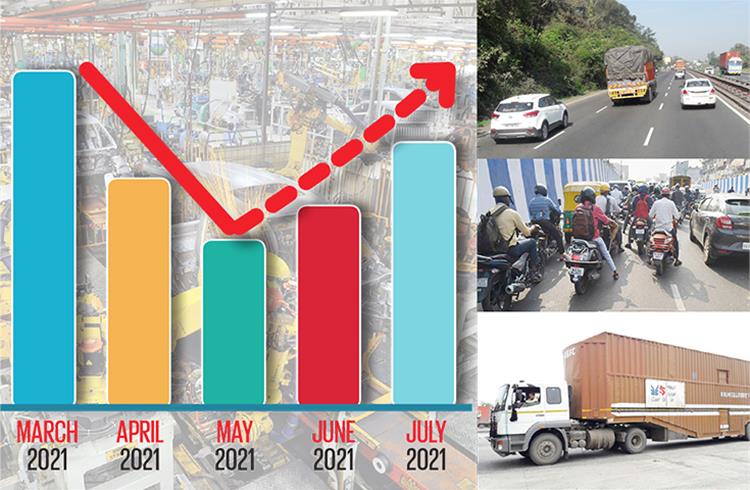 Despite the global semiconductor shortage that is severely impacting automobile production the world over, the Indian automobile industry registered good volumes in July 2021.

As per the data released by the Society of Indian Automobile Manufacturers (SIAM), the overall sales at 1,536,267 units across the passenger vehicle (PV), two-wheeler and three-wheeler segments registered a 4 percent year-on-year (YoY) growth compared to 1,476,861 units sold in July 2020. What’s even more impressive is that on a month-on-month (MoM) basis, there is a notable 18 percent uptick over June 2021’s 1,296,807 units.

However, when compared on a month-on-month basis, the two-wheeler segment has performed significantly better in July over June, recording a 19 percent uptick over 1,055,777 units of June 2021. While motorcycles registered a reasonable MoM growth of 8 percent over June 2021’s 777,100 units, scooters recorded a strong uptick of 52 percent over June’s 241,689 units.

A gradual unlocking of the urban centres with people moving out of homes to work and preferring a personal mode of transportation could be seen as the key reason driving revival of the scooter segment. On the other hand, the impact of a good monsoon would start becoming prominent on motorcycle sales in rural India around the festive season in the months of August and September.

Furthermore, the trend that is worth noticing in the two-wheeler segment is the remarkable growth in the sales of e-two-wheelers. From being pegged at mere 143 units in July last year, the sales have grown exponentially by 788 percent to 1,270 units last month. On a month-on-month basis too, there is respectable 16 percent growth over June’s 1,091 units.

Wallet-bursting fuel prices and a dollop of incentives from multiple states and Centre for early adoption of electric vehicles has clearly given an impetus to electric two-wheeler sales.

The performance on a month-on-month basis is also quite impressive, with an average growth of 90 percent across goods and passenger carrying three-wheelers.

Commercial vehicles
While SIAM did not disclose the performance of the commercial vehicle segment, the individual Q1 revenues released by major players such as Ashok Leyland hint that there is a revival of demand particularly in the M&HCV segment with infrastructure activity finally on its way back to normalcy.

Growth outlook
The July numbers are clearly telling that the lost momentum due to the second wave of the pandemic is now finally in place, but, while still throwing a caution about the threat of a third wave or the prolonged chip shortage, on the production and sustained demand in the sector. A good monsoon, however, still augurs well to spur rural sales in the coming months when the festivities commence in the month of August. We will keep a tab on the growth trajectory. 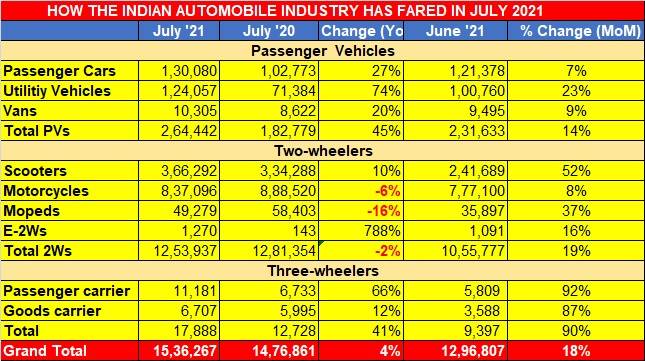