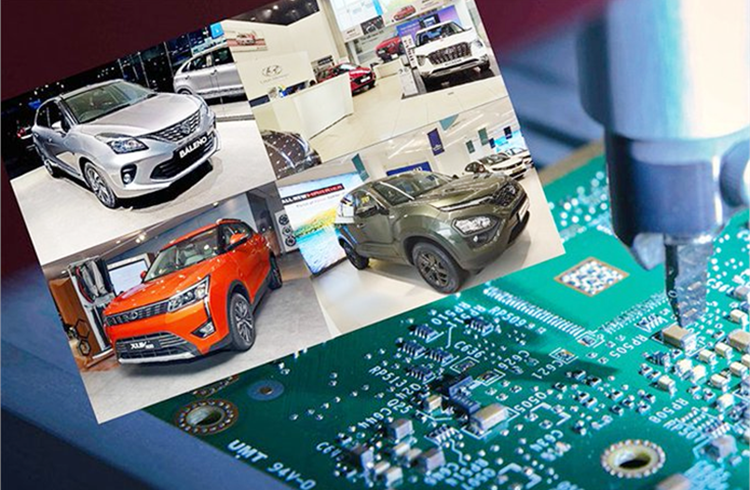 With pent-up demand from the early part of CY2021 over by end-July or early August, India Auto Inc could be headed for another round of slow sales. Ample proof of that is in the cumulative sales numbers of the passenger vehicle, two-wheeler and three-wheeler segments for the month of August.

As per the data released by the Society of Indian Automobile Manufacturers (SIAM), at 1,586,870 units, overall vehicle sales are down 11 percent of year-ago sales, which stood at 1,790,115 units in August 2020. While last year itself was a low base,with marginal growth of 3 percent over July 2021 sales of 1,536,267 units, things are not exactly looking bright for OEMs.

Add to that the burgeoning crisis of semiconductor shortage, which has seen many majors announce sizeable production cuts in September. Maruti Suzuki India (by 60%) and Mahindra & Mahindra (by 25%) are two such carmakers; what one gets is a situation not what captains of the industry would have liked just before the advent of the festive season in India.

The stark shortage of semiconductor is driving waiting periods up to 8 months and as high as 12-15 months in case of popular models like the Mahindra Thar and Hyundai Creta.

With the gradual reopening of urban India, scooters remained almost flat at 451,967 units (August 2020: 456,848 / -1%), whereas the motorcycles registered a significant 20 percent YoY de-growth, going home to 825,849 buyers (1,032,476). Industry experts believe that the aftereffects of a good monsoon will only be seen in the rural sales around the festive season.

On the other hand, electric two-wheelers have come a long way during the last year and clocked sales of 1,013 units in August (August 2020: 215 / +371%). But the semiconductor shortage is clearly affecting these electronics-intensive machines as well which have registered a 20 percent MoM decline over 1,270 units sold in July.

SIAM has not revealed the wholesale numbers for commercial vehicles.

Growth outlook
Despite improving consumer sentiments and the onset of the festive season, the prevalent challenges in the automotive industry are posing huge roadblocks for the sector to attaining a seamless growth momentum. The semiconductor crisis is worsening into a nightmare for suppliers and OEMs, which are struggling to sustain uninterrupted production at their assembly lines. The firefighting continues and it is the consumer who is likely to end up waiting more for a new car in the foreseeable future as well. 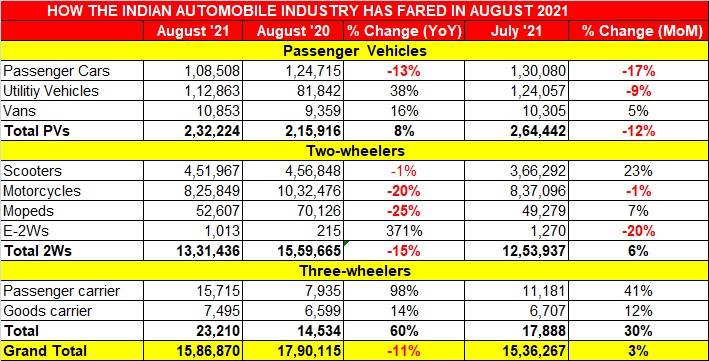