June wholesales for top-15 car manufacturers grew 148 percent on a month-on-month basis after a lockdown-hit May. 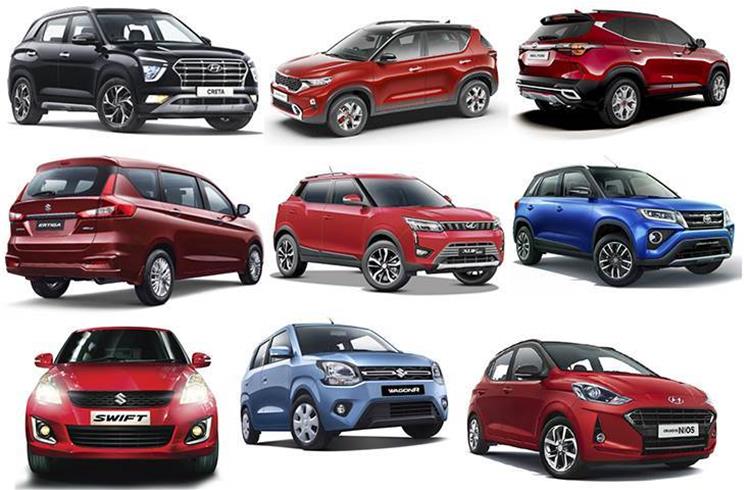 After witnessing a sales setback in May due to several state-wise lockdowns amidst a second Covid wave in the country, the passenger vehicle (PV) segment in India is representing a strong comeback in June, driven primarily by pent-up demand.

The wholesales (factory-to-dealer despatches) numbers for the top 15 carmakers in the country have registered a 148 percent month-on-month (MoM) growth in June to sell a cumulative 255,674 units (May 2021: 103,170). While it wouldn’t be prudent to draw a year-on-year comparison as June 2020 was itself a poor month with weak sales of 116,928 units due to the prevalent Covid situation, there’s a 119 percent growth still.

Its entry-level duo of Alto and S-Presso could only garner 17,439 units, revealing a lack of demand to the full extent, but SUVs including the Vitara Brezza, Ertiga, XL6, S-Cross and Gypsy went home to 28,172 buyers – much higher than even April 2021’s 25,484 units.

The septet of the high-selling Wagon R, Swift, Ignis, Baleno, Dzire, Tour S and Celerio cumulatively sold 68,849 units, a shade lower than 72,318 units sold in April 2021. The Celerio, which is due for a full-model change is expected to get a complete overhaul in the H2 of this calendar.

The company had despatched 1,360 units of the latest SUV to dealers ahead of launch, and had claimed receiving over 4,000 bookings until the price announcement.

According to Tarun Garg, director, Sales, Marketing and Service, HMI, “With markets opening up and improvement in customer sentiments, we are committed to exceed our customers’ aspirations.”

Tata Motors has also introduced a new affordable variant of its entry-level Tiago hatchback. The Tiago XT(O) has been priced at Rs 548,000 ex-showroom, India, and while it’s based on the XT variant, it does not get the 2-DIN Harman Kardon infotainment system and comes Rs 15,000 cheaper.

Kia India (15,015 / +36%)
For this Korean carmaker, June registered a month-on-month growth of 36 percent to cumulatively sell 15,015 units, over May’s 11,050 units. The company is gunning for speedy sales in this fiscal, and as a result, had introduced the refreshed Sonet and Seltos in May with feature rejigs and some variant consolidation.

According to Tae-Jin Park, Chief Sales and Business Strategy Officer, Kia India, “The last few weeks have shown signs of improved customer sentiment, and we continue to be optimistic about the future. The brand stays focused on providing the highest level of personalised customer experience and plans to strengthen the digital ecosystem with industry-first initiatives like Digi-connect. We, however, remain cognisant of the ongoing situation and are reviewing our operations week-on-week, evaluating measures to meet the demand for our vehicles.”

Toyota Kirloskar Motor (8,798 / +1,144%)
Japanese carmaker Toyota Kirloskar Motor (TKM) despatched 8,798 units last month (May 2021: 707 / +1,144%). The company, which had announced to undertake a maintenance shutdown between April 26 and May 14, saw the closure getting extended due to the government-imposed lockdown in the state of Karnataka. It was only on June 15 that TKM was able to restart operations at its manufacturing facility in Bidadi with a 50 percent workforce strength.

TKM is working to reduce the delivery lead times on its two key models – the Fortuner and Innova Crysta – and also intends to inform customers with accurate waiting times.

According to Rajesh Goel, SVP and Director, Marketing and Sales, Honda Cars India, , “Our June despatches were in line with our production output, which were maintained at below 50 percent of pre-Covid level. With unlocking of many states and reopening of dealer outlets in most markets, we expect car sales to further pick up from this month onwards and we will accordingly ramp up our daily production. We hope that this positive momentum will continue, thereby, helping the industry recover, however challenges of Covid-related disruptions and rising ownership costs due to higher raw material prices remain.”

MG Motor India (3,558 / +250%)
MG Motor India sold 3,558 units in June, and registered a significant 250 percent month-on-month growth compared to 1,016 units sold in May. With a phased unlocking, the carmaker says it is witnessing a notable increase in inquiries as well as bookings.

According to Rakesh Sidana, director, Sales, MG Motor India, “We are seeing early signs of positive consumer sentiment in June and potential purchase due to pent-up demand, which was on hold due to the second wave. Even though some markets are still under lockdown, the ramping up of the vaccination drive has brought hope and we expect the demand to further grow during the festive season. However, we have to remain cautious of the potential threat posed by the third Covid wave.”

Nissan India (3,503 / +184%)
Nissan India clocked 3,503 units in June, registering a 184 percent month-on-month growth compared to May 2021’s sales of 1,235 units. Its Magnite compact SUV, which has sold 15,000 units since launch in December last year is the key product for the Japanese automaker and the company has also commenced CSD sales to defence personnel. To reduce the waiting period on the Magnite, Nissan also intends to ramp up production at its plant in Chennai by putting in a third shift in place.

According to Rakesh Srivastava, managing director, Nissan Motor India, “The last month had multiple Covid-related challenges of lockdowns and restrictions, impacting production and channel operations.While keeping people safety first,we collaborated with vendors and channel partners towards servicing the demand of customers. With news of a good monsoon, we are preparing for a positive season by restarting the third shift at the plant to service the demand for the Magnite.”

Volkswagen India (1,633 / +15%)
The German carmaker registered growth of 15 percent with overall sales of 1,633 units in the month (May 2021: 1,425). While it introduced the updated Polo hatchback with an automatic transmission option in the mid-spec variant on June 3, the company is gearing towards the launch of its Taigun compact SUV based on the Skoda Kushaq.

Jeep India (789 / +66%)
Jeep India clocked 789 units, registering a 66 percent month-on-month growth over May’s 475 units. The Compass SUV is the company’s bread earner at the moment and in its latest avatar, is gelling well with buyers owing to its design, performance, and spruced up interior. However, the SUV is priced at a premium and that is one of the contributory factors in its slow sales.

Skoda Auto India (734 / +3%)
VW Group brand, Skoda clocked 734 units last month to maintain flat performance. However, the carmaker introduced its highly-anticipated Kushaq midsized SUV on June 28, announcing its comeback with a renewed focus under the India 2.0 strategy. While the Kushaq aims to rival the mighty Hyundai Creta and Kia Seltos, the pricing which starts at Rs 10.50 lakh and goes all the way to Rs 17.60 lakh for petrol-only engine options, might deter its aggression in front of the well-priced, feature-packed Koreans.

Citroen India (41 / +2%)
French carmaker Citroen India could sell only 41 units of its maiden C5 Aircross SUV, maintain a flat performance with 40 units sold in May too.

Growth outlook
While the much-improved PV sales numbers coming in June are welcome news for an industry which has been knocked around by lockdowns, pandemic-induced lack of demand and poor consumer sentiment, it remains to be seen if the growth momentum can be sustained.

While there is no doubt that new product launches will help drive some excitement among buyers and that the SUV segment retains its consumer-pulling power, it is important that the sentiment also filters to the entry level hatchback segment and the other sub-segments which have been feeling the heat since the beginning of the year. 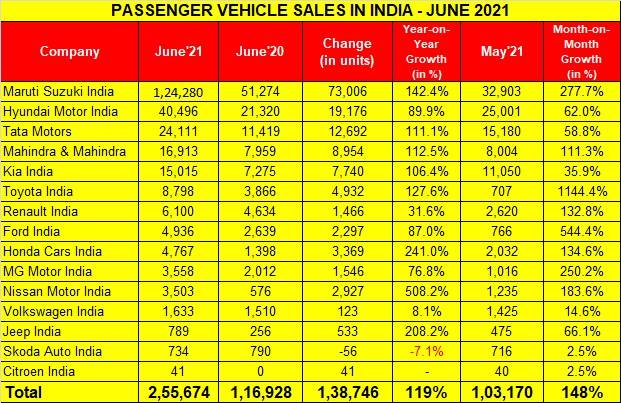