The newest Maruti, the Swift is an instant hit and has sold 17,291 units in its maiden month of sales. Mahindra Bolero bounces back, garners strong demand following the company's strategy to target Tier 2, 3 and 4 cities. 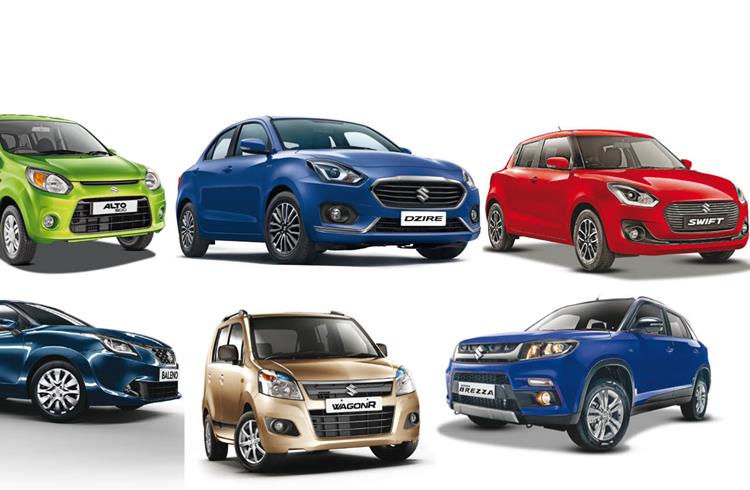 The month of February saw the passenger vehicle (PV) industry continue its ongoing sales pace and maintain a strong momentum which is set to help the industry finish the fiscal on a high note. Total passenger vehicle sales last month stood at 275,329 units, registering a growth of 7.77 percent (February 2017: 255,359).

A total of six models from the company’s line-up continued to dominate the list of Top 10 best- selling PVs in the month, with the entry-level Maruti Alto topping the charts and selling 19,760 units, maintaining flat growth of 1.20 percent  (February 2017: 19,524). The other five Marutis in the Top 10 list – the Dzire, Swift, Baleno, Wagon R and the Vitara Brezza – together account for a total of 96,291 units or 70.46 percent of the carmaker’s total PV sales in the month.

Following its smaller sibling is the Dzire compact sedan, which, in its third-generation avatar, has taken the market by a storm and continues its strong surge, selling 17,784 units and growing at 7.04 percent (February 2017: 16,613). With an already strong brand name, which was built upon practicality and comfort, the new car has taken the game up by a few notches with its considerably improved design, host of modern features and increased dimensions offering a lot more space on the inside than the outgoing car.

At No. 3 is the latest kid on the block, the third-generation of the Maruti Swift, which was launched at the Auto Expo and was an instant hit with showgoers. The allure has continued into the showrooms. This much-awaited model has sold 17,291 units in its maiden month of introduction, with sales surging at a notable 40.25 percent (February 2017: 12,328). The new Swift gets radical changes all across the car, with its styling getting bolder with touches like pillar-mounted rear door handles and dual-tone finished alloy wheels on the top-end trim. The car also brings a lot more convenience to the package, offering AMT in both its petrol and diesel variants.

At No. 4 is the Maruti Baleno, which went home to 15,807 buyers, registering a remarkable 106.41 percent year-on-year growth (February 2017: 7,658) and making its entry into the list, where it did not have a presence last year. The Baleno is positioned as a premium offering from the carmaker, but, with the launch of the new Swift, the gap between the two is only marginal. What could still work in Baleno’s favour is the option of a proper CVT in its automatic variant, and the 1.0-litre turbocharged petrol motor in its RS trim.

While the tallboy, Maruti Wagon R seized the No. 5 position, with sales of 14,029 units and posting a growth of 3.49 percent (February 2017: 13,555), the No. 6 spot was taken by Hyundai’s Elite i20, which sold a total of 13,378 units, growing a notable 28.46 percent (February 2017: 10,414). The i20 hatchback also received a makeover at the Auto Expo and the updated version of the car now gets some aesthetic tweaks on the outside including a redesigned grille, bumpers and tail-lamps. While there are subtle changes to the interior too, the most prominent one lies under the hood, where the car now gets a new 1.2-litre petrol-CVT combination in its automatic avatar.

At No 7, Maruti’s hot-selling UV offering, the Vitara Brezza sold 11,620 units, growing 15.66 percent, with sales in February 2017 standing at 10,046 units. The compact SUV is relentlessly driving the sales of the company from its high-perched driver’s seat, and contributed to over 57 percent of the company’s total UV sales in the month of February, which stood at 20,324 units, coming in from the pack of Gypsy, Ertiga, S-Cross and the Vitara Brezza.

The Hyundai Grand i10 took the No. 8 spot and sold 10,198 units, albeit declining 20.71 percent compared to year-ago sales of 12,862 units. Its elder sibling, the Hyundai Creta SUV bagged the No. 9 position and sold 9,278 units, consistently maintaining its strong affinity among buyers and growing 3 percent (February 2017: 9,002). The full-size crossover has sold a total of 97,125 units between April-February 2018 in the Indian market.

The rugged Mahindra Bolero closed the Top 10 tally by coming in at the last spot with sales of 8,001 units, drawing a robust growth of 24.20 percent (February 2017: 6,442). The tough UV is extremely popular in the hinterlands and its strong sales give a clear indication of the growth and infrastructural strides being made in rural India.

Mahindra’s seemingly ageless workhorse has made a comeback in the Top 10 best-selling vehicles’ list after 23 months. Speaking to Autocar India, Veejay Ram Nakra, head - Marketing & Sales, M&M, said, “The Bolero has garnered strong demand in the past six months after we put in place a comprehensive strategy for Tier 2, 3 and 4 cities and also rural markets”.

With favourable market conditions, strong customer sentiments and sales running in the fast lane, the Indian passenger vehicle segment is set for a record fiscal, expected to post a splendid overall performance towards the end of this month. Watch out this space as we bring more exciting numbers in just a few weeks’ time.