The resurgence in demand for passenger cars is clearly visible in Maruti’s performance with the Dzire, Baleno and the Swift each clocking nearly 20,000 units in the month and the Alto topping the charts with 21,890 units. 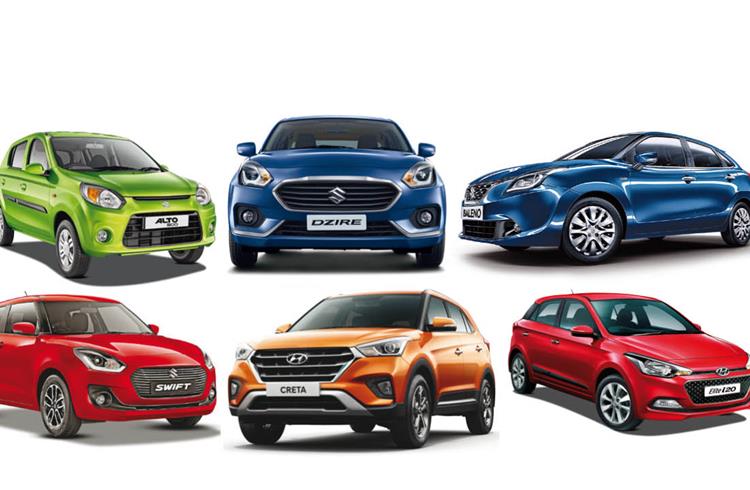 The Indian automobile industry is running strong in the ongoing fiscal, what with the PV segment clocking robust sales in May 2018 with an overall 301,238 units getting sold (+19.65%). While UVs were the driving force until a couple of months ago, it is the passenger cars which are making a comeback and how.

While the country’s passenger vehicle bellwether Maruti Suzuki India remained the top grosser, selling 161,497 units in the month and posting strong growth of 23.99 percent, the carmaker maintains its stranglehold with seven out of the 10 models.

The resurgence in demand for passenger cars is clearly visible in Maruti’s performance with the Dzire, Baleno and the Swift each selling nearly 20,000 units each in the month and the Alto topping the chart with 21,890 units. These seven models altogether delivered three-fourths of Maruti's cumulative volumes in May. These models also contributed 38 percent of the overall industry PV sales of 301,238 units in the month.

The Maruti Alto, the entry-level king emerged on top once again, selling 21,890 units and remaining the quintessential go-to option for any first-time, new car buyer on a budget. The Alto maintained its lead just like last year, when it had clocked 23,618 units in May 2017.

At No 2, the Maruti Dzire is making waves in the compact sedan space, with handsome sales of 19,735 units. The current-generation Dzire is one of the strongest selling models for the Japanese carmaker in India and has wooed buyers for its space, comfort, features and being all the more attractive in its present avatar. The Dzire can now only be unsettled by the recently launched second-generation Honda Amaze, which looks promising and ranks neck-and-neck with the Honda on most parameters.

Following the Dzire and gaining one position over last year, Maruti’s premium hatchback, the Maruti Baleno clinched the No 3 spot, with overall sales of 19,398 units (May 2017: 14,629). The hatchback being sold through the company’s premium retail network, Nexa, offers solid value in the form of a well packaged product along with offering a host of contemporary features including Bi-Xenon headlamps, an LCD unit acting as its multi-information display on the speedometer, and also being high on safety with dual airbags and ABS coming standard across its trims.

A regular in the Top 10 list, the Maruti Swift, in its latest avatar holds no surprises when it comes bagging the No 4 position in May, selling 19,208 units (May 2017: 16,532). The third-generation Swift has become an instant hit with buyers, what with the car already surpassing the 100,000 units mark within 145 days into its launch since February. Its radical design, contemporary features and potent powertrain choices are what are making it swiftly enchant the Indian folk.

The No 6 spot was secured by the Maruti Vitara Brezza, which went home to 15,629 buyers (May 2017: 12,375) and continued to maintain its position just like last year. The Brezza has a tremendous role to play in enhancing Maruti’s overall UV sales, which stood at 25,629 units, registering a growth of 13.36 percent over the year ago sales of 22,608 units. The compact SUV has recently been updated and now gets a new paint shade, standard safety features across variants, as well as the option of AMT in its mid-spec and top-spec variants.

At No 7 position, the Hyundai Creta jumped two positions and registered sales of 11,004 units (May 2017: 8,377). Hyundai also introduced the Creta facelift on May 21, which now receives a host of updates, including external styling tweaks at the front with a new updated grille, revised tail-lamps at the rear and new diamond-cut alloy wheels. The refreshed Creta also receives a sunroof, electronically adjustable driver’s seat and a wireless phone charger inside the cabin.

Another Hyundai, the Hyundai Grand i10 follows at the No 8 spot, with the B+ hatchback selling 10,939 units, albeit declining three positions over last year, when it clocked 12,984 units in May 2017.

The No 9 spot is taken by the Hyundai i20, which sold 10,664 units, and while it maintained flat sales which stood at 10,667 units a year-ago, it, however, also tumbled two slots in the tally. The i20, now in its facelifted avatar, gets a slew of exterior updates, including those to its grille, tail lamps, as well as alloy wheels. On the inside, while it gets refreshes to the touch screen infotainment system, the car now also comes offered with the option of a CVT-petrol drivetrain.

Closing the monthly Top 10 counter is the Maruti Celerio, which made a comeback into the list and sold 10,160 units in May, when it was not a part of the chart a year ago.

With passenger car models clocking substantially high volumes, the Top 10 PVs list clearly shows the trend getting back to fuel-efficient cars, which are holding their value in buyers’ minds at a time when fuel prices have been on an upward trend for a consistently long period.

In the April-May 2018 period, while UV sales moderated to a 14.71 percent growth rate with overall sales of 161,222 units, within the PV segment, passenger cars bounced back with sales of 399,662 units to post 11.77 percent YoY growth. Given the current trend, it is likely their pace of growth might sustain in the near future. Watch this space.