The Dhanteras-Navratri-Diwali combination in the same month of October has contributed to a spike in sales for major vehicle manufacturers but uncertainty still looms over the sustainability of the growth. 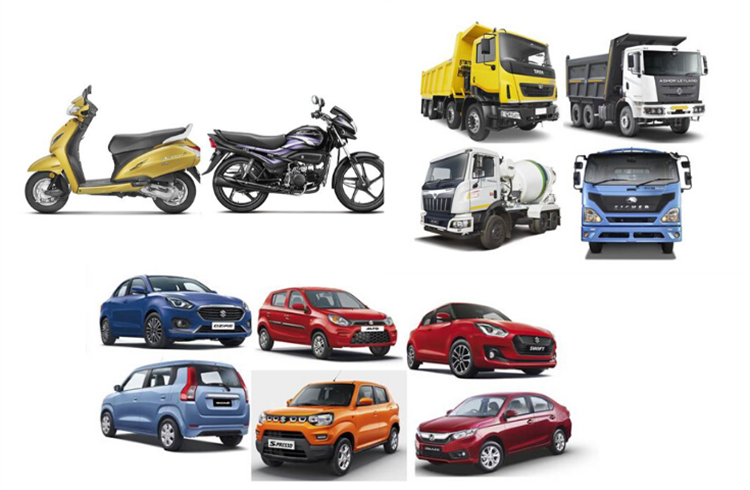 The October month sales reports from key vehicle manufacturers across segments show a mixed bag performance with many settling to observe a positive trend.

If OEMs across vehicle categories were expecting rocketing sales of the firecracker type in October, then they would be a tad disappointed. While some will have to stay content with logging Dhanteras sales records, others will be concerned why their armoury of sales tips and tricks failed to set the festive season on fire. October sales essentially have to be viewed in the background of abject poor year-ago sales, heavy discounting, the Dhanteras-Navratri-Diwali combination in the same month and the continuation of the country's economic slowdown. Add the wait-and-watch consumer approach to BS-VI and what you get is industry still in the throes of wanting a fix on achieving sustainable growth. Is this October performance sustainable in future months which have no festivity attached to them? Is the month-on-month growth in October 2019 real and can industry hold onto it in the next two months of this year before 2020 opens? Will customers continue to be fickle and will the government announce the much-delayed vehicle scrappage policy?

In a recent press conference, Rajan Wadhera, president, SIAM, had said, "While we have faced all sorts of challenges till now, we have started seeing some green shoots (of recovery) whether coming from the effect of the various measures announced recently by the government or due to the enhanced mood during the festive season."

"Retail sales over the auspicious Navratri period have been quite good for some OEMs. The festive season itself could be the flywheel which will generate the momentum for growth," had said the rather optimistic-sounding president of SIAM.

So, lots of questions and few answers at this stage. But here's looking at how the OEMs fared this October.

PV sales show month on month growth
Barring the country’s largest carmaker, all others have again posted a negative year-on-year (YoY) growth rate, but, show a considerably improving performance on a month on month basis.

Maruti Suzuki India, country’s largest carmaker, announced total domestic passenger vehicle sales of 139,121 units in the month, recording a marginal 2.3 percent growth (October 2018: 135,948). The company had also despatched 2,727 units of the Glanza hatchback to its partner Toyota which takes its total to 141,848 units and YoY growth to 4.3 percent. On a month on month basis, this is a marked improvement compared to the 110,454 units the company sold in September (+28.42%).

According to Vikas Jain, national sales head, Hyundai Motor India, “Hyundai Motor India has again outperformed despite long market slowdown registering highest cumulative sales of 63,610 units including exports in the month of October 2019 showcasing customer confidence and trust in brand Hyundai. Our top performing brands added joy to festivities of our customers with strong performance in a single month. We are confident that Hyundai Motor India would continue to march towards the year end on a positive note, meeting and exceeding our customers’ aspirations.”

Honda Cars India registered sales of 10,010 units in the month (October 2018: 14,233 / -29.67%). The company had sold a total of 9,301 units in September, thus, showing a positive sales trend month on month (+7.62%). According to Rajesh Goel, SVP and director - sales and marketing, Honda Cars India, “The festive season was rewarding for the auto sector after a prolonged slowdown. The high discounts and other festive offers provided by automakers across the industry resulted in positive consumer sentiment. At Honda, we also saw an increased sales momentum as compared to last few months and are hopeful that this trend will continue in the following months.”

Tata Motors sold 13,169 units in the domestic market but registering a sharp 28 percent YoY decline (October 2018: 18,290). But, when compared to the 8,193 units sold in September, the company observed a remarkable uptick in its performance (+60.73%). According to Mayank Pareek, president, Passenger Vehicles Business Unit, Tata Motors, “In line with our new paradigm, focus was on retail. Results have been encouraging with retails at 36 percent more than wholesale. Customer response was positive to festive offers and our new product launches like Harrier Dark edition and Nexon Kraz+. In October retail sales were the highest in this fiscal recording a 60 percent increase month-on-month.”

UV major Mahindra & Mahindra clocked sales of 18,460 passenger vehicles in the month, registering a 23 percent decline (October 2018: 24,056). In terms of SUV sales it reported sales of 17,785 units, down 20 percent YoY in October. However, like others, M&M too performed better than September when it had sold 14,333 units, thus, showing a 29 percent improvement. In a tweet, Pawan Goenka, managing director, M&M, said, “Congratulations to our dealer partners for delivering the highest retail volume for Mahindra last month. I hope the retail momentum in October is an indicator of the sentiment turning positive and will continue in the coming months.”

Two-wheelers upshift after Diwali sales
The festive season seems to have brought some cheer for the two-wheeler industry with few of them reporting MoM gains in the month of October in comparison to the month of September.

Koichiro Hirao, managing director, Suzuki Motorcycle India said, “We are proud to announce our highest ever monthly sales in October 2019.We feel excited to continue Suzuki’s growth-curve with highest-ever monthly sales, creating newer milestones for us.”

Sanjay Bhan, head – sales, aftersales and parts, Hero MotoCorp said, “The growth in retail sales during the festive period is in line with our plans. First-time buyers, who have always shown a strong preference for the range of products from Hero MotoCorp, have driven this growth. Specific markets such as Uttar Pradesh and Chhattisgarh – where the retail growth has been more than 15 percent - have also bolstered our overall retail growth during this festive season. Our motorcycle sales grew in double digits during this period, with a strong performance from our new range of premium motorcycles. The ‘Pleasure+’ scooter also generated substantial volumes during this festive season. We are optimistic of carrying forward the momentum in retail sales. Thanks to the record retail off-take, our inventory levels are now down to 30 days and future despatches are being planned in keeping with market demand. The despatch numbers for the month of October reflect our conscious effort at further correcting dealer inventories.”

This was also the month when Hero MotoCorp’s Haridwar manufacturing plant achieved the milestone of surpassing 25 million units in cumulative production.

Royal Enfield sold a total of 71,964 units in the month of October 2019, a YoY growth of 2 percent (October 2018: 70,451 units) and a MoM growth of 31 percent (September 2019: 54,858 units). Royal Enfield has further reported that the sales of the motorcycles upto the capacity of 350cc have declined by 5 percent but the sales of its models with engine capacity above 350cc, which includes the newly launched 650 twins - Interceptor 650 and the Continental GT 650 - have registered a YoY growth of 160 percent with 7,707 units. This segment also saw a 58 percent YoY growth in the April to October 2019 period with 53,220 units sold. The 650 twins’s Diwali sales seem to have really put the spark in Royal Enfield’s sales chart for this fiscal.

M&HCV sales show marginal uptick
The commercial vehicle sector is the barometer of an economy and when it comes to the domestic market, the segment has been witnessing quite subdued performance owing to the weaker economic sentiments in the recent past. However, October brought some positive news to the CV segment too with some key players observing a substantial month on month uptick.

The festive month of October has brought some cheer to the commercial vehicle manufacturers in the country. In fact, as per the sales number shared by the major OEMs of the country, the overall CV sales came at 61,948 units, translating to a growth of 14 percent over last month (September 2019: 54,142 units).

Commenting on the result, Girish Wagh, president, Commercial Vehicles Business Unit, Tata Motors said: "With our continued focus on retail acceleration, retails in October were 24 percent ahead of wholesale. Additionally, wholesales improved by 7 percent over September. The enquiries have increased compared to last month in M&HCV and I&LCV, with fleet owners initiating discussions for replacement of older vehicles. We will continue our focus on system stock reduction as we prepare for the BS VI transition. Overall system stock is now at a multi-quarter low, which coupled with increasing enquiries, and the government's thrust on infrastructure investments, will help firm-up volumes and realisations in the coming months."

Commenting on the performance, Veejay Ram Nakra, chief of sales and marketing, automotive division, Mahindra & Mahindra said, “The festive month of October 2019 was excellent for Mahindra, with retail volume exceeding wholesale by approximately 40 percent. This robust retail performance was contributed by both passenger and commercial vehicles. Further, our billing numbers are in line with what we had planned for the month, since the objective was to significantly correct our channel inventory. We hope to see the positive consumer sentiment continue going forward.”

While the festivities have managed to bring in some cheer to the OEMs as the market sentiments have seemed to improve. The country's PMI (purchasing managers index) data released for October 2019 declined to a 2-year low of 50.6 from 51.4 in September 2019. According to industry experts, this is the slowest pace of growth in production and new factory orders in the last 2 years along with moderation in sales weighed on manufacturing activity during the month. The real test for the auto industry would be to continue the sales momentum, before the BS-VI norms set in from April 2020, as the industry expects a drop in demand on the back of an increase in vehicle costs.