Surging demand for the Seltos, Creta and Nexon helps OEMs increase market share; Kia takes No. 3 position from M&M in a year fraught with many challenges. 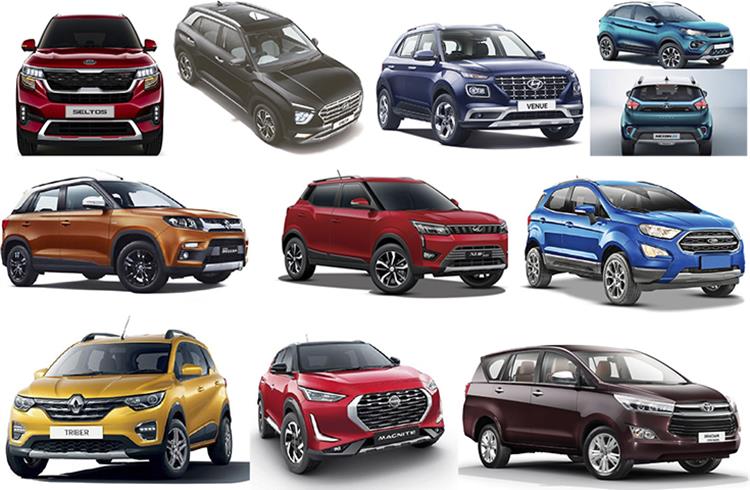 In the competitive marketplace that India is and especially in the booming utility vehicle space, they say it is the SUV-ival of the fittest. So, even as the UV vehicle market with 10,60,750 units (12.13%) was the star performer among all vehicle segments – driving past the million-sales landmark for the first time ever – and the sole one to enter positive sales territory, there is an intense battle underway among OEMs to grow market share. Some number-crunching reveals interesting insights.

Nonetheless, it is a very creditable performance from the company, considering that it moved out of the diesel market in April 2020 and has since focussed on selling only petrol- and CNG-powered vehicles.

Kia Motors India, which has been on a roll in the market, sold a total of 155,686 units in FY2021, notching handsome 83% YoY growth and substantially increasing its UV market share to 14.68% from 8.98% a year ago. The Seltos, Kia’s vehicle of entry into India, remains its best-seller with 89,173 units, followed by the Sonet with 63,717 units and the Carnival MPV with 2,796 units. Kia’s strong performance means it has unseated Mahindra & Mahindra from the No. 3 position, breasting ahead by a mere 156 units.

Toyota Kirloskar Motor, which had a decent outing with 66,268 units, saw its UV market share grow to 7.07% from 6.25% a year ago. The Innova Crysta MPV, with 37,934 units, was its best-seller followed by the Urban Cruiser with 16,316 units. The remaining 12,018 units were contributed by the Fortuner,Land Cruiser,Prado and Vellfire.

Meanwhile, Renault India, MG Motor India and Nissan Motor India are benefiting from their new products. Renault India, which sold 51,434 UVs, recorded 20% YoY growth in FY2021. Its growth has been powered by the Triber and more recently the Kiger compact SUV. MG Motor India, with 35,597 units, clocked 62% YoY growth (FY2020:  21,954). Leading the charge for MG Motor India is the Hector with 31,585 units, followed by the recently launched Gloster (2,513) and ZS EV (1,499). For Nissan, the recently launched Magnite is helping revive fortunes. The Japanese carmaker sold a total of 11,451 UVs in FY2021, improving its year-ago performance by 119% albeit on a low base.

Growth outlook
Expect FY2022 to be a year when there will be a glut of SUVs rolling into the market. Having an SUV or two in your PV arsenal is a must if an OEM has to succeed in India and that’s just what is happening. Demand for sub-four-metre compact SUVs seems insatiable and OEMs are going all out to introduce new products. The coming months will see a number of new models getting introduced including the likes of Mahindra’s new XUV700, Skoda’s Kushaq, Volkswagen’s Taigun and Hyundai's Alcazar.

Tata Motors is aggressively driving its growth plan and Korean carmakers Hyundai and Kia, who between them have 34.87% of the UV market, will be looking to further up the SUV ante. Any which way you see it, it’s an exciting time for the segment. Stay tuned.