As OEMs started revealing their sales numbers for January 2015, what’s becoming apparent is that market sentiment seems to be giving a fillip to sales. 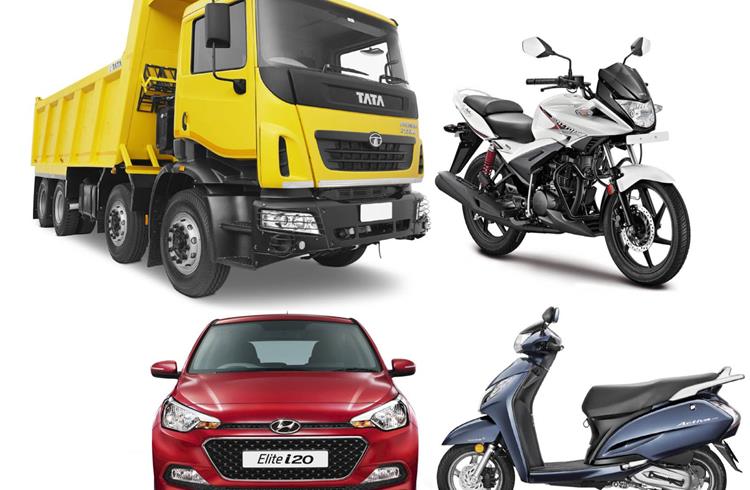 After the government decided not to continue the excise sops offered in the 2014 interim Budget, there were fears that sales in January would be lacklustre. However, going by the numbers that individual companies have put out, sales have not been too bad.

Maruti Suzuki India led the January tally with close to a 10 percent increase in sales. While Hyundai recorded a modest 4 percent, M&M saw a dip of 5 percent. Honda Cars India said it recorded its best ever sales in the fiscal, combining export numbers with domestic. The City and Amaze led the Honda charge while cars like the Elite and Grand helped Hyundai. For Maruti, the Ciaz totted up 6,005 units.

Clearly, the more recent models have done well for their manufacturers. With two more months for this fiscal year to come to a close,  all eyes are on the Union Budget to be unveiled four weeks from now. OEMs are hoping for lower interest rates and big-ticket reforms to boost sentiments.

Commenting on HMIL’s January 2015 sales, Rakesh Srivastava, senior vice-president (sales and marketing), said, “Hyundai Motor India sold 34,780 units in the domestic market with a growth of 7 percent over January 2014. This growth came in on the momentum built by products like the new Elite i20, Grand and Eon while facing the stiff challenges of increasing cost of ownership on account of an increase in excise duties. For sustained growth the need of the hour is reduction in interest rates and rationalisation of taxes to increase the inflow of the first-time buyers."

Mahindra & Mahindra (M&M) reported total domestic sales of 18,804 passenger vehicles in January 2015, down 5 percent (January 2014 : 19,792) year on year. Speaking on the monthly performance, Pravin Shah, chief executive, Automotive Division, M&M, said, “The first month of 2015 has not been encouraging as the effect of withdrawal of excise duty subsidy is clearly evident. Unfortunately, the segmented recovery which we were witnessing over the last couple of months has been impacted with the excise duty change. We do hope that the upcoming Union Budget has some positive news for the auto sector. At Mahindra we are happy with the performance of our exports as well as our Trucks & Bus Division.”

For the month, overall total domestic sales combining US and cars, commercial vehicles, three-wheelers and trucks and buses comprised 37045 units, down 8 percent year on year (January 2014 : 40,324. In January 2015, the truck and bus division company sold 796 units, registering a growth of 10 percent (January 2014: 722). Exports for the month stood at 2,885 units, registering a growth of 22 percent year on year.

Jnaneswar Sen, senior, VP, marketing & sales, Honda Cars India, said, “January 2015 has been an extremely good month for HCIL. We registered our highest monthly domestic sales of this fiscal contributed by strong sales momentum for all the models.”

Tata Motors’ passenger vehicles division recorded sales of 13,047 units, up 19 percent as compared to 10,974 units sold in January 2014. In a statement, the company said sales of the Zest sedan, launched in August 2014, has done well while the Bolt has received a good response. Sales of Tata passenger cars in January 2015 were at 11,637 units, higher by 38 percent over January 2014; UV sales however fell by 44 percent at 1,410 units in January 2015.  The company’s cumulative sales of all passenger vehicles in the domestic market for the fiscal thus far are 105,274 units, down 8 percent over the corresponding 10-month period the previous year.

Toyota Kirloskar Motor registered a 16 percent growth in the first month of the year. The company sold 12,650 units in the domestic market as compared to 10,910 units in January 2014. N Raja, director and senior VP (sales and marketing), said, “The growth of 16 percent is also credited to the launch of the new Innova and all-new Fortuner 4x4 AT, in early January.” However, he cautioned that “the effect of the increased prices on account of excise duty hike is still impacting the market. We hope the government will reconsider the excise duty concessions in the upcoming Union Budget to achieve sustained growth in 2015. In line with the Make in India campaign, structural reforms for the automotive sector are essential at this point in time.”

2-WHEELER KEEP UP THE SALES MOMENTUM
The two-wheeler segment continued to see monthly rise during the first month of 2015. While Bajaj Auto registered negative growth during the month, all other major players received a positive response from the domestic market.

BAL, which lost the number three rank to TVS Motor Company last year in terms of domestic two- wheeler sales, is planning to launch at least six new models (possibly including refreshes) in 2015 to boost its sliding sales.

Another company registering growth on the back of its scooter sales is Yamaha Motor India. The company has recorded sales of 39,309 units during the month as compared to 32,534 units sold during January 2014, witnessing an upward of jump 20.82 percent. Happy with his company’s monthly sales performance, Roy Kurian, vice-president – sales & marketing, Yamaha Motor India Sales, said, “The incessant growth reinforces our belief in our business and strategic outlook. We are happy with our gradual growth and are extremely positive about 2015 with our new launches and innovative customers connect programs. Leveraging on the same, we will garner major sales and will be able to post some record numbers in the coming months. Upbeat about the future, we are eager to replicate and improve upon our last year’s achievements in 2015 too.”

Meanwhile, Suzuki Motorcycle India (SMIL) has reported total sales of 33,405 units during the month as against 27,825 units sold during January 2014, marking a growth of 20.05 percent. Speaking on SMIL’s January 2015 growth, Atul Gupta, executive vice president, SMIL, said “Our concerted efforts to promote the Gixxer (bike) and Let’s (scooter) have met with positive customer sentiment. Customer satisfaction and word-of-mouth publicity are key factors that work to our advantage.”

The company is known to be working on expanding its pan-India network of sales and distribution on a priority to boost its reach.

CV MAKERS POSTS GAINS IN M&HCV SALES
The new year has begun on a bright note for the commercial vehicle sector. Sales in January 2015 have given manufacturers a cause for cheer with all OEMs recording positive sales in the medium and heavy commercial vehicles (M&HCV) segment. However, the LCV segment is still in the doldrums as Tata Motors and Mahindra Truck and Bus posted negative sales in the segment. Ashok Leyland, which posted a Rs 32 crore profit in Q3, recorded double-digit growth in the LCV segment.

The positive sales in the M&HCV segment have been attributed to fleet renewals by large fleet operators who are tapping business from increased freight activities.

VE Commercial Vehicles saw its sales rise 25 percent in the month. In the domestic market in the 5-tonne and above category, the company sold 2,905units (January 2014: 2,322 units). 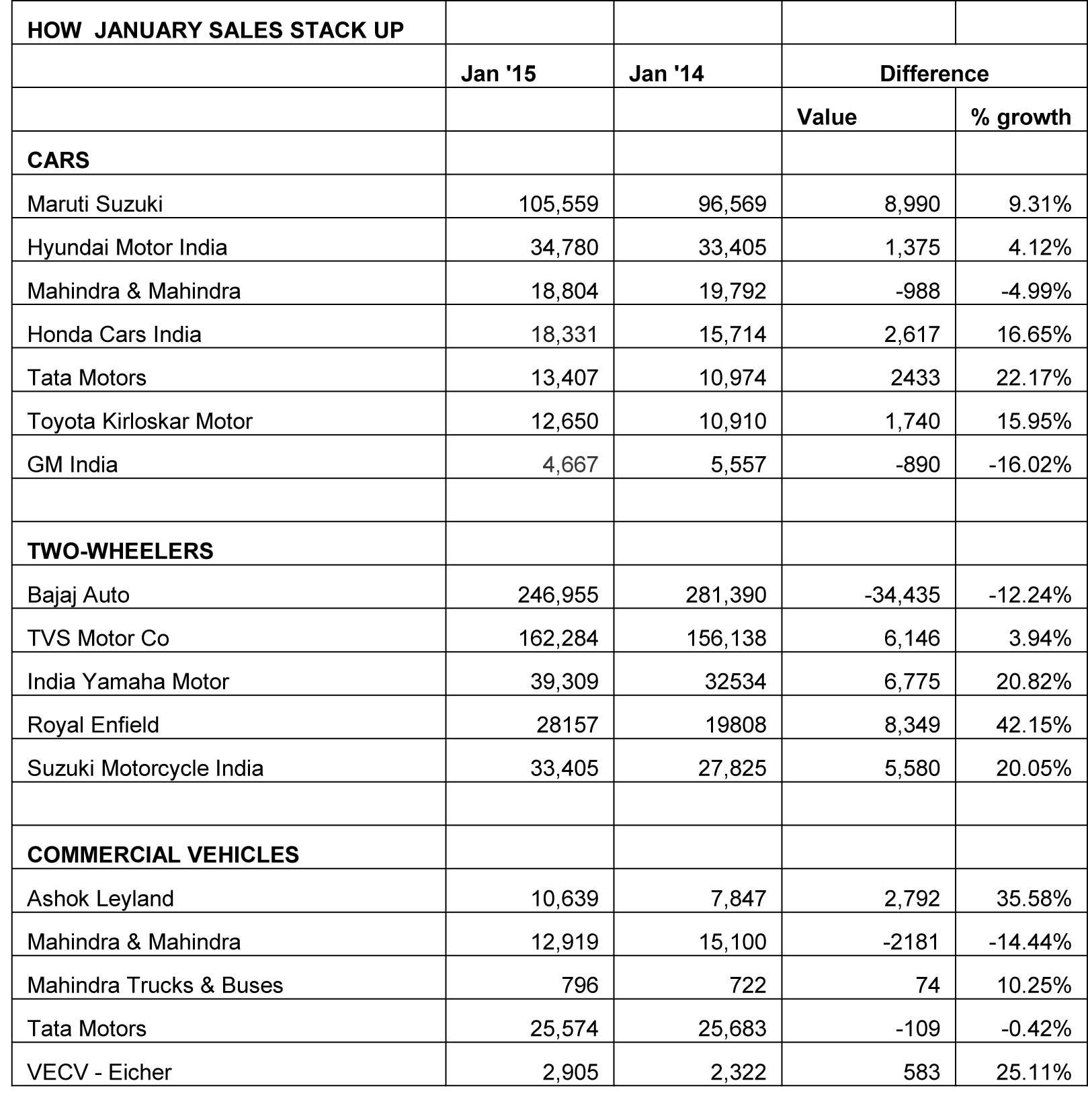