The no-holds-barred battle at the top continues between the Honda Activa and the Hero Splendor. It's also a battle between scooters and motorcycles, as young India looks to scooter more than bike around. 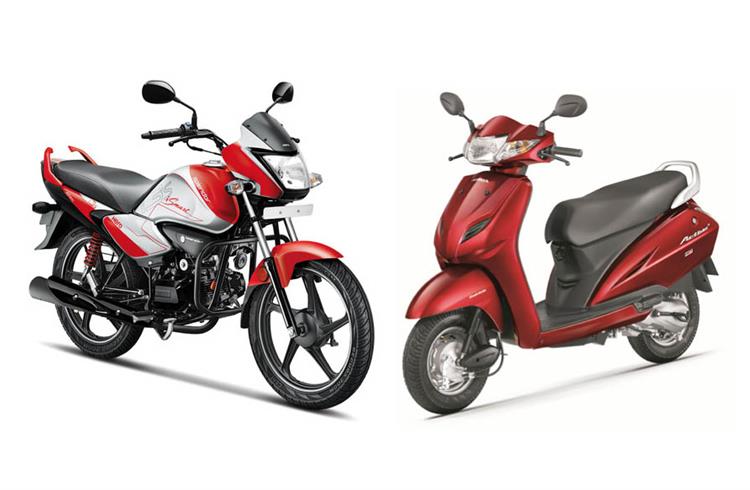 The Honda Activa, which has been India’s bestselling two-wheeler for eight months on the trot this fiscal, has outsold the Hero Splendor once again – but with a very slim margin of just 309 units. The popular scooter brand sold 226,046 units, up 25 percent YoY.

Honda’s 125cc bestseller CB Shine stood out as the fourth largest selling two-wheeler brand with sales of 82,247 units last month, up a staggering 81.82 percent YoY. The model’s arch-rival, Hero’s Glamour was fifth with sales of 73,226 units, a YoY growth of 37.38 percent YoY.

TVS Motor’s XL Super moped remains one of the most popular two-wheeler models in the country. It sold 69,888 units in November 2017, thereby registering a negative growth of 8.50 percent YoY.

TVS Jupiter, which is the only other scooter brand to break into the top 10 bestselling two-wheelers list, stood at the seventh spot with sales of 62,553 units, up 14.07 percent YoY. The Jupiter scooter has singlehandedly steered scooter sales for TVS Motor making the manufacturer the second largest company in the fast-surging segment.

Bajaj Auto’s commuter motorcycle brand, Platina is ninth with sales of 51,809 units last month. It reported YoY growth of 22.21 percent over the 42,395 units sold in November 2016.

The Classic 350 continues to be the top-selling model for Royal Enfield. It is the tenth largest selling two-wheeler model in India with sales of 49,534 units, thereby beating popular brands such as the Bajaj Pulsar, TVS Apache and others. The RE Classic 350, which had reported sales of 35,809 units in November last year, has reported an impressive growth of 38.33 percent YoY. The Redditch series introduced in the Classic 350 lineup is understood to have contributed well to its growing demand.

Total two-wheeler sales during the April-November 2017 period are 1,37,93,551 units, up a decent 9.61 percent YoY. With OEMs planning to roll out new models in the market, it would be interesting to keep an eye on the growing domestic demand for motorcycles and scooters.