Pre-GST jitters, which impacted PV sales in June, did not leave UVs untouched. But thanks to being the biggest beneficiary of GST, the SUV segment will soon be firing on all cylinders. 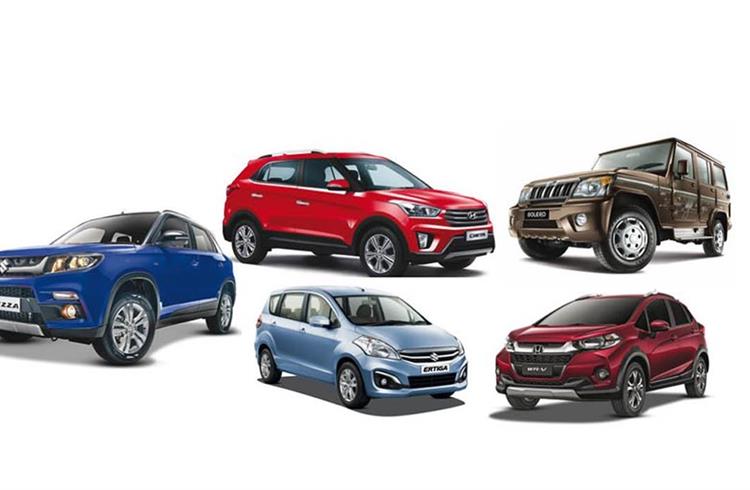 Utility Vehicles (UVs) are proving to be a lot more than just utility when it comes to the sales numbers at the end of a month. The world over and in India, the SUV segment is riding a massive wave of demand and shows no sign of slowing down whatsoever.

In India too, the segment has been charging along at a brisk pace, eating into the passenger car market and getting OEMs to think aggressively of getting ready a future-ready SUV factory. Even though the UV segment faced a decline of 11.25 percent in June 2017 to 49,547 units, cumulative numbers for the first quarter of FY2018 April-June 2017 period, at 190,098 units mark a year-on-year growth of 7.53 percent.

The Maruti Vitara Brezza, which has helped Maruti breeze ahead of Mahindra & Mahindra in the market share game, continues to maintain a strong sales momentum. At 8,293 units sold in June, the compact SUV saw demand even in a month hit by pre-GST jitters, maintaining its top-dog position and ahead of No, 2, Hyundai Creta by a fair margin. The Korean SUV though remains a high-seller for Hyundai and was bought by 6,436 owners last month.

Hardy workhorse that it is, the Mahindra Bolero has been a fixture in the Top 5 since long and in June sold a total of 5,320 units. With demand returning from rural India, expect this rugged machine to post improved numbers month on month.

At No. 4 is the Maruti Ertiga with 4,895 units. This MPV, whose popular SHVS hybrid version has been slapped with a high GST rate, is likely to see its numbers dip in the coming months.

Growth outlook: Bullish!
The upcoming three quarters will see the UV sector firing on all cylinders and how. Suffice it to say that this segment will be the powerhouse behind the charge of the overall PV segment. The biggest gainers in the GST regime are SUVs which see a sharp 12 percent reduction in tax from 55 percent to 43 percent. Accounting for a fourth of all PV sales in India and having notched near-30 percent YoY growth in FY2017 (761,997 units), FY2018 will most likely see a sharper acceleration in demand for SUVs. Autocar Professional hazards a guess that overall SUV numbers for FY2018 could even near or cross the million-unit mark.

With handsome price cuts and a flurry of new models slated for rollout over the fiscal, expect SUVs to grab an even larger share of the passenger car market.

Autocar Professional’s analysis reveals that over the past seven fiscal years, even as the overall PV market size has grown, the overall share of the passenger car market has fallen by 10 percent while that of UVs has risen by 12.5 percent, clearly indicating that SUVs have eaten into the car market and it’s a trend that’s set to continue. From a high of 79 percent market share (1,982,702 units) in 2010-11, the passenger car market has declined to 69 percent share (2,102,996) in 2016-17 even as the overall PV market has grown by 21 percent over a seven-year period.

For the SUV segment, of course, it’s been boom time particularly in 2016-17, where it recorded handsome 29.91 percent YoY growth coming on a back of plenty of new product launches, continuing demand for compact SUVs and a marked shift of customer preference for such models over conventional hatchbacks.

Sales data from the past seven fiscals indicates that from a 12.59 percent share of the PV market in 2010-11, SUVs now account for 25 percent. This confirms what the industry had known all along – that out of every four new vehicles sold in India, one is an SUV.

The trend looks set to get stronger what with most PV manufacturers hard at work on developing new SUVs for the Indian market. Now, with GST rates adding wind to their sail, the SUV sales juggernaut can only get bigger. Watch this space.