In January, 553,695 scooters were sold in India, marking handsome YoY growth of 48.29 percent. This also constitutes 33 percent of the total two-wheelers sold, which means one of every three two-wheelers sold is a scooter. 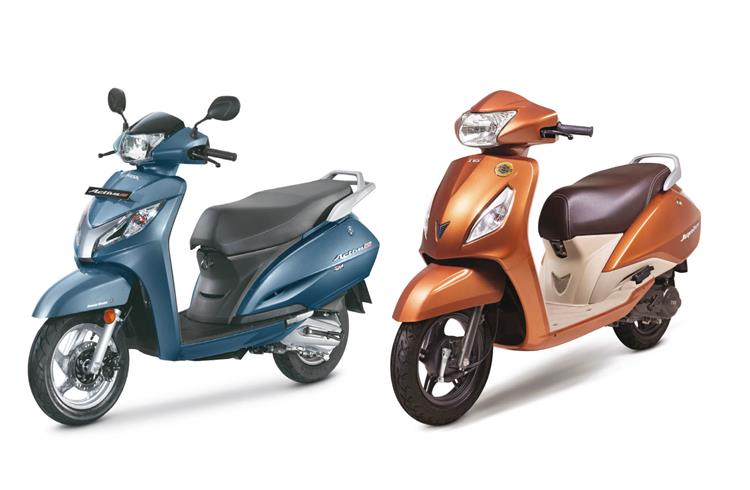 Scooterisation has taken firm grip in India and the segment is firing on all cylinders. In January, 553,695 scooters were bought across the country, marking handsome year-on-year growth of 48.29 percent. This number also constitutes 33 percent of the total two-wheelers sold last month, which means one of every three two-wheelers sold is a scooter. And the pace of growth is only growing.

Making the most of this surging demand is Honda Motorcycle & Scooter India (HMSI)’s Activa family, which remains the undisputable king of the scooter segment. Now the company has further strengthened the Activa range with a host of aesthetic and feature upgrades on the Activa 5G, introduced at the Auto Expo 2018.

HMSI maintains its leading position at the helm of the scooter market, with three of its models contributing to over 55 percent of the total scooter sales in the month. The Activa range continues to bring in huge volumes with total sales of 243,826 units, growing 23.77 percent (January 2017: 196,996). Expect the Activa 5G to provide more sales acceleration. The Activa 5G gets LED DRLs upfront, along with a new digital-analogue speedometer along with a new colour palette to give a rejuvenated look to the segment best seller.

At No 2 is the TVS Jupiter, which sold 64,990 units, posting notable growth of 25.29 percent (January 2017: 51,868). While the Jupiter makes for a strong case for itself in the 110cc segment, TVS Motor has gone a step ahead and with intent to target the blossoming 125cc scooter segment, the company has introduced the completely new TVS NTorq 125, which has been priced rather aggressively at Rs 58,750 ex-showroom, Delhi. The modern-looking scooter seems to have the potential to stir things up in the evolving 125cc scooter segment. Between April-January 2018, the company has cumulatively sold 909,746 units and has seen its market share increase from 14.52 percent to 16.13 percent in the scooter segment.

According to Aniruddha Haldar, VP - marketing (scooters, commuter motorcycles, corporate brand) TVS Motor, “Scooters are growing rapidly and their share in the overall two-wheeler space is set to grow in the future, wherein a 40 percent hold is a very clear visibility within the next three years. I don’t think there are any hurdles there. Beyond that, I don’t see a reason why intrinsically the market movement should alter. "Also because of the shift that is happening towards scooters, there is also a large number of young motorcycle buyers who are increasingly giving a second thought to scooters, before going ahead and making their motorcycle purchase.

Suzuki’s Access 125cc is the fifth largest seller with sales of 37,783 units, growing by 40.54 percent, which is a significant number for the model, which has created its image of being one of the most reliable and trusted products in the market.

Launched in November 2017, the Honda Grazia, another 125cc offering from HMSI, has not taken much time to make its way into the Top 10 list, with the scooter being positioned as a premium, feature-rich product, and liked by many for its overall styling and comfort. The Grazia sold 22,656 units in January to rank No 6 and has cumulatively sold over 50,000 units since launch.

Another Japanese manufacturer in the competition, India Yamaha Motor saw its Fascino at the No 9 spot, selling 14,123 units and the Yamaha Ray going home to 12,918 buyers, having good affinity with college goers.

During the 10-month period between April-January 2018, scooters sold a total of 5,641,243 units, growing 20.91 percent. In January, scooters contributed 32.87 percent to the overall two-wheeler sales in the country, which stood at 1,684,066 units and given the trend, their share is only expected to grow in the times to come.