While the Honda Activa and TVS Jupiter have sealed the top two spots for some time now, the no-holds-barred battle between the Maestro and Dio is making news. 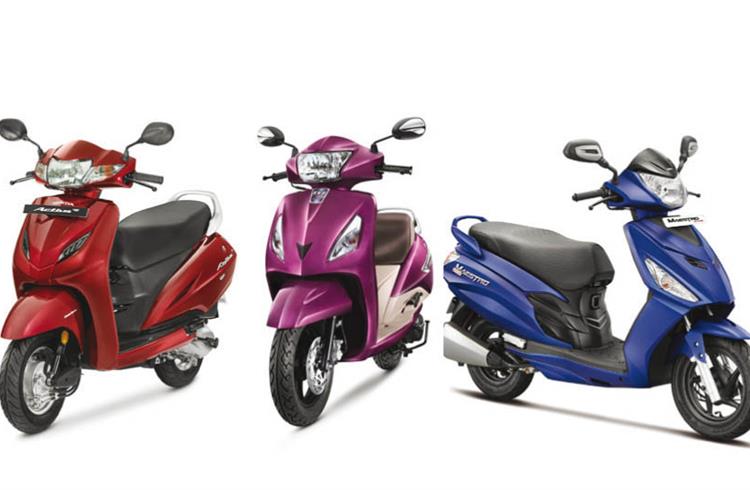 The scooter market in India is where the most excitement is on two wheels. Once a urban phenomenon, the wave of scooterisation is fast spreading across town and country, reason enough for two-wheeler OEMs to shift gear in this segment.

While the Honda Activa family of scooters reigns supreme, the other products in the fray are not in passive mode. TVS Motor Co, with its Jupiter, has been notching new highs for sometime now, albeit it is way behind the leader to be a threat of any sort.

When it comes to the monthly Top 10 list, barring one or two models, the best-sellers ranking has largely remained the same. The models, however, fiercely compete with each other for better ranks each month. For example, while there’s a fierce fight underway between the Hero Maestro and Honda Dio for the third position each month.

The Honda Dio outsold the Hero Maestro in May 2017 to become the third bestselling scooter in the domestic market. Nevertheless, the Dio was beaten by the Maestro in June and July.

Similar rivalry can be seen between Yamaha’s Fascino and Hero’s Duet and Yamaha’s Ray and Hero’s Pleasure models each month.

Honda has recently rolled out its most affordable scooter – the 110cc Cliq. The model is currently available for retail only in Rajasthan and Maharashtra states. Yet it managed to record sales of more than 4,000 units in July alone. With Honda’s plans of rolling out the Cliq scooter in Tamil Nadu and Karnataka soon, the Cliq is expected to make an entry in the Top 10 list in the coming months.

More new scooter launches are expected later this financial year. While the new launches will primarily consolidate a currently under-represented category in the scooter market, the new models will surely impact the current composition of the top 10 bestselling scooters.

Scooting for top ranking
For July 2017, at the top is the Honda Activa, which sold 292,669 units (up 14.24 percent YoY). The TVS Jupiter reported sales of 62,707 units (up 34.69 percent YoY ) last month to maintain the second spot. Their positions remain unchanged from a year ago (see sales table below).

Yamaha’s fashionable scooter, Fascino has reportedly sold 16,000 units in July to grab the sixth slot. The model, however, has declined by 11.90 percent YoY. Industry experts say that although Fascino is a good and appealing product by Yamaha, it is limited by its retail availability across the country.

The Hero Duet is the seventh bestselling scooter with sales of 14,418 units in July. The scooter recorded a YoY decline of 40.89 percent. Notably, unlike in July, the Hero Duet had outsold the Yamaha Fascino in May and in June.

The Hero Pleasure, which is targeted at urban female commuters and is also the most affordable scooter from Hero MotoCorp’s portfolio, ranked tenth in July with sales of 12,758 units.

However, senior officials from Hero MotoCorp forecast that the scooter segment might not grow as rapidly as it has been growing in the future. They anticipate that the overall share of the scooter category in the total two-wheeler market will stabilise at close to 40 percent in the foreseeable future.