Maruti Suzuki India continues to make the most of improved market sentiment and currently commands 50.14 percent of the passenger vehicle market. Six of its models were in the Top 10 bestsellers list last month. 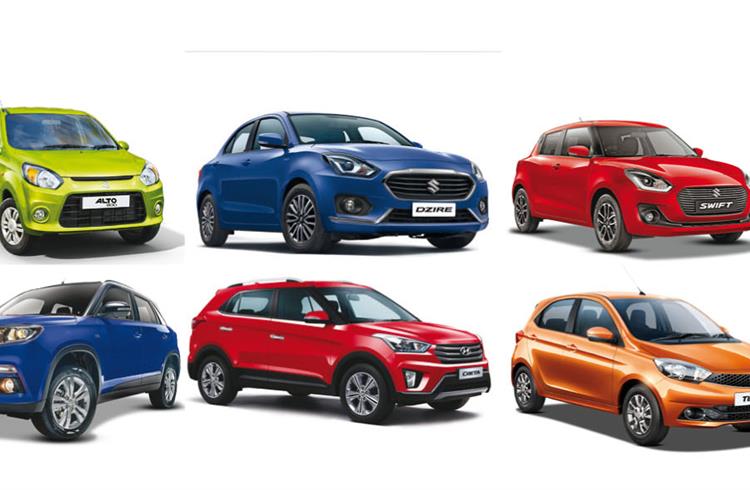 Calendar year 2018 has kick-started on a positive note for the Indian automotive industry, with all key vehicle segments marching ahead with good growth. Total passenger vehicle sales stood at 285,477 units, registering a growth of 7.57 percent, up from 265,389 units sold in January 2017.

The industry could be seen to be going strong with the continued momentum from the second half of CY2017, with factors such as implementation of the GST pushing market demand. While the country’s leading carmaker, Maruti Suzuki India, sold 139,189 (+4.05%) units in January, the company sold 1,195,347 units between April-January 2018 and increased its market share by 2.5 percent to hold a considerable 50.14 percent of the PV market during the period.

Six models from Maruti’s stable continued to dominate the Top 10 bestsellers in the month of January. The entry-level hatchback, the Maruti Alto, sold 19,134 units but saw de-growth of 16.80 percent (January 2017: 22,998). The other five Marutis in the Top 10 list are the Dzire, Baleno, Swift, Wagon R and the Vitara Brezza. These six models together account for a total of 95,369 units or 70.54 percent of the carmaker’s total PV sales in the month.

The Maruti Dzire compact sedan maintains its charm in the market, with the new third-generation model selling 18,053 units last month, compared to the previous generation of the car which sold 18,088 units in January 2017. Where the older car won on practicality, the new model has impressed buyers in the segment with its new styling, contemporary features, efficient engines, and the option of manual as well as automated manual transmissions.

At No. 3 is the Maruti Baleno, which went home to 17,770 buyers, a notable 70 percent year-on-year growth (January 2017: 10,476) and also jumping five places from No 8 last year. The premium hatchback offers a host of features like projector headlamps, touch-screen infotainment system, as well as the option of a sportier 1.0-litre turbocharged petrol motor in its RS avatar.

The outgoing second-generation Maruti Swift took the fourth spot, maintaining flat sales at 14,445 units, (January 2017: 14,545). Maruti has now launched the third-generation Swift at the recently concluded Auto Expo, which is a massive upgrade to the outgoing model. With its contemporary styling, better level of kit, and the option of AMT across petrol and diesel variants, the new Swift holds huge potential to bring a strong boost to the car’s demand.

Maruti’s compact UV offering, the Maruti Vitara Brezza comes in at the No 7 spot, closing the month with sales of 11,785 units, a significant 32 percent growth from the 8,932 units sold in January 2017.  The compact SUV has been driving the sales for the company, standing unfazed by the growing competition from the likes of the Ford EcoSport (January 2018: 6,833) and the Tata Nexon (January 2018: 5,421), which pitched directly against the Brezza with their high-value prepositions.

At No. 8 is Hyundai’s Elite i20 premium hatchback, which went home to 9,650 buyers, declining 15.79 percent (January 2017: 11,460). Hyundai introduced the facelift of the car at the 2018 Auto Expo and the updated version now gets some aesthetic tweaks on the outside with a new front grille and rear tail-lamps. The major change, however, is the introduction of a completely new CVT option, coupled with a 1.2-litre petrol motor in its automatic avatar. The car now also gets dual-tone paint choices.

The sweet surprise to the Top 10 list is the coming in of the Tata Tiago, which has been a game- changing product for the home-grown carmaker, and sold 8,287 units in January. With its launch in 2011, the car has played a huge role in bringing Tata Motors to the forefront in the recent past and is a key driver to start its journey of being the No 3 carmaker in India by 2020. Tata Motors sold a total of 167,208 units between April-January 2018 and the company has seen its market share grow from 5.64 percent to 6.17 percent year-on-year.

Of all the PV OEMs in India, only five managed to increase their market share in the April 2017-January 2018 period. Maruti Suzuki India, of course, raised the bar even further, increasing its command over the market to 50.14 percent from 47.63 percent a year ago. Honda Cars India, as a result of strong demand for the City and WR-V, has seen its share growing to 5.34 percent from 4.95 percent, and Tata Motors from 5.64 percent to 6.17 percent. FCA India, with its Jeep Compass, opens its PV market share account this fiscal and currently has 0.56 percent to its credit. Skoda Auto India is the other player, whose share has risen, from 0.43 percent to 0.54 percent.

With a host of new unveils and launches at the 2018 Auto Expo, the Indian passenger vehicle segment is set to witness even more exciting performance in the days to come, with most car manufacturers looking to tap into the overall positive sentiment in the market. Stay tuned for more updates.