Hero MotoCorp and Bajaj Auto hold four slots each in the top 10 best-selling motorcycles in June 2016 leaving Honda and Royal Enfield with one position each for their respective bestsellers. 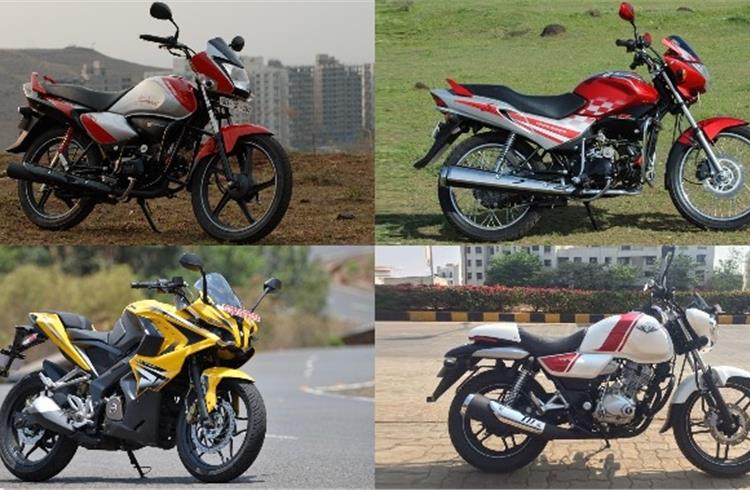 The top 10 best-selling motorcycles for June 2016 is yet another interesting story with Hero MotoCorp and Bajaj Auto holding four ranks each barely leaving any position for their rivals.

At number two is Hero’s best-seller HF Deluxe mass commuter, which is the only other motorcycle that sells more than one lakh units per month besides the Splendor series. The HF Deluxe sold 106,486 units, growing by 25.30 percent YoY. The company had recorded sales of 84,987 units of this model in June last year.

Interestingly in June 2016, Hero’s 125cc bestseller Glamour outsold its Passion series in possibly a first-ever sales comparison between the two hugely popular brands. While the Glamour sold 80,348 units and ranked third in the list, the Passion garnered sales of 76,639 units last month. Hero Passion, which has been witnessing a decline in its monthly sales, still stood as the fourth best-selling motorcycle brand in June 2016.

In a YoY comparison, Hero’s Passion has lost 47,824 units of sales in June 2016 as against its performance in June last year. The company had sold 1,24,463 units under its Passion brand then. It can be seen that this visible loss in sales volume is largely covered by the growth in the sales of HF Deluxe and Glamour models.

Making a dent at the fifth position is Honda’s 125cc best-selling motorcycle, CB Shine. It sold a respectable 74,286 units last month. The model had recorded sales of 65,350 units in June last year. The company management aims to boost the production capacity of the CB Shine range in order to address the demand. It is understood that Honda has been struggling with production capacity constraints across its four plants to make way for the high-demand models. 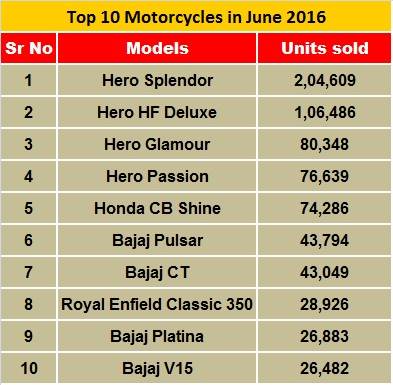 Bajaj Auto’s Pulsar range stood at the sixth slot with total sales of 43,794 units in June 2016. The company is understood to be gearing up for launching the biggest Pulsar yet, CS 400, within next three months. The Pulsar CS 400 is expected to be powered by the KTM-derived single-cylinder, 375cc engine outputting peak power in the range of 40bhp.

Making a comeback at the ninth position is Bajaj Auto’s commuter, Platina, which sold 26,883 units last month. The stylish Bajaj V15 ranked the tenth most popular motorcycle model with sales of 26,482 units.

The industry expects that the monthly sales will further rise in the coming months on the back of improving market sentiments, thanks to healthy monsoons.