India car sales rise in November, 2-wheelers shine even as M&HCVs point to a recovery 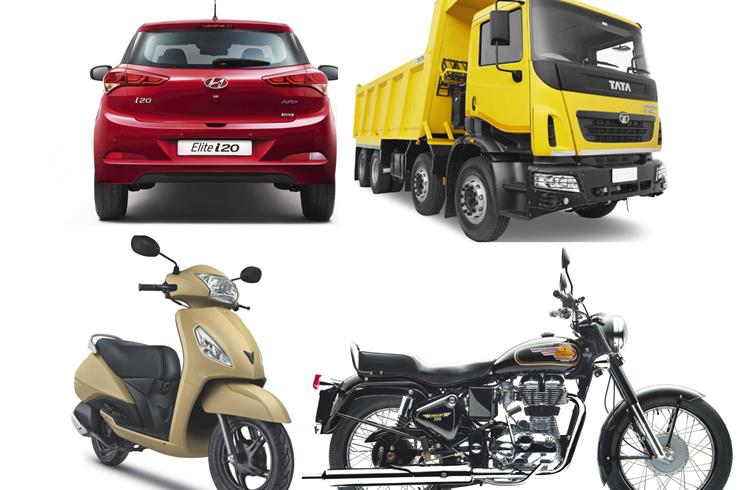 As vehicle manufacturers across segments revealed their November 2014 sales numbers, there seems to be an uptick across the key passenger car and medium and heavy commercial vehicle (M&HCV) segments.

Thanks to a number of new car launches in recent months and a softening of both petrol and diesel prices, consumers are returning to showrooms, which should come as a relief to carmakers who recorded a not-so-good festive season. November 2014 sales numbers indicate that car sales are up after three months, putting the slump behind them. However, the final overall sales numbers will be revealed when SIAM puts out its data a week from now.

While Maruti Suzuki India, Honda Cars India and Toyota Kirloskar Motor and even Tata Motors pulled in double-digit gains year on year, others like Mahindra & Mahindra, Ford India and GM India continue to feel the pressure of high interest rates, uncertainty of excise duty rates and a somewhat tight-fisted economy.

Hyundai Motor India recorded domestic sales of 35,511 units and exports of 18,500 units with cumulative sales of 54,011 units for November 2014. Last November, the company sold 33,510 units in the domestic market, so this month’s sales are an increase of six percent. Sales in the local market were powered by the Elite i20 hatchback which sold 10,500 units, accounting for just under a third of the company’s sales. November sales were HMIL’s highest for the new model so far.

Rakesh Srivastava, senior VP (sales and marketing), HMIL, said: ”The strong investment of launching four new products in a years’ time has resulted in this growth. Today, Hyundai has one of the youngest product portfolios lead by the Elite i20.”

The Elite i20’s total sales have crossed the 35,000 mark since its July launch. The vehicle has replaced the earlier i20.

Commenting on the sales, Pravin Shah, chief executive, Automotive Division & International Operations (AFS), said: “The auto industry continues to its sluggish demand due to factors such as low consumer sentiments and high interest rates. The reducing international crude prices and the subsequent lowering of fuel prices should help in revival of demand in the coming months. We also hope that the current excise duty rates will be extended beyond end of December to get much-needed recovery for the auto industry.”

The City top-scored with sales of 7,252 units, followed by the Mobilio and Amaze that sold 3,589 and 3,310 units respectively. With the company beginning a second shift at its Tapukara, Rajasthan unit, the company was able to ramp up sales of the City, which have crossed the 70,000 mark since its launch at the beginning of the year. Sales for the Brio hatchback touched 1,050 units and that of the CR-V, 62.

Jnaneswar Sen, senior VP, marketing & sales, said, “We continue to have strong demand for all our products across markets. We are aggressively expanding our dealer network which has reached the milestone of 200 dealers in the country.”

HCIL’s sales for the eight-month period ended November 2014 were up 46 percent with 116,705 units sold as against 80,163 units during the corresponding period last year. HCIL exported 890 units during the month.

Toyota Kirloskar Motor sold 12,175 units in November 2014 in the domestic market, up 19 percent (November 2013: 10,208). On the export front, it shipped 1,959 units of the Etios series last month. So cumulatively, the company recorded sales of 14,134 units, including exports, in November 2014 as compared to 12,748 units in the year-earlier period. TKM registered an overall growth of 11 percent. The company has recently launched a refreshed Etios range.

N Raja, director and senior vice-president, sales and marketing said, “We have registered growth in domestic and overall sales. We hope to maintain this momentum with the year ending, this month.”

“The perceived improvement in consumer sentiment is yet to translate into better sales for the automotive industry. A lacklustre festive season was certainly not what the industry expected. While we are confident of the long-term growth potential of the Indian market, we continue to be cautiously optimistic in the near-term,” said Anurag Mehrotra, executive director, marketing, sales and service at Ford India.

On the sales front, the company has inaugurated five new touch-points in Chandigarh and Punjab in the past month. The recently inaugurated touch points include the first Ford Quick Lane in Chandigarh among other sales, service and spares outlets.

TWO-WHEELER SALES KEEP UP THE SALES ACT
Two-wheeler sales, as usual, were in a buoyant mood. The segment, which has been the bulwark of the Indian automobile sector, since the past two years has shown good momentum.

Hero MotoCorp, which is aggressively expanding its footprint overseas as well as growing its rural reach in India, sold a total of 547,413 two-wheelers (November 2013: 530,530).

Yamaha Motor India Sales recorded a 12 percent increase in domestic sales in November 2014 as compared to the corresponding period last year. The company has also launched its Yamaha SZ RR Version 2.0. In terms of numbers, the company sold 44,678 units in November 2014 (November 2013: 39,777) in the domestic market. Roy Kurian, VP (sales & marketing) said: “We are pleased with the sales growth that we’ve witnessed in the past month on account of our strong product portfolio; upbeat customer confidence, the launch of the SZ RR Version 2.0 and strategic customer connect initiatives, which have invariably managed to keep the growth consistent.”

The SZ RR Version 2.0 is an upgraded version of the SZ-RR bike launched last year. The bike features a new engine that the company claims offers 11 percent more fuel improvement as against the earlier model.

Royal Enfield is on a roll and many of its models are facing a demand-supply mismatch, thanks to substantial waiting periods for some popular models. The iconic manufacturer sold a total of 27,198 units last month, recording a 53 percent growth (November 2013: 17,752). On the export front, it sold 344 units, down 9 percent over the 379 units sold a year ago. In the April-November 2014 period, the company has sold a total of 268,191 bikes, up a handsome 73 percent over the 154,797 units sold in April-November 2013.

Mahindra Two Wheelers (MTWL) has reported its November 2014 sales of 13,052 units, down 45 percent over sales a year ago (November 2013: 23,831). “We are delighted by the enthusiastic response to our new global scooter, the Gusto across North India and expect it to increase as we ramp up production and roll it out across other parts of India and abroad,” said Viren Popli, the company’s chief of operations.

Marking a flat growth of two percent, Suzuki Motorcycle India (SMIL) sold 33,400 units in November 2014 (November 2013: 32,799). Atul Gupta, executive vice-president, SMIL, said, “Our efforts to promote the Gixxer and Let’s have met with positive customer sentiment. Growth in sales indicates that the market responds favourably to our products and we hope this is part of a continuing trend.” The Let’s scooter and 154.9cc Gixxer motorcycle are the last two products rolled out by the company, which is now consolidating its dealer presence to reach new markets.

M&HCV SALES SHOW SIGNS OF RECOVERY
The past three months have seen a momentum of enhanced sales in medium and heavy commercial vehicles (M&HCVs) even though the overall CV sector sales have been negative.

Among macro-economic factors, the falling crude oil prices have come as a boon to the CV sector. Passing on the benefits of the falling international oil prices to the consumer, the government has announced another cut in diesel prices. Oil marketing companies have reduced the retail price of diesel by Rs 0.84 per litre on November 1.

According to IFTRT, truck rentals on key routes which were stable last month have fallen 4-5 percent in November largely due to cargo dispatches which have fallen in the post-festival season. In another positive sign, IFTRT says truckers have cleared their loan obligations for vehicle purchased in 2010-11 and are now in a position to renew and expand their fleet.

In terms of company-specific sales, Tata Motors’ overall domestic sales have recovered marginally as the decline has come down to single digits largely due to the continuing slide of the LCV segment. The company sold 25,406 units in the month. (November 2013: 26,816). The M&HCV segment recorded a 39 percent growth. The company sold 9,452 units as compared to 6,823. Tata’s LCV numbers fell 20 percent to 15,954 units as against 19,993 units in November 2013.

VE Commercial Vehicles posted significant double-digit growth of 15.8 percent in November 2014 after October’s negative sales. In the domestic market, in the five tonnes and above category, it sold 2,233 units (November 2014: 1,928).

Mahindra Trucks and Busesrecorded a strong 31 percent increase in November sales with 582 units sold (November 2013: 443), albeit on a low base. 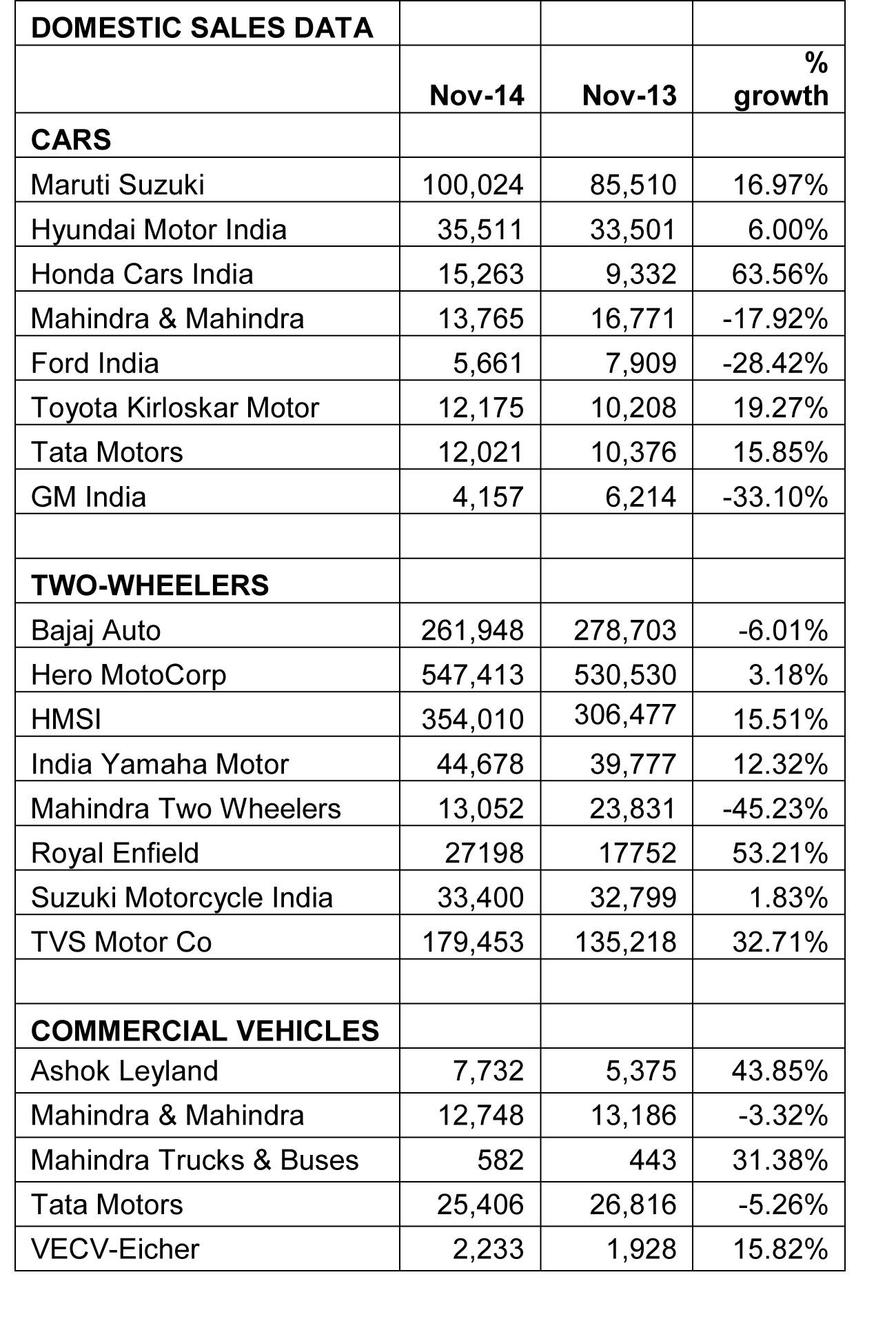