While passenger car sales are shifting to the growth lane, two-wheelers are already there (albeit motorcycles are slowing down) and commercial vehicle numbers are showing promise of a better tomorrow. 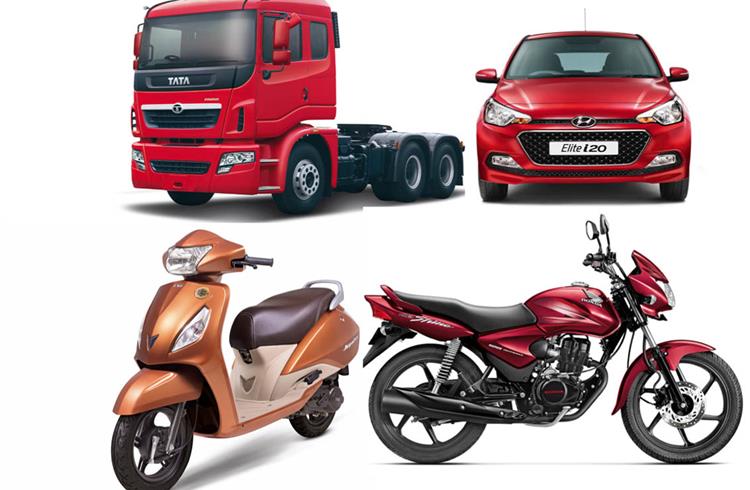 With the closure of the 2014-15 fiscal year, most automakers have revealed their sales numbers and the verdict is out: positive movement. While passenger car sales are shifting to the growth lane, two-wheelers are already there (albeit motorcycles are slowing down) and commercial vehicle numbers are showing promise of a better tomorrow.

Maruti Suzuki India’s sales juggernaut continues unabated. Its March 2015 sales growth was small but over the fiscal, the market leader made handsome gains. In March, its sales rose by 1.4 percent to 103,719 units (March 2014: 102,269).  The carmaker’s bread-and-butter segments recorded tepid growth rates. In the mini segment, sales of the Alto and Wagon R combined rose to 40,159 units from 40,085 units in the year-earlier month, up 0.2 percent. In the compact segment comprising the Swift, Dzire, Celerio and Ritz, sales were down 12.5 percent to 38,710 units from 44,251 units in the year-earlier month. The Ciaz sold 4,251 units in March 2015, taking the sedan’s total sales to about 32,000 units since its launch last October.

In the UV segment, the Omni and Eeco sold 11,768 units cumulatively, 20 percent up from 9,752 units in March 2014. Sales of the Gypsy and Ertiga together were 6,216 units, down 4 percent from 6,499 units in the year-earlier period. The Gypsy has benefitted from orders from the Indian army, selling on average about 450-500 units a month.

Commenting on the March numbers, Rakesh Srivastava, senior VP (Sales and Marketing), HMIL, said: “In a market with weak sentiments, Hyundai achieved its highest-ever single month sales of 39,525 units with highest-ever financial year sales of 420,668 units. The market share of 16.3 percent is the highest ever with a strong performance from new models like the Elite, i20 Active, Xcent and Verna and led by strong marketing initiatives to engage rural markets and repeat buyers.”

“The 2015 outlook seems challenging as currently there is low traction in the market with weak delivery on macro-economic parameters and on low customer sentiment. We are hopeful that an environment will be created to bring-in investment and create employment that will give the required thrust to grow the industry.”

M&M though is hopeful of a better performance in 2015-16. Pravin Shah, chief executive, Automotive Division, M&M, said, “With factors such as expectation of normal monsoon, settling down of petrol and diesel prices and the likely softening of interest rates, we expect the auto industry to perform better in FY2016.”

Commenting on the company’s sales performance, Jnaneswar Sen, senior vice-president (Marketing & Sales) said, “2014-2015 has been extremely fruitful for Honda. We are thankful to our customers for the great response we have achieved for the Mobilio. The new Honda City has achieved exceptional success. We are excited about the upcoming launch of the Jazz in the new fiscal and look forward to another year of good growth.” During 2014-15, HCIL expanded its dealer network in both existing markets and Tier III cities. The company now has 232 facilities in 152 cities across the country.

In a statement, the company said that despite the marginal reductions in repo rates earlier this year, the green shoots are still not visible in the economy as ‘we haven’t really seen the banks passing on the reductions entirely to consumers’.

“This, coupled with the economic slowdown, continues to hold the industry performance in the red and a possible turnaround is still not expected in the coming months,” said P Balendran, vice-president, GM India. “We hope that interest rates are reduced in phases going forward and the government takes some decisive steps to improve the consumer sentiment so that there is some uptick seen towards the festive season,” he added.

The Chevrolet Beat is GM India’s highest selling model with sales averaging about 1,000 units a month.

Ford India sold 5,253 cars in March 2015, down 17 percent (March 2014: 6,356). Its 2014-15 cumulative numbers were 75,138 units, down 11 percent YoY. “With the economic recovery being slower than anticipated and a high interest rate and inflation environment, customers continue to defer their discretionary spends,” said Anurag Mehrotra, executive director (Marketing, Sales and Service), Ford India. “However, Ford’s faith in India’s long-term growth prospects remains intact. We are continuing to invest in India’s future growth potential. In March, we took our growth commitment in India to a new peak with the inauguration of US $1-billion integrated manufacturing facility at Sanand, Gujarat,” he added.

Nissan Motor India sold a total of 47,474 units in FY2014-15, registering growth of 24.21 percent (2013-14: 38,220). In March, it sold 4,717 units, down 33 percent (March 2014: 7,082). According to Guillaume Sicard, president – Nissan India Operations, “We are pleased with the progress we demonstrated in our tenth year in India. FY2014 has been a significant year when we reestablished our India business with an independent sales and marketing organization. The growth we achieved was supported by the launch of two new models and fast growing network. As we set ourselves a target of 5 percent market share by FY20, we are focused on sustaining and accelerating our performance.”

Volkswagen India reported sales of 4,577 units in March 2015, up 22 percent (March 2014: 3,741). However, in the fiscal year, its sales dropped 14 percent to 45,018 units (2013-14: 52,528). The company says the Polo, which comes fitted with dual front airbags on all variants and is one of the safest hatchbacks in the India, made a significant contribution to March sales along with the new Jetta and Limited Edition Vento Magnific.

Michael Mayer, director, Volkswagen Passenger Cars, Volkswagen Group Sales India, said: “We are happy to note the significant hike in sales in March 2015. The increase in sales underlines the fact that car buyers in India are increasingly appreciative of the key attributes of our cars, which are best-in-class safety, build quality and driving dynamics, which makes our cars very involving to drive.”

TWO-WHEELER SALES MOVE UP FOR BIGGIES

Marking its highest ever annual sales for any fiscal year, in FY2014-15 the company recorded total sales of 66,31,826 units, a growth of 6.17 percent  (FY2013-14: 62,45,960). March 2015 also saw Hero MotoCorp inaugurate its first autonomous production and development centre at Manesar in Haryana) under its JV with Magneti Marelli of Italy. The new facility, which will serve as a production and innovation hub for developing new-generation fuelling systems for two- wheelers, has made Hero the first 2W OEM to have its own production line for electronic fuel injection (EFI) systems.

Commenting on the 2014-15 sales, Pawan Munjal, vice- chairman, MD and CEO, HMCL, said: “FY2015 was a year of milestones for us in terms of sales, expansion of our global footprint, product innovation and customer engagement. Our record sales performance is reflective of all these efforts. In FY2015, the industry continued to be sluggish due to the overall market sentiment and the slowing rural economy. Despite such a challenging market environment, we managed to buck the trend and registered healthy growth, further consolidating our leadership. The journey from here promises to get better and exciting. Thanks to a series of measures undertaken by the new government at the Centre, the economic outlook is definitely better, and it is likely to fuel growth and help the industry.”

Commercial vehicle sales for March 2015 remained a mixed bag for most manufacturers. While LCV sales continue to be in the slow lane, the gradually improving sales of medium and heavy commercial vehicles (M&HCVs) indicate that the new fiscal year should bring new gains for OEMs. With mining activities resuming in certain parts of the country and a larger push for infrastructure spending by the government, the CV sector should benefit in 2015-16.