A revival in the monsoon coupled with a slew of fresh launches and a decline in fuel prices has augured well for the Indian passenger vehicle industry as domestic sales rose in July. 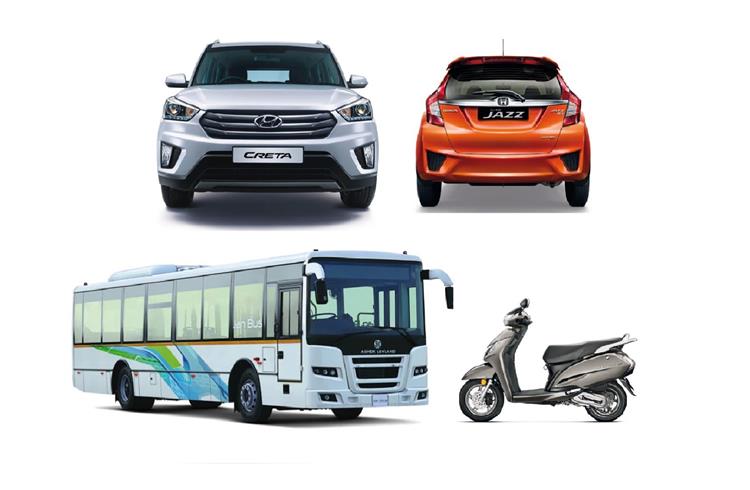 July 2015 sales would be good news for passenger carmakers in India, particularly the ones who have either launched or about to launch new models. The sales numbers point to sustained growth through the year. A revival in the monsoon coupled with a slew of fresh launches and a decline in fuel prices has augured well for the Indian passenger vehicle industry as the total domestic sales rose in July.

As per industry sales numbers revealed by the SIAM, passenger vehicle sales rose a healthy 11.43 percent to 222,368 units in July from 199,562 units in the corresponding period last year.

Utility vehicles, however, continue to plod –  45,191 units are a flat 0.37 percent year-on-year growth, indicative of the slowdown in the rural markets.

M&HCV sales in India stuck to the growth path, carrying forward the momentum of the past 11 months, the medium and heavy commercial vehicle (M&HCV) segment registered 29.49 percent growth during the month to 23,061 units. However, small and light commercial vehicle sales continued to struggle owing to the falling need for last-mile connectivity and lack of easily available finance. LCV sales fell 4.11 percent during the month 28,734 units. As a result, overall CV sales grew by only 8.41 percent during the month to 51,795 units.

With car sales continuing to drive growth and prospects of a pick- up in economic activity in the second half of the year, the Indian automotive industry is set to witness bouts of good growth in the coming months. A sound monsoon also provides hope of a growth in rural incomes and segments that are struggling right now could recover as well. According to Vishnu Mathur, director general of SIAM, a good monsoon is an enabler of growth which is likely to happen in the second half of the year. Also, with the onset of the festive season, there should be a pick up in consumer demand.

MARUTI PACKS A PUNCH IN JULY

Maruti Suzuki India remained on top spot in July with over 22 percent YoY growth in domestic sales. The automaker registered positive growth in all segments in the month and sold a whopping 110,405 vehicles. The entry level combine of the Alto and Wagon R sold 37,752 units, up 31.3 percent YoY while the Dzire, Swift, Celerio and Ritz quartet sold 48,381 units, up 13.9 percent YoY. The Ciaz sold 2,099 units but sales are slowing every month. The S-Cross, which was launched last month, is clubbed with the Ertiga and Gypsy which together sold 6,916 units (+22.8%). The Omni and Eeco vans sold 11,887 units (1.8%).

Hyundai Motor India also had a good month and registered a near-25 percent rise in sales to 36,500 vehicles. The launch of the Creta compact SUV, which sold 6,783 units in July, was a fillip to overall numbers. Commenting on the July sales, Rakesh Srivastava, senior VP (Sales and Marketing), HMIL, said, “The tremendous response for the Creta, i20 Active and Elite i20 shows customers’ increasing preference for products offering novelty value in style, first-in-segment features and strong aftersales assurances.” Given the overwhelming response to the Creta, it is likely to drive the company’s sales in the coming months.

Honda Cars India also benefitted from the launch of its new Jazz, and reported an 18 percent rise in sales in the month (18,606). Sales of the new Jazz surpassed that of both the City and the Amaze. The product-wise split comprises 5,180 Citys, 4,589 Amaze sedans, 6,676 Jazz, 1,122 Brios, 909 Mobilios and 130 CR-Vs.  To manage the surge of demand for the new Jazz, Honda Cars India has begun juggling production at both its Greater Noida and Tapukara facilities.

Meanwhile, home-grown SUV maker Mahindra & Mahindra continued to struggle as the reducing gap between petrol and diesel prices, coupled with a slew of fresh launches, by competitors dented the company’s sales. M&M’s sales fell 13 percent to 14,456 units in July. Pravin Shah, president and chief executive (automotive), M&M, said, “While the auto industry is currently seeing muted growth, we do believe that the launch of some exciting new products will help it turn the tide. In addition, with the advent of a good monsoon till date and reduction in fuel prices, we expect sentiments to improve, leading to overall growth in auto sales.” The company recently launched the automatic version of its top-selling SUV, Scorpio and has also announced the launch of a new compact SUV named TUV 300. The TUV 300 is built on an entirely new platform and will hit dealerships by September.

Tata Motors, on the other hand, saw yet another month with positive growth in sales. Its passenger vehicle sales in July rose 13 percent to 10,389 units, as the GenX Nano continued to draw buyers. The Zest also continued to post decent sales with most buyers preferring the automated manual transmission variant. Under its Horizonext strategy, the company is planning to launch two new models in FY2016, with one likely being a replacement for the Indica, and the other an SUV based on the Hexa concept. Tata is hopeful of continuing to post double-digit growth for the rest of the year.

Volkswagen India’s sales were up 18 percent in July 2015 at 4,029 units (July 2014: 3,409). Michael Mayer, director, Volkswagen Passenger Cars, Volkswagen Group Sales India, said, “With the encouraging customer response for the New Vento, our sales have gone up by 18 percent in July 2015. Also, with a slew of exciting made-for-India products lined for the next two years and backed by an impressive sales performance for the sixth consecutive month, we are confident of further strengthening our position in the Indian market over the coming months.” 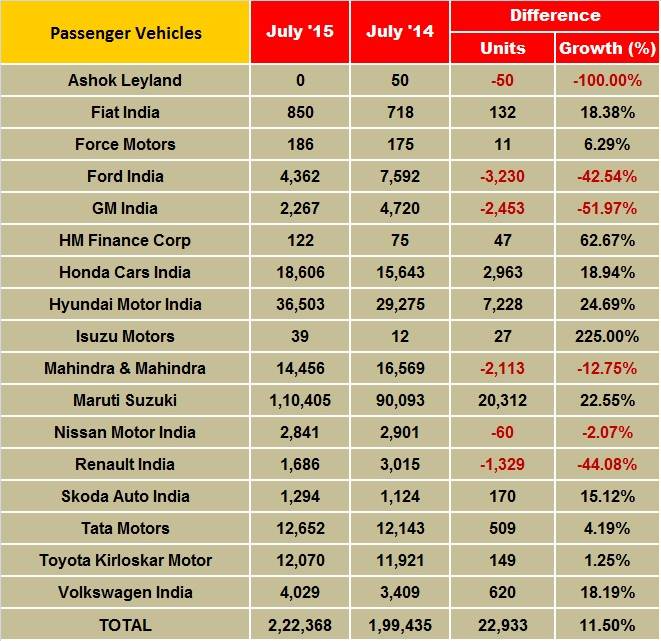 A slew of new product launches from the major two-wheeler companies have pulled up overall sales against the ongoing demand slowdown in rural markets, which are the main sales drivers of commuter motorcycles that comprise 70 percent of the two-wheeler market in India.

While the new models are garnering customer attention along with the soaring demand for scooters across urban markets, the slowdown in rural India continues to impact commuter bike sales.

This is clearly visible in the sales of Hero MotoCorp and the motorcycle portfolio of HMSI, TVS Motor Co and others. However, industry expects that Q2, beginning from July 2015 will be better than the previous quarter.

Hero MotoCorp, which commands 71 percent market share in the commuter bike segment, sold 4,87,580 units in July 2015, down 7.98 percent (July 2014: 529,862 units). The company, which saw its quarterly sales declining for its Passion range of commuter models and for its Xtreme model in the 126cc-150cc segment during Q1 FY2016, rolled out new cosmetically upgraded 150cc Xtreme Sports and 100cc Passion Pro models in July to revive sales.

Making new strides, Royal Enfield, which sold 200 units of its limited edition Classic 500 Despatch models online within 26 minutes of opening the bookings on its online store, has registered strong domestic sales of 39,867 units in July 2015, up by 48.78 percent. The company had sold 26,796 units in July 2014. Reporting its best ever quarterly income of Rs 1,097 crore for Q2 CY2015 (Q2, CY 2014: Rs 746 crore), it also reported its best ever quarterly sales of 106,613 units for the same period. Commenting on this, Siddhartha Lal, MD & CEO Eicher Motors said, “Royal Enfield continues its strong momentum by posting robust volume growth and maintaining a very healthy order book in Q2 2015. We continue to make investments as per our plans towards capacity expansion, enhancing our brand experience and in product development.”

Overall, if July numbers are anything to go by, the revival is well and truly on. 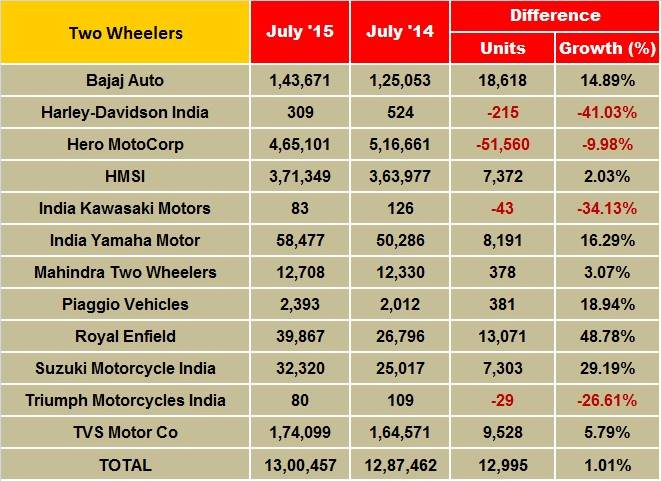 Carrying forward the momentum of the past 11 months, the medium and heavy commercial vehicle (M&HCV) segment registered positive sales numbers during the month. All the major CV OEMs maintained a strong performance in the M&HCV segment, thanks to growing demand from the infrastructure sector and the opening up of the mining sector.

Sustained growth has yet to filter down to the beleaguered LCV segment but but Mahindra & Mahindra and Ashok Leyland have increased their LCV sales in July year on year; Tata Motors’ LCV sales however remain in negative territory. A proper recovery for LCVs looks to be around 6-8 months away as micro-economic factors have to improve and drive last-mile connectivity which is critical for LCV sales.

Reporting on monthly truck rentals on key routes in the country, the Indian Foundation of Transport and Research and Training (IFTRT), says during July truck rentals dropped further by 2-3% on the back of  weak cargo offerings during the entire month.

According to IFTRT, the mandatory addition of ABS (anti-locking braking system) and speed limiters in new trucks from October 1 this year will increase vehicle prices by 4-5%. Therefore, it is very likely that end-August and September 2015 will see a spurt of truck purchases by fleet owners to save on costs.

Also fleet owners in the National Capital Region (NCR) are awaiting the National Green Tribunal’s  (NGT) order on banning the entry of 10-year-old diesel trucks in as a measure to improve deteriorating air quality. In case, NGT sticks with its April 7, 2015 order to ban these diesel trucks, there may be a further spurt in truck sales. 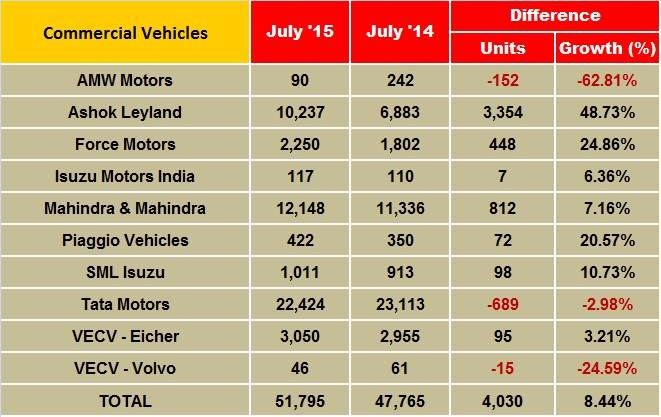 Shourya Harwani, Amit Panday and Kiran Bajad have contributed to this report.