After consistently posting growth for 14 months, January 2016 sales numbers for passenger vehicle manufacturers in India indicate muted sales for most of the large players. 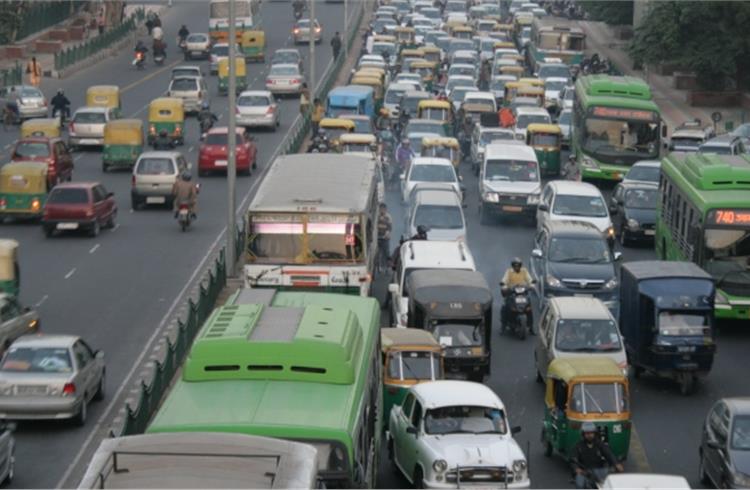 Carmakers feel the pressure of slowing sales in January

After consistently posting growth for 14 months, January 2016 sales numbers for passenger vehicle manufacturers in India indicate muted sales for most of the large players.

On the export front too, Maruti is seeing some pressure of slowing sales. Last month, the carmaker shipped 7,223 units, down 34.6% YoY.

Hyundai Motor India, the country’s No 2 passenger car manufacturer and the largest passenger car exporter, registered domestic sales of 38,016 units in January 2016, a growth of 9.3% year on year. However, on the export front, its despatches of 6,214 units were 37.9 percent down on January 2015’s 10,003 units exported.

Commenting on the January sales, Rakesh Srivastava, senior vice-president (Sales and Marketing), Hyundai Motor India, said: “Hyundai has started the year on a positive note registering domestic sales of 38,016 units with a growth of 9.3% over last year. The growth momentum of last year has continued, built by the strong performance of products like the Grand i10, Creta and i20 Elite/Active.”

Speaking on the sales performance for January 2016, Pravin Shah, president and chief executive (Automotive), M&M, said, “We are happy to have achieved this growth during January 2016 which has been possible due to the demand for our products especially the newly launched KUV100 and TUV300. The Auto Expo is expected to provide a strong fillip for the auto industry which would be beneficial for all OEMs. We are also hopeful that the upcoming Union Budget will have significant sops for the automotive industry, enabling it to post sustainable growth in times to come.”

Michael Mayer, director, Volkswagen Passenger Cars, Volkswagen Group Sales India, said, “Starting this year on a positive note, we are very happy to announce an increase in monthly sales for Volkswagen Passenger Cars for January 2016. We attribute this success to a consistent overall performance of our highly popular carlines, the Polo, Vento and Jetta, supported by an encouraging response to the recently launched 21st Century Beetle. With a pipeline filled with highly anticipated, performance-driven products, we look forward to a successful year ahead.”

Toyota Kirloskar Motor (TKM) reported sales of 8,511 units in the domestic market in January 2016. This number is 32.72 percent down on the 12,650 units sold in January 2015. On the export front too, January sales were little to cheer about for the Japanese carmaker – it shipped 745 units of the units of the Etios series, compared to 1,714 units exported in January 2015.

Commenting on the monthly sales, N Raja, director and senior vice-president, Sales & Marketing, Toyota Kirloskar Motor, said, “Our monthly sales have been affected. Part of it is a repercussion of the recent ban on registration of diesel vehicles with engine capacity of more than 2000cc in Delhi and NCR. We are looking forward to the Auto Expo where we will exhibit our prowess in the MPV segment and hybrid technology.”

At the Auto Expo, TKM will have an entire zone dedicated to hybrid and alternative fuel technology where the automaker will display Toyota’s cutting- edge innovations in both these fields.

Interestingly, the Camry Hybrid, the first locally manufactured hybrid in India has sold over 1,500 units in the Indian market since its launch in August 2013.

Renault India registered domestic sales of 8,031 units in January 2016 as against 3,203 units in January 2015, a growth of 151 percent. This sharp increase is thanks to the game-changing Kwid which was recently voted as Autocar India’s Car of the Year 2016.

Orders for the Kwid have crossed the 90,000 unit mark and Renault India says it has ramped up the production capacity at its Chennai plant to meet the growing demand for the product. The carmaker is also expanding its product, network and customer engagement. It has substantially increased its sales and service network reach in India, from 14 sales and service facilities in mid-2011 to 205 currently, and is targeting to reach 240 facilities by the end of this year. 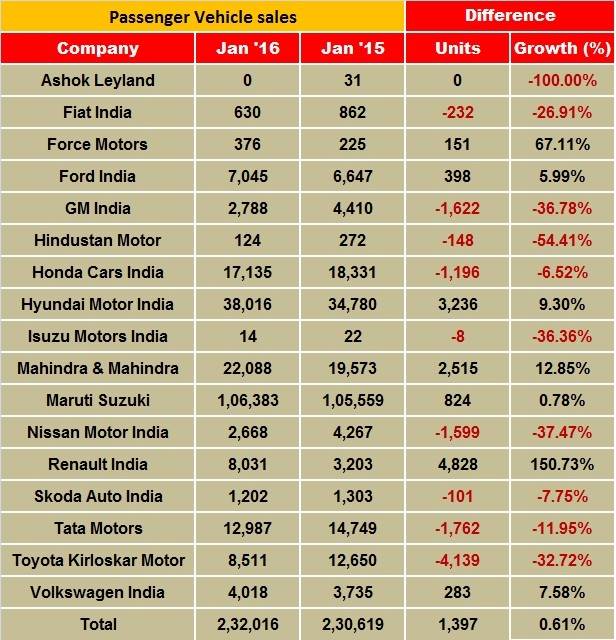 Two-wheeler OEMs in the grip of a slowdown

Hero MotoCorp, which saw another month of over 550,000 unit sales, is among those feeling the pressure of slowing commuter bike sales. The country’s largest two-wheeler manufacturer sold 563,348 units in January 2016 to register flat growth of 0.78 percent YoY (January 2015: 558,982). The company sales its scooter range, led by the new Maestro Edge and Duet, has helped it expand its market share.

Continuing to grow rapidly in terms of month-on-month sales, Royal Enfield registered its highest-ever monthly sales in January 2016. The Chennai-based motorcycle manufacturer recorded total domestic sales of 47,140 units in January 2016, marking a substantial jump of 67.42 percent on the 28,157 units sold in January 2015. The company had registered its previous best in October 2015, a festive month last year, when it had sold 44,138 units in the domestic territories.

A closer look at Royal Enfield’s calendar year 2015 sales highlights that it breached the 40,000 unit sales mark for the first time in August 2015, and since then it has continued to score over the 40k mark every subsequent month.

January 2016 marks the sixth month in a row that Royal Enfield has notched sales of more than 40,000 units per month. Collating all monthly sales data as reported by the company for the ongoing financial year, we glean that it has averaged monthly sales of 40,116 units during April 2015-January 2016.

According to Royal Enfield, it exported a total of 570 motorcycles in January 2016 as against 770 units exported in January 2015. The month saw a decline in exports by 26 percent YoY. However, on the cumulative front, the company registered total exports of 8,855 units during January 2015-January 2016, thereby marking a growth of 27 percent YoY. 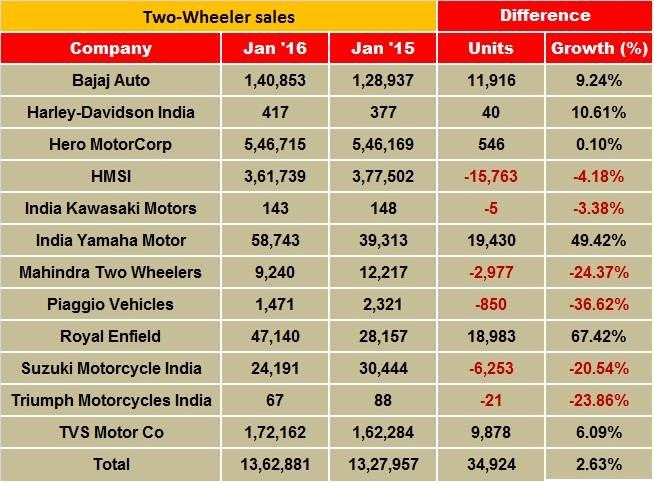 In what is good news for commercial vehicle players in India, sales in the first month of 2016 are positive across both medium and heavy commercial vehicles (M&HCVs) and LCVs. The LCV segment is seeing growth after nearly two years of declining sales.

Most of the manufacturers who released January sales numbers have notched gains in both M&HCVs and LCVs, which augurs well for the industry for the rest of the year. While there is no significant change in micro-economic factors  that affect the overall economy, falling diesel prices and increasing manufacturing and infrastructure activities are helping fleet operators.

VE Commercial Vehicles registered growth of 17.6% growth selling 3,415 units in the domestic market (January 2015: 2,905 units). Clearly, growing demand for the Eicher Pro Series is giving the company a fillip in its sales. 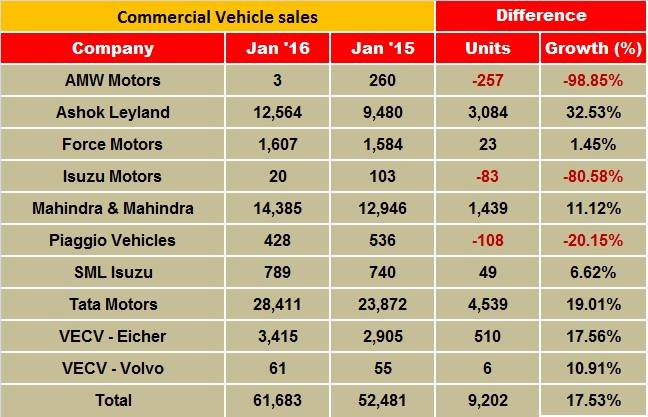