Carmakers with new models in their stable have benefited the most as consumers look to purchase a new set of wheels. But the newly imposed 1-4% infrastructure cess is set to play spoilsport for industry in the coming year. 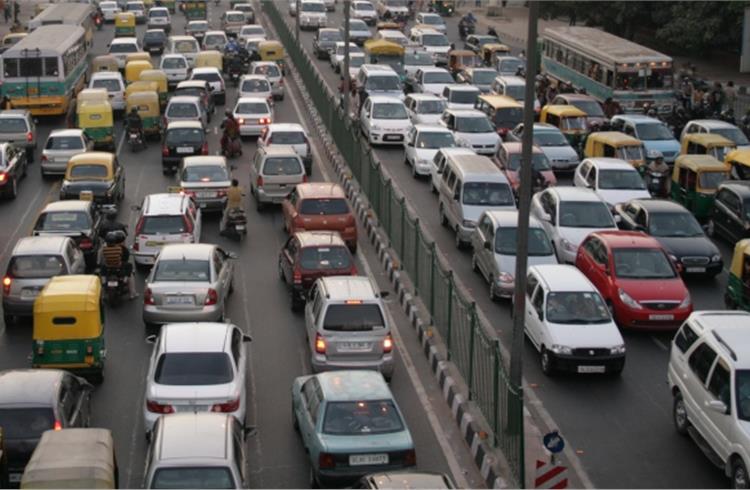 The Indian passenger car industry has seen a sales decline for the second consecutive month in February 2016, as a host of factors like production loss due to the Jat agitation in Haryana, selective ban on diesel SUVs and luxury cars in Delhi and cautious buyer sentiment ahead of the Budget, slowed down despatches.

According to sales data released by the Society of Indian Automobile Manufacturers (SIAM), passenger car sales in February fell 4.21 percent YoY to 164,469 units. This is the second decline after January when car sales fell 0.72 percent, after reporting 14 months of continuous growth. The recent dip in car sales points towards tough times ahead for the industry, and the Union Budget imposing an infrastructure tax of 1-4 percent on all conventionally fuelled passenger vehicles, the road to growth just got a little bumpier.

On February 29, finance minister Arun Jaitley had, citing concerns on growing pollution in Indian cities, imposed an infrastructure cess of 1 percent on small petrol, CNG and LPG-powered cars, 2.5 percent on small diesel vehicles and 4 percent on vehicles/SUVs with higher engine capacity. There is an additional 1 percent luxury tax on vehicles which cost over Rs 10 lakh. This new tax will make cars costlier and most carmakers have already announced price hikes ranging from Rs 2,000-4,000 on entry level cars to Rs 75,000-80,000 on more premium vehicles. Captains of the automobile industry have expressed their disappointment over the proposed move and said it could be a deterrent to sales and the industry’s growth prospects.

What saved the blushes for industry in February was a strong performance in the utility vehicle segment. UV sales rose 20.71 percent to 54,089 units, while van sales reported a growth of 13.26 percent to 15,596 units. As a result, overall PV sales remained in positive territory with growth of 1.68 percent to 234,154 units.

Industry bellwether, Maruti Suzuki India, saw a second consecutive month of muted growth in February. The country’s largest carmaker sold a total of 108,115 units, which constitutes only 0.2 percent YoY growth (February 2015: 107,892) and dragged the overall industry sales down. February 2016 saw the company’s production at the Gurgaon and Manesar plants disrupted by the Jat reservation agitation, causing a temporary suspension of production. The company says total production loss was around 9,000-10,000 units. It is also likely that sales at Maruti showrooms in the Haryana belt were adversely affected, which reflected on overall numbers.

Despite the additional taxes, Maruti Suzuki is still among the carmakers which have an advantage due to a larger portfolio of small cars.

With the Vitara Brezza (powered by a 1.3-litre diesel engine) launched at a highly competitive price (Rs 699,000 ex-showroom Delhi), Maruti Suzuki is now aiming to capture 50 percent market share in the booming compact SUV segment. Even as incremental volumes are expected in the coming months, capacity constraints are likely to affect the company’s overall sales in the future. Both its plants are running at near-100 percent capacity, and with the new Gujarat plant only to be commissioned in early 2017, Maruti’s growth is likely to be muted.

Hyundai Motor India sold 40,716 units in February 2016 (February 2015: 37,305), a YoY growth of 9.1 percent. Rakesh Srivastava, senior vice-president (Sales & Marketing), Hyundai Motor India, said, “Hyundai’s domestic sales grew by 9.1 percent on the strength of strong performance of the Creta, Elite i20 and Grand i10 despite logistic challenges of transportation of vehicles to North India and loss of many business days of dealership operations across Haryana.”

Hyundai was also at the receiving end of the agitation in Haryana and reportedly a dealership was burned down, resulting in disruption in sales.

Mahindra & Mahindra (M&M) has done well last month. Sales of its passenger vehicles segment (which includes UVs, cars and vans) comprised 23,718 units (February 2015: 18,817), a growth of 26 percent. Growing demand for Mahindra’s new models like the TUV300 and KUV100 have helped give a fillip to overall sales even as warhorses Scorpio and Bolero continue to provide a buffer with consistent demand.

According to Pravin Shah, president & chief executive (Automotive), M&M, “The imposition of an infrastructure cess of 1-4 percent for passenger vehicles, in the Union Budget, would increase prices of automotive products immediately. An increasing number of duties levied on automobiles is a cause of concern and we see the need for GST sooner than later. However we need to take it positively, in view of the strong emphasis laid on rural, agricultural and infrastructure plans for sound, sustainable and inclusive growth in the economy and to spur the much-needed demand.”

Toyota Kirloskar Motor sold 10,312 units in the domestic market last month, a decline of 12.62 percent YoY (February 2015: 11,802) growth. The carmaker says the Camry has seen over 100 percent growth compared to sales in February 2015, with almost 90 percent attributed to the Camry Hybrid.

Commenting on the monthly sales numbers, N Raja, director and senior vice-president (Sales & Marketing), Toyota Kirloskar Motor, said, “Our monthly sales for February have picked up when compared to January 2016. However, the ban on registration of diesel vehicles in Delhi and NCR still continues to affect our sales as the Delhi and NCR market constitutes 8-10 percent of our market share which comprises of both the Innova and Fortuner. Moreover, the unrest in Haryana has further impacted our business in that region with dealerships being closed for more than a week.”

Renault India has registered domestic sales of 8,834 units in February 2016 as against 3,401 units in February 2015, recording a robust growth of 158 percent. The sharp increase is thanks to the game-changing Kwid. The Kwid, Autocar India’s Car of the Year 2016, continues to drive Renault’s expansion plans in India with customer orders crossing the 100,000 mark. The company has ramped up the production capacity at its Chennai plant to meet the growing demand for the product apart from expansion of its product, network and customer engagement.

Ford India sold a total of 5,483 vehicles, down 7.98 percent YoY (February 2015: 5,959). Anurag Mehrotra, executive director (Marketing, Sales and Service), said: “The Indian automotive industry continues to deal with weak consumer demand as witnessed by increasing levels of discounting in the market. The Union Budget should deliver on driving rural growth and infrastructure development. However, it lacks a clear roadmap for the automotive sector, which has for long been an engine of India’s economic growth." 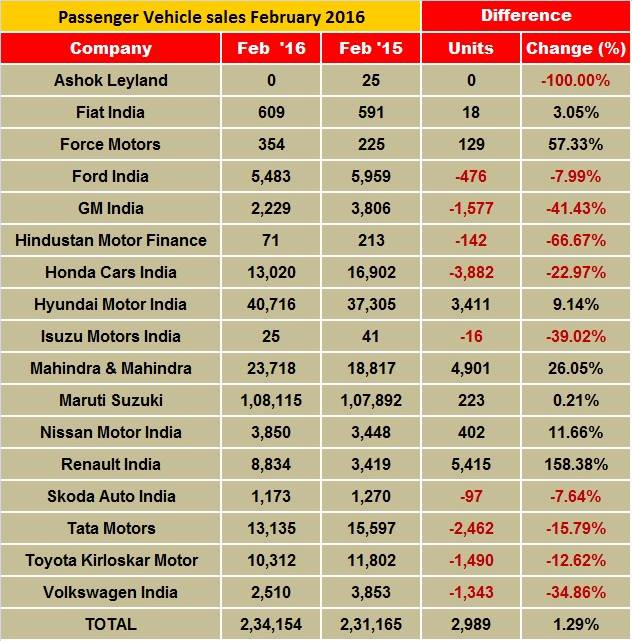 The big surprise came from the two-wheeler segment which clocked double-digit growth after many months, with a total sales of 13.62 lakh units. For a change, growth was driven by both scooters and motorcycles in February as the latter reported 11.05 percent growth in sales. Scooters continued to outperform with sales of 436,163 units (+17.71 percent).

Hero MotoCorp, India’s largest two-wheeler manufacturer, reported sales of 550,992 units in February, marking a healthy growth of 13.66 percent (February 2015: 484,769). The company says it managed to produce as many units at its Gurgaon, Dharuhera (Haryana) and Neemrana (Rajasthan) plants despite the local agitation which disrupted life in the region.

Launching its new family scooter model under phases, Hero MotoCorp rolled out the Duet in eastern India, which helped it record increased sales of this model last month. The company says the Duet, along with the Maestro Edge, has received a positive response in many local markets, helping consolidate its position in the local market.

Going forward, the company plans to launch its first in-house developed motorcycle, the Splendor iSmart 110 along with the Xtreme 200S, Duet electric scooter concept and a street-naked motorcycle concept, XF3R.

The company has also received close to 900 bookings of its recently launched NAVI model(s). The deliveries for this crossover, which is manufactured at the Tapukara plant, will begin in April 2016. Meanwhile, HMSI has started operations at its fourth plant in India, in Gujarat. Operations at the scooter-only plant are being ramped up on a daily basis. HMSI is yet to announce an official timeline for the start of local assembly operations of its globally popular twin-cylinder, 998cc adventure-touring motorcycle, Africa Twin.

The latest addition in the Apache series, the 198cc Apache RTR 200 4V, has seen a positive response from customers. The Apache series which sold a total of 20,858 units in January 2016, accounts for close to 25 percent of overall motorcycle sales for the company.

Talking to Autocar Professional, Roy Kurian, vice-president – sales & marketing, Yamaha Motor India Sales, had mentioned that the company expects the Ray ZR to fetch sales of close to 10,000 units per month. While this will give a fillip to scooter sales on one hand, the company is looking at expanding its dealership network to 650-700 by end-2016 from 500 in 2015. 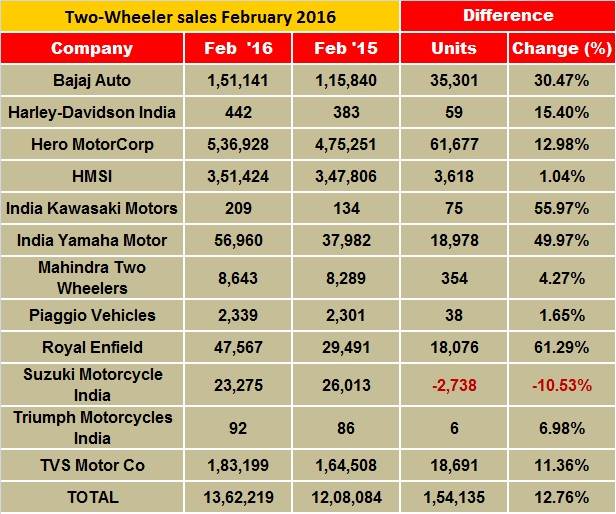 In the latest Union Budget, the government’s impetus on stepping up spending on infrastructure, especially the national highway building programs, will further fuel growth in the CV segment, especially M&HCVs which will be major beneficiaries of the infrastructure spend. The infrastructure sector has seen a total Budget allotment of Rs 218,000 crore including Rs 97,000 crore to accelerate expansion of highways and rural roads.

Talking about CV growth prospects, R Ramakrishnan, senior vice-president, Commercial Vehicles, Product Strategy and Planning and Customer Value Creation, Tata Motors, said, “Things are improving for the commercial vehicle segment, though it is a slow recovery. M&HCVs continue to show good growth and it will probably remain that way. The emphasis on the mining and opening up of the infrastructure sector are all positives for the M&HCV sector. I think it will continue to show growth, although not in the same percentage because the base is increasing compared to last year but it will be heavy growth for M&HCVs.”

As regards LCVs, he said the sector thus far has been negative and has shown growth only for the last couple of months. While growth is slated to come soon to LCVs, it will not be sudden or as large as for M&HCVs. Financiers are still cautious. “I think LCVs will take some time before they start recovering on larger volume or percentage growth. But they are definitely on the positive track and after another few months we will able to say confidently that the bottom is behind us. Right now, I will be a little guarded on LCVs,” said Ramakrishnan.

With the major CV players revealing their February sales numbers, it is clear that M&HCVs are fueling their growth. 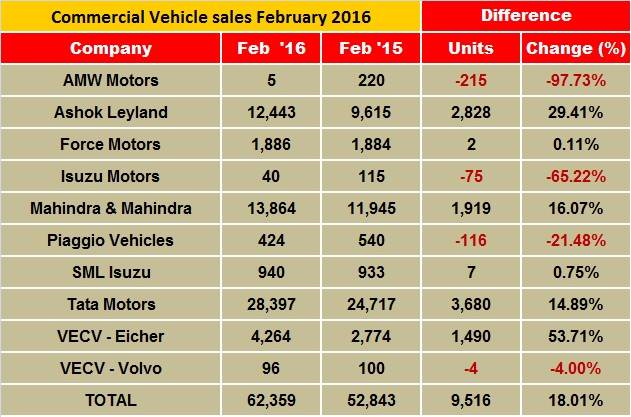