In a month which saw total two-wheeler industry despatches of 1,615,071 units, the popular Hero Splendor and Honda Activa account for 27 percent. 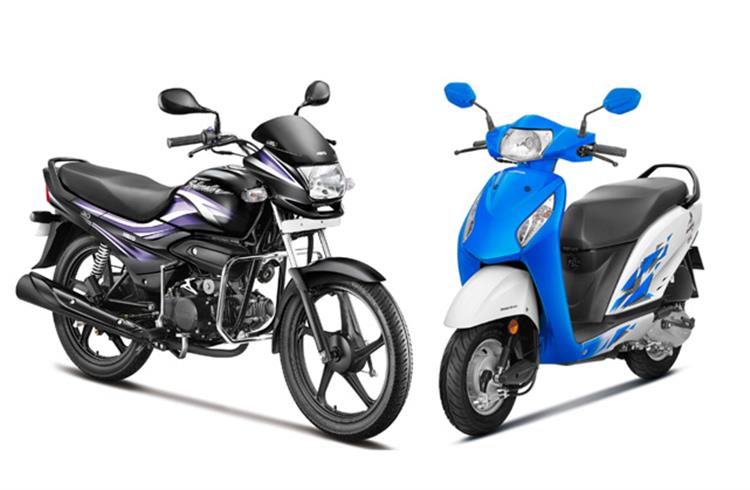 The Hero Splendor is continuing its strong run and has outsold India’s highest-selling scooter, Honda Activa, for the sixth month in a row. With Hero MotoCorp despatching 244,241 units, the Hero Splendor easily takes the No.1 spot, 39,002 units ahead of the Honda Activa, which saw total despatches of 205,239 units in February 2019.

How important both these two best-selling products are for their manufacturers can be gleaned from the fact that the Splendor, available in five variants, accounts for a substantial 40 percent of Hero MotoCorp’s total two-wheeler sales of 600,616 units last month, and the Activa accounts for 50.23 percent of Honda Motorcycle & Scooter India’s total sales of 408,559 two-wheelers in February 2019.

A little more math and these two products' importance to the overall Indian two-wheeler sector is even more obvious: together the Splendor and the Activa have sold 449,480 units in February 2019, accounting for 27.83 percent of total despatches of 1,615,071 units from the Indian two-wheeler OEMs (-4.22%).

Another high-selling Hero MotoCorp motorcycle – the HF Deluxe – takes third place with 184,396 units, albeit its sales are lower than the 195,706 units it sold in January 2019. The 100cc mass commuter bike remains a popular buy and with demand returning to the motorcycle market, expect to see the HF Deluxe logging better numbers in the coming months. According to the company, the HF Deluxe is not only sold in the rural and semi-urban markets, but is also witnessing demand in the urban pockets too.

Honda's CB Shine, the top-selling motorcycle in the 125cc class, is India’s fourth largest selling two-wheeler umbrella with wholesale volumes of 86,355 units in February 2019, similar to the 86,616 units sold in January 2019. Honda expects the demand for its 125cc CB Shine models to be back on track in Q3 FY2019.

Likewise, the Bajaj Pulsar stays glued to No. 5 position with despatches of 84,151 units, slightly down from the 85,099 units despatched in January 2019. The rejig in the Pulsar line-up has evidently fetched good results to the company as the domestic wholesale despatches have improved by a substantial 25,000–30,000 units per month during the ongoing fiscal. This growth can be clearly attributed to the new models added in the Pulsar range such as the Classic 150, Twin Disc 150 and others.

If there is an award for soldiering on in the midst of strong-selling motorcycles and scooters, then it should go to the TVS XL Super moped. At No. 6, the robust performer sold a total of 75,001 units last month, indicating that there is still a lot of steam left in the warhorse. TVS Motor Co, the sole moped manufacturer in the country, has sold a total of 809,517 mopeds in the first 11 months of FY2019, a 3.63 percent year-on-year increase. Will upcoming BS VI emission norms hamper the ride of the moped?

The Hero Passion is the third Hero motorcycle in the Top 10 list and demand for this one seems to be on the upswing with a month-on-month rise in its fortunes. A total of 67,374 units were despatched in February 2019, a substantial 41 percent more than the 44,511 units sold in January 2019.

Nonetheless, the Passion, which once used to sell more than 100,000 units per month, appears to have fallen because of multiple factors including the absence of a clear differentiation in the brand perception of the Passion, Splendor and the HF Deluxe marquees within Hero MotoCorp’s motorcycle portfolio. Secondly, the rise of the HF Deluxe has cannibalised the prospects of the Passion brand in the domestic market along with the usual cut-throat market competition. But the Passion’s return ride to the higher rung of the Top 10 seems to have begun.

At No. 7 is Bajaj Auto's Platina commuter motorcycle with volumes of 53,044 units in February 2019, down on the 58,231 units despatched in January 2019. The Platina portfolio is yet another successful implementation of disruptive product strategy by Bajaj Auto in the domestic market. Starting with a sub-Rs 50,000 price-tag, the Platina comes in two variants – 100cc and 110cc. The Bajaj Platina has clearly grown to become a serious rival to Hero MotoCorp and TVS Motor Company while eating into demand for Honda’s Dream commuter bike series.

The last two spots in the Top 10 list are taken up by two other scooters – the TVS Jupiter and the Suzuki Access 125, both also strong performers in the Top 10 Scooters List and below the biggest of them all – the Honda Activa. They essentially have exchanged places with the Jupiter taking ninth spot with 48,688 units and the Suzuki Access 125 at tenth place with 48,265 units. Both are down on their January 2019 numbers but the fact remains that the scooter market is seeing a slowdown. With a total of 492,584 units in February 2019, sales were down 12.14 percent year on year.

With just a month to go for the fiscal year 2019 to close, OEMs are keeping their fingers firmly crossed that an uptick comes their way.