In a year that scooter manufacturers would like to put behind them, well-entrenched models continue to see demand while some newcomers make their presence felt. 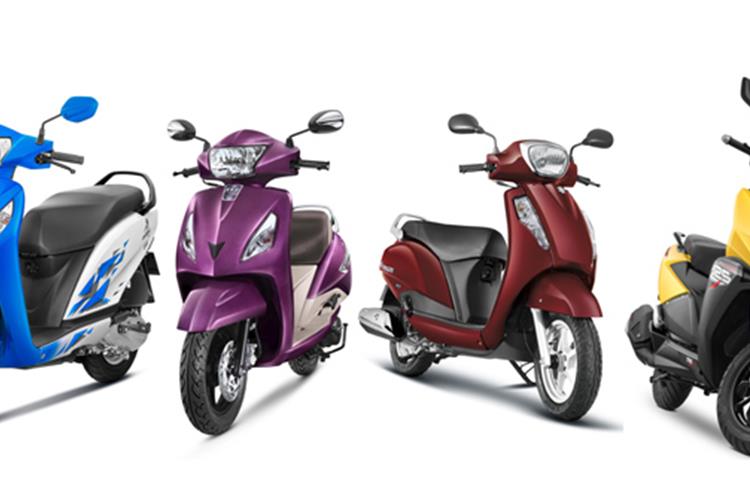 FY2019 was a year domestic scooter manufacturers would like to forget in a hurry. Not only were total sales – 6,701,469 units – in negative territory (-.27%) for the first time in a decade but demand looks to be in slow lane for the next few months. This even as demand for motorcycles has picked up sizeably.

The pressure on the scooter market can be seen from the performance of the market leader, the Honda Activa. While it remains the boss of the two-wheeler market, its year-on-year has slowed down. In FY2019, the popular scooter sold a total of 3,008,334 units, down 4.6 percent on FY2018’s sales of 3,154,030 units. In fact, the reduced sales of the Honda Activa impacted the overall scooter segment which was the only vehicle segment to be in negative territory last fiscal.

The TVS Jupiter, the longstanding No. 2 player, also felt the pressure of slowing sales. At 788,456 units sold in FY2019, the Jupiter is down 2.76 percent on FY2018 sales of 810,916. Nonetheless, the 110cc Jupiter continues to be a strong contributor to TVS Motor’s monthly sales performance and helped the Chennai-based manufacturer to scale up its scooter market share to 18.52 percent from 16.36 percent in FY2018.

The big gainer in the past fiscal has been the 125cc Suzuki Access. With sales of 539,123 units, it posted handsome year-on-year increase of 32 percent (FY2018: 408,334). With this sterling performance, it also jumps two ranks from fifth place to third. Continuing demand for the Suzuki Access 125 means that it is the best-selling 125cc scooter in the country. The company’s turnaround efforts are finally visible as it continues to work not only on its product portfolio but also on the dealer development side.

The Honda Dio remains at No. 4 position with sales of 446,264 units, which marks a 9 percent YoY sales increase (FY2018: 409,233). The Dio enjoys strong brand equity among collegians and new-age commuters, with Jharkhand, Karnataka and Maharashtra being strong markets.

Hero MotoCorp’s Maestro rides in at No. 5, having dropped from No. 3 position a year ago. With sales of 272,432, this scooter has seen a steep fall in its fortunes – down a massive 42 percent (FY2018: 477,822). The company plans to ride the surging demand in the 125cc market with its upcoming 125cc Maestro Edge. It could be a move that could re-energise the Maestro brand.

Next up is the TVS NTorq, which was launched in February 2018, has seen its first full fiscal year of sales. A regular in the monthly Top 10 scooters list, it’s no surprise then that this swashbuckling 125cc scooter enters the annual list for the first time. TVS had targeted sales of 200,000 units in its first year of commercial sales and at 213,039 units, the NTorq has achieved the goal averaging 17,750 units each month. TVS would be happy with that performance, which makes the NTorq the second best-selling 125cc scooter in the country.

The other Hero scooter in this list is the Duet. Like the Maestro, the Duet too saw its sales impacted in a tough year. At 175,239 units sold in FY2019, this product’s sales are down 21 percent YoY.

At No. 9 is the Hero Pleasure, which drops one position from FY2018. At 164,515 units in FY2019, its sales are down 10 percent YoY. What this means is the dour combined performance of the Maestro, Duet and Pleasure have dragged Hero MotoCorp’s fortunes down. As a result, the company saw its scooter market share drop from 13.15 percent in FY2018 to 10.73 percent in FY2019. Expect the think-tank at India’s largest two-wheeler company to brainstorm ways to regain market share in FY2020.