Second-generation of the i20 premium hatchback is a success story for Korean carmaker. 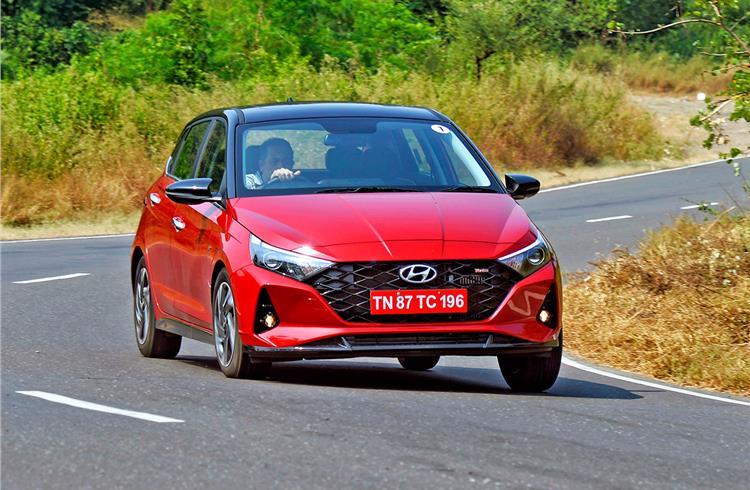 Since its introduction in 2008, the Hyundai i20 has redefined the premium hatchback segment in India by offering features such as a sunroof that were never heard of in the segment. This car was the one to start it all and the segment is now full of products such as the Maruti Suzuki Baleno, Honda Jazz and Volkswagen Polo.

Fast forward to July 2014, which saw the roll out of the second-generation i20, and as per Autocar Professional’s data analytics, the snazzy hatchback has sold over 800,000 units in the domestic market in a span of seven years.

The second-generation or the Elite i20 and the latest third-generation model currently on sale in India have garnered a cumulative 810,893 units in the domestic passenger vehicle market. While the initial year right after launch (FY2015) was a slow one with total sales of 77,747 units, the car picked up momentum immediately after. 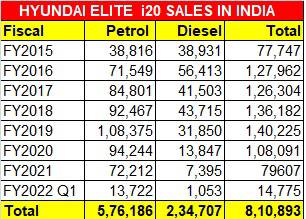 The i20 is a sub-four-metre hatchback, and in the Elite i20 form, used to be offered with a 1.2-litre, four-cylinder, naturally-aspirated petrol and a 1.4-litre turbocharged diesel engine option. In May 2018, Hyundai Motor India introduced a CVT option along with the petrol powertrain as well.

The data (depicted above) shows the popularity of Hyundai’s 1.4-litre, U2 CRDi motor, which went to command up to 50 percent sales contribution in the launch year, slowly coming down to 13 percent in FY2021, when the strict BS VI emission norms changed the dynamics of the Indian market, which started tilting more towards petrol.

However, it was only in November 2020, that Hyundai Motor India introduced the third-generation iteration of the global hatchback, which now became even more premium in terms of styling and features, and also proclaimed some best-in-segment drivetrain options.

Both outgoing and new model registered combined sales of 79,607 units in FY2021, while Q1 FY2022 has already seen the car rake in sales of 14,775 units between April and June this year.

The carmaker has also offered a host of drivetrain options, including a five-speed manual or CVT with the 1.2 petrol, a six-speed manual with the 1.5 diesel, a 7-speed dual-clutch auto or a 6-speed intelligent clutch-less manual transmission with the 1.0 petrol.

A Bose premium surround-sound system, sunroof, six airbags, and a large touchscreen infotainment system are features that keep the i20’s identity distinct from the competition. While it has certainly become pricier than before, the Hyundai i20 aces the game when it comes to offering the best and a truly premium experience in the B+ hatchback segment space.

But, arch rival Maruti Suzuki Baleno, which was launched a year later in October 2015 than the Hyundai and still overtook it in terms of sales by breaching the 900,000-unit sales milestone in just 66 months, is due for a full-model change this fiscal.

It would be interesting to see how the i20 holds its fort when the updated Suzuki is launched in India. Until then, the feature-rich and premium Hyundai i20 has all the market potential to continue weaving its success story in the country.