The months of October and November 2015 highlight a classic case of a close fight between the top two contenders for the number one slot. 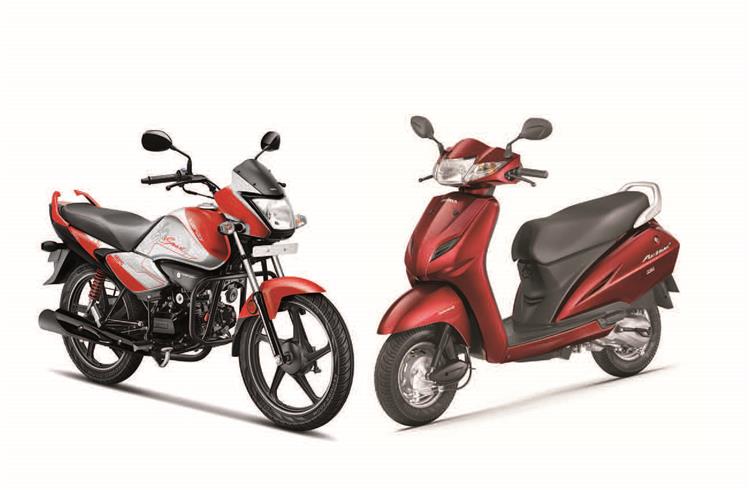 The last two months have also seen a roller-coaster ride for almost each two-wheeler brand present in India. While, on one hand, October gave a great month of sales to the market, November saw sales declining by a sharp difference. In November 2015, total two-wheeler sales fell by 335,674 units compared to October numbers.

Being the top two performing companies, Hero MotoCorp and Honda Motorcycle & Scooter India (HMSI) had to absorb the sharp fall in sales. Of the above-mentioned number signifying the overall sales decline, the fall in Hero’s (down by 13.90 percent or 86,851 units) and Honda’s (down by 27.77 percent or 119,941 units) month-on-month sales together accounted for 206,792 units.

In terms of best performing models, while Honda’s Activa had claimed the top spot in October 2015 leaving Hero’s bestseller, the Splendor brand, behind for the number two spot, the latter has now regained the top title once again.

As compared to the Top 10 two-wheelers in November 2014, the top six models have remained at their respective slots this year also.

At the third and fourth slots are the popular commuter motorcycles from the stable of Hero, the 97.2cc HF Deluxe and the Passion series (Passion Pro, Passion XPro and Passion Pro TR) that contributed by sales of 94,704 units and 86,060 units respectively last month.

At the fifth position was Honda’s 125cc best-seller, the CB Shine that garnered total sales of 61,626 units in November 2015.

TVS Motor’s top selling scooter Jupiter made it to the seventh slot with sales of 51,768 units, taking away the position from the Honda Dream series, which had sold 56,414 units and occupied the seventh rank in November last year.

The ninth and tenth positions were held by Hero’s Glamour model(s) and Bajaj CT100 that sold 46,050 units and 42,806 units respectively.

All in all, as compared to last year’s (November 2014) Top 10 two wheelers, only two changes are seen – the TVS Jupiter replacing Honda’s Dream series and the Bajaj CT100 replacing the Bajaj Discover model – in November 2015’s Top 10 best-selling two wheelers. 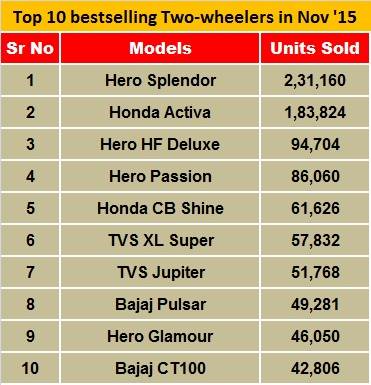