Green shoots of recovery seen in PVs, July sales bring the smiles back

With cumulative sales of 14 OEMs at 198,310 units, the 99 percent market recovery to July 2019 sales indicates the buzz is back in the passenger vehicle market. 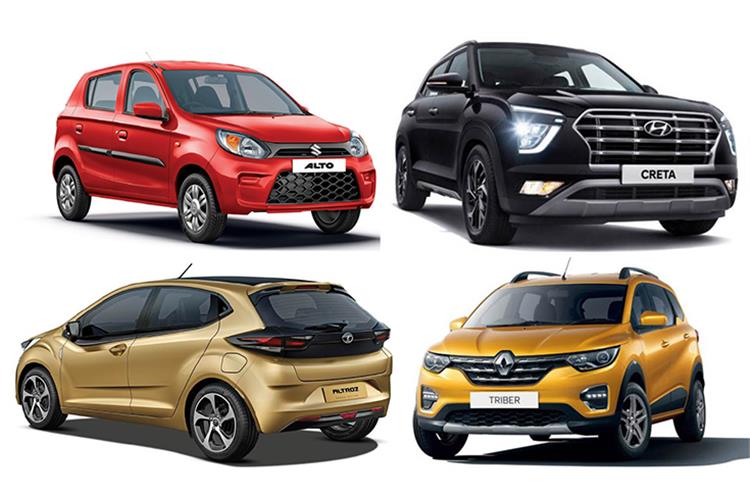 Finally, the buzz is back in the passenger vehicle (PV) industry. After months of depressing news, pandemic-induced loss of demand, truncated manufacturing operations due to lockdowns and  social distancing, the uptick in monthly sales as announced by most PV manufacturers in their July numbers comes as welcome news.

A fortnight ago, apex industry body SIAM had released the Q1 FY2021 (April-June 2020) sales numbers and the picture looks grim to say the least. With all vehicle segments and 13 sub-segments badly in the red and  overall industry numbers down year on year by a massive 75%, India Auto continues to be in trouble. The passenger vehicle segment, which is witnessing its longest and deepest slowdown in the past 20 years, registered 78 percent de-growth in Q1 FY2021 at 153,734 units (Q1 FY2020: 712,684), a decline which has been continuing for nine consecutive quarters now.

As the economy shifts gears and industries resume operations following safety norms of social distancing, the automotive sector too is trying to make its way to normalcy at least in terms of sales volumes.

The passenger vehicle (PV) segment which announced its sales results for the month of July has some good news to offer after a dry spell of April, May and June - hit by demand paralysis due to the negative sentiment driven by the Covid-19 pandemic.

After a streak of sharp declines, the industry, for the first time, in the past few months has reported a mere 1 percent downturn at cumulative wholesales of 198,310 units across 14 PV manufacturers in the country, compared to the 200,524 units sold in July 2019. Going forward, there is likely to be an improvement in monthly numbers, given the upcoming new product launches, fast-rising demand from rural India and some parts of the country returning to work.

Here’s taking a closer look at some of the key players which have released their sales numbers.

Maruti Suzuki: 97,700 units (1%)
Leading the revival from the front is the PV industry bellwether, Maruti Suzuki India which has posted marginal 1.3 percent growth with domestic sales volumes pegged at 97,768 units (July 2019: 96,478). Even though it is a marginal improvement, it signals better times ahead for the.

The company announced a noticeable 49 percent uptick for its entry-level Alto and S-Presso hatchbacks that went home to 17,258 buyers (July 2019: 11,577), thus indicating the return of the  consumer into the market, as well as the preference to safer, personal mobility solutions in these times of the pandemic.

The company is witnessing strong demand for its newly launched Creta SUV that was introduced on March 16, just before the nation-wide lock-down. Hyundai in fact, claims already receiving 55,000 bookings for the new Creta and has delivered 20,000 of them to customers within four months since launch.

The carmaker is also betting big on sales from its Venue crossover as well as the recently updated Verna sedan.

For the quarter ended June, Tata Motors’ market share in the PV industry stood at 9.5 percent. That information came from PB Balaji, CFO, Tata Motors while detailing the company’s results on July 31. That’s double market share the OEM saw at the end of FY2020, resulting in a fourth rank in the Indian PV industry. Tata Motors’ PV market performance is fuelled by its ‘re-imagining PV’ strategy with a refreshed portfolio of models. Even as the 9.5 percent market share is a high “in the last many quarters”, it’s not time for Tata Motors to celebrate yet. “We intend to repeat this many many more times before we can say that it’s really happened in a sustainable basis,” says Balaji. Tata Motors believes the performance is sustainable and therefore the team is

“quietly confident “ that it’s on the right track.

Commenting on the performance, Veejay Nakra, Chief Executive Officer, Automotive Division, M&M, said: “At Mahindra, we are happy to see a growing trend in our overall vehicle sales, buoyed by the continuing revival in demand, primarily in rural and semi-urban India. It is encouraging to see that the enquiry and booking levels in July are significantly higher compared to June, both for utility vehicles and small commercial vehicles. As we ramp up production, the biggest challenge is on the supply side and working around these challenges is our top priority.”

Kia Motors India: 9,181 units
If there is one company which seemingly can do no wrong, then it seems to be Kia Motors India. As per Autocar Professional estimates, the Korean carmaker sold a total of 9,181 units in July, helping it drive past the 100,000 unit sales milestone in a scant 11 months.

The company is now betting big on the upcoming Kia Sonet compact SUV, which is to get its global reveal on August 7, followed by a market launch in September.

Toyota Kirloskar Motor: 5,386 units (-48%)
The Japanese carmaker has reported total domestic sales of 5,386 units in the month, registering a 48 percent de-growth (July 2019: 10,423). According to Naveen Soni, senior VP (Sales & Service), Toyota Kirloskar Motor, “Despite various challenges, July witnessed better sales in terms of both retail and wholesales when compared to June. The first month after unlock (June) witnessed demand rekindling and retails being very good due to several factors including  pending customer orders as well as pent up demand accumulated as a result of the extended lockdown.”

“However July, as a result of sporadic lockdowns and extensions being imposed in several parts of the country, led us to a situation wherein our business remained shut in up to 20 percent of the market, in and around mid-July. It was due to the rest of the 80 percent of our business that has helped us close the month with a higher than June retails,” he added.

The company, however, has announced its foray into the compact crossover segment, and is in the works to introduce the Maruti Suzuki’s Vitara Brezza under its own nameplate, most likely the Urban Cruiser, in the upcoming festive season.

According to Rakesh Sidana, Director – Sales, MG Motor India, said, “The overall market environment continues to be challenging with uncertainties due to variable lockdowns in various phases. The component supplies continue to remain impacted especially from the Chennai region. However, despite these challenges, our production has remained at similar levels in July as compared to June 2020 and we expect the situation to improve during the festival season.”

All in all, while it is still early days yet for the PV industry before it starts to drive firmly onto growth road, the much-improved July numbers are pointers to green shoots of recovery, albeit it can also be pinned down to pent-up demand from the Covid-impacted first quarter of the current fiscal. But OEMs are hardened warriors and they will be keeping their fingers firmly crossed this time around, hoping that August turns out to be an august month on the sales front. 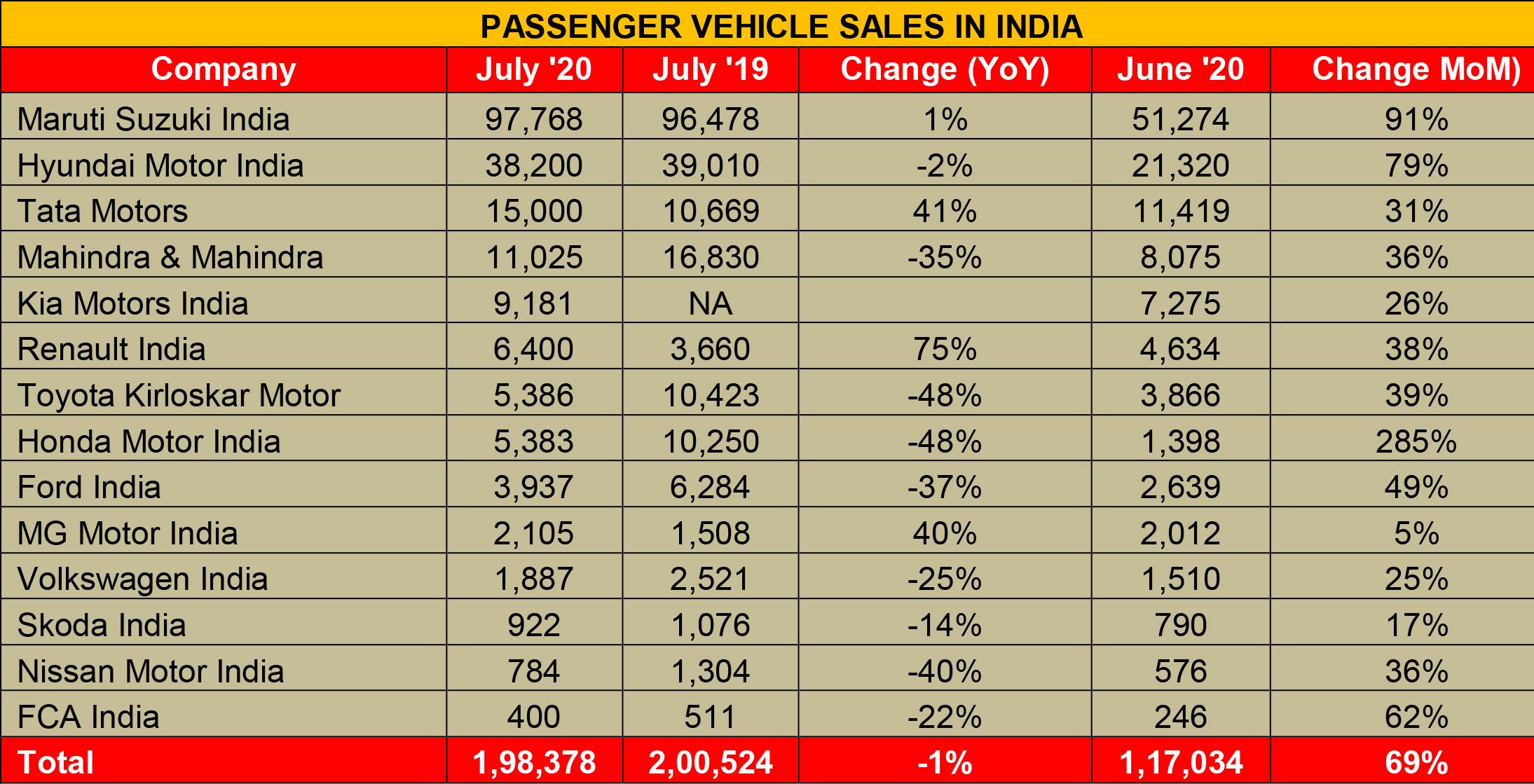