Riding on a combination of Dhanteras-Navrati-Diwali and a gaggle of new products, SUVs notch robust 22% YoY growth and enable the PV segment to enter positive territory. However, all other vehicle segments continue to be in the red. 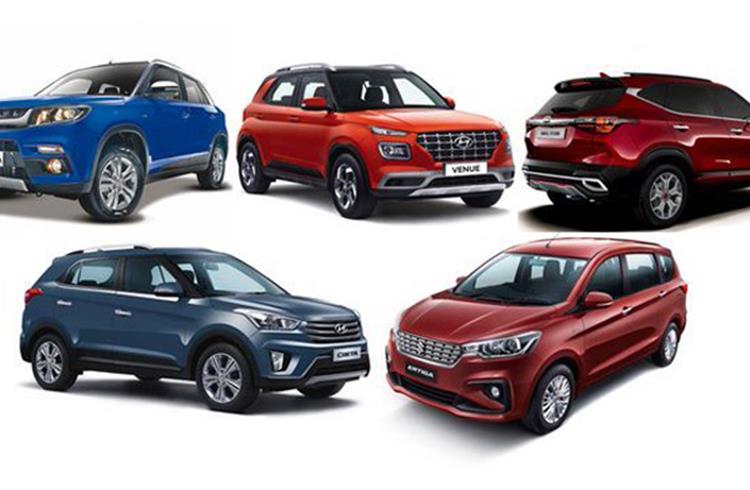 The numbers for October 2019, the month which uniquely had Dhanteras, Navratri and Diwali in it, are out. If industry stakeholders expected fireworks, then they would be disappointed because while the rate of sales decline has slowed, the worry about the months ahead remains even as the industry sees 11 straight months of overall sales decline.

According to Rajan Wadhera, president, SIAM, "The market has expanded with the entry of two new OEMs in the PV segment. A sizeable percentage of the UV growth comes from the new models in the market and it is not driven by excessive discounting. So, we can clearly see that people are giving value to novelty."

"Retails due to the festive season have been good and if we compare it to the festive period last year, it is a lot better. Various measures have led to this – the lending rates are getting lowered and there's also a positive sentiment with new models coming in. This is a good sign and we wish that the same continues in November and December as well.”

"With regard to PVs, most of the industry is now sitting at stock levels of less than one month. So we have resumed normalcy on that front and are hopeful of growth in the coming days. Corresponding to the wholesale numbers, retail data from the national vehicle registration repository Vahan shows that a total of 296,642 PVs were registered in October 2019, indicating 13.92 percent growth (October 2018: 260,384). LCVs, as per Vahan, recorded a growth of 15.68 percent with 279,565 units getting sold (241,665) and also contributing to 94 percent of the total commercial vehicles.

"From our surveys and discussions with dealers, we are seeing people opening up to purchase of vehicles. As an industry body, we are hopeful that the months of November and December also continue to be on similar lines and fetch good retail numbers," he added on an optimistic note.

According to Wadhera, "There has been an efficiency improvement in the commercial vehicle space due to factors such as the revised axle-load norms as well as GST leading to quick transit times on the highways. On top of that, right now due to the general economic slowdown offering less demand for transfer of goods, there is a lack of demand for CVs as well. BS VI pre-buying will happen closer to the April 2020 deadline around February and March, and that is where we are hopeful that it will contribute to increased numbers in the CV segment."

"Two-wheelers majorly thrive in rural India and this time around, crops were destroyed due to several excessive rains and floods in many parts of the country, also delaying harvesting. So, we expect the money flowing into the rural markets by November and that is when we would see a growth in the two-wheeler sales," Wadhera added.

Month-on-month revival underway
Even as the industry could be seen to have been in shambles over almost a full year, there has been some improvement in numbers over the past few months.

A month-on-month analysis of the segments shows that October was significantly better than September, given the momentum around the festive season. Overall industry sales grew a notable 8.53 percent with 2,176,136 units in October 2019 (September 2019: 2,004,932).

While a full revival is still some time away, SIAM is of the belief that things are getting back on track as the worst is already behind the industry. “The pattern of festive season discounting, which is generally followed by year-end discounts are normal practices, and we think that they are only bound to increase sales," Wadhera concluded. 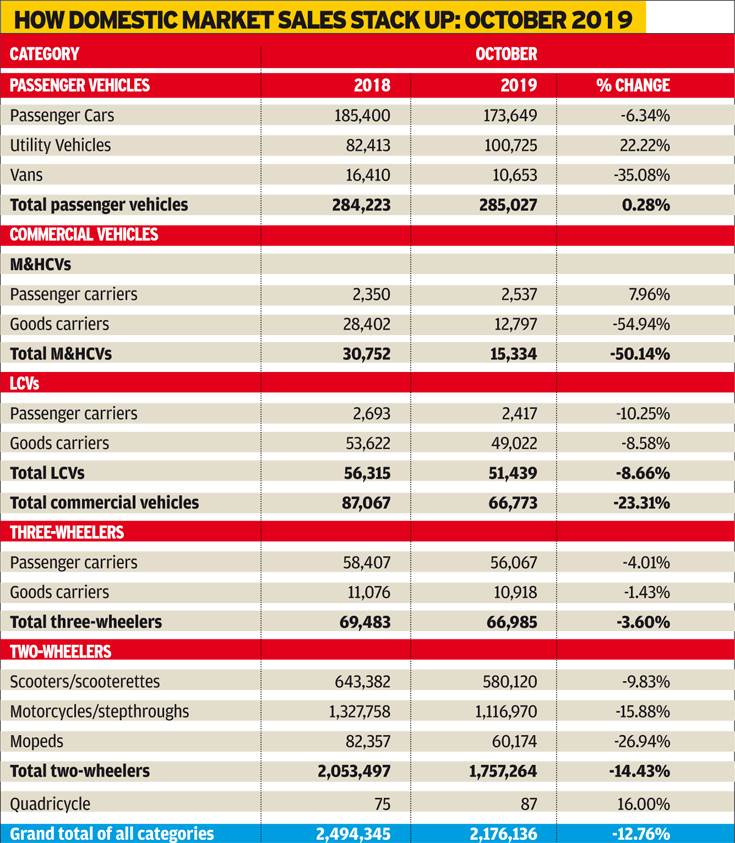 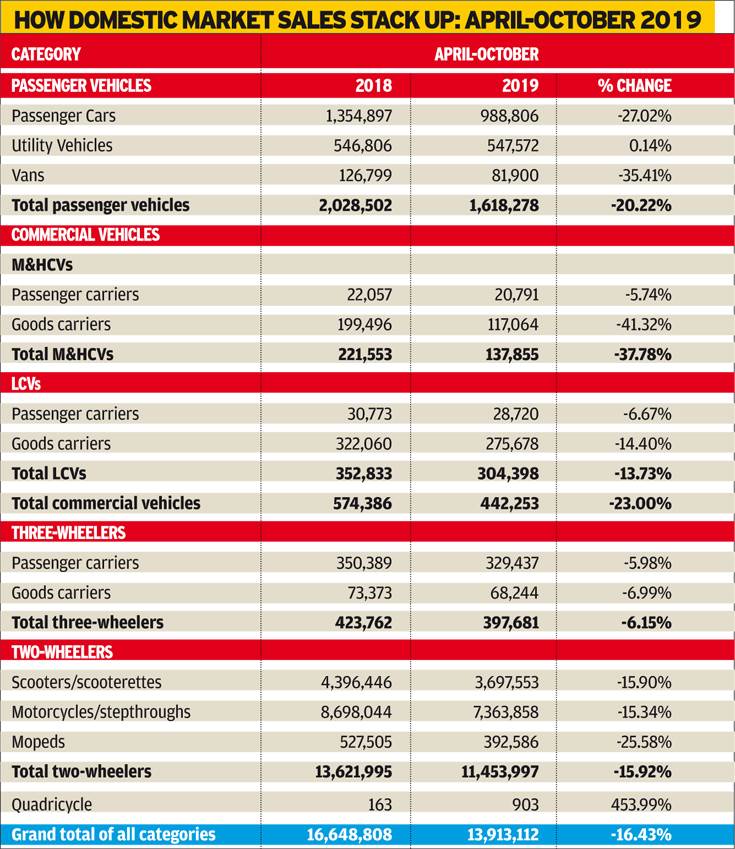