The ratio of electric two-wheelers to overall two-wheeler industry sales has grown three-fold from the 1.16% in CY2021, indicating the shift in consumer preference and huge market potential 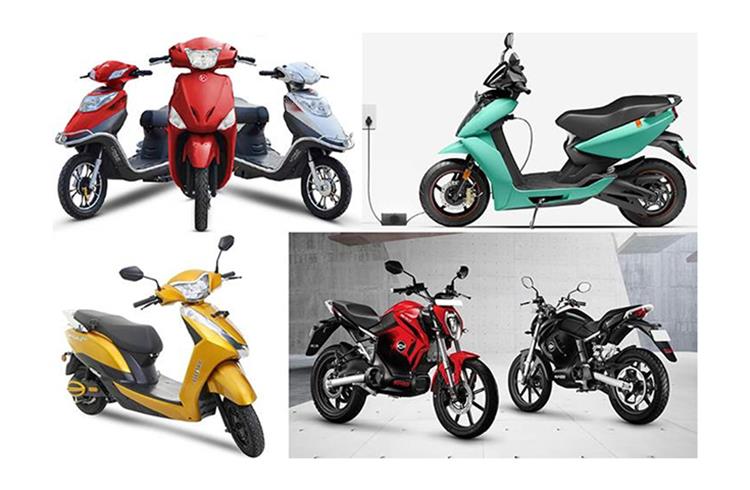 If ever proof was required of the growing demand for electric mobility in India, particularly in its most affordable form – electric two-wheelers – then the first-half (January to June 2022) retail numbers reveal that truth.

As per the latest electric two-wheeler industry retail sales data, as revealed in FADA president Vinkesh Gulati’s tweet on July 12, a total of 240,662 units have been sold in the first half of this year. With this number, e-two-wheelers have contributed to 3.6% of total two-wheeler retail sales in first-half CY2022 (66,95,434 units).

What is also driving the two-wheeler consumer shift to EVs is the marked increase in prices of petrol-powered scooters and motorcycles, particularly due to the technological upgrade to BS VI in April 2020. As is known, the BS VI mandate has necessitated the use of electronic fuel injection (EFI) technology which is significantly more expensive than the now-defunct carburtettor technology.

Furthermore, it is understood that apart from the higher acquisition cost of BS VI two-wheelers, the cost of repair is also higher compared to non-EFI products. 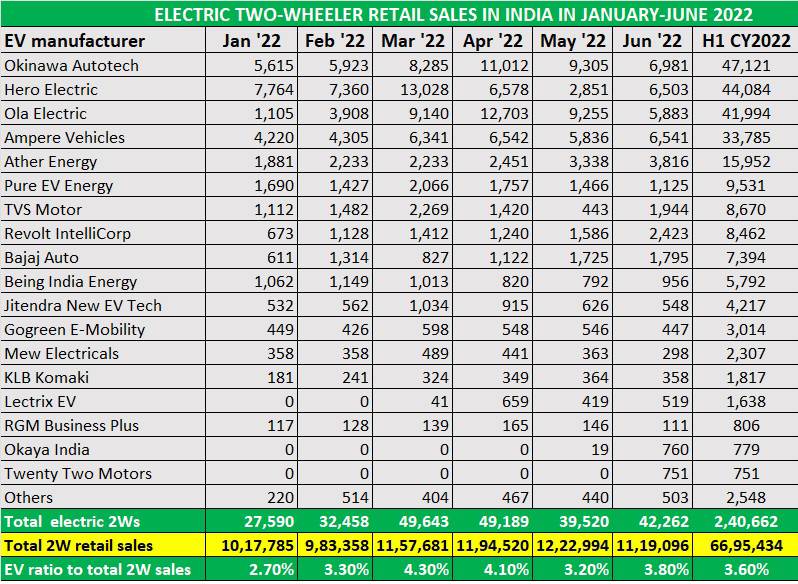 Okinawa leads but Hero not far behind
The comprehensive retail sales data table reveals that the Top 5 players have together sold 182,936 units or 76% of total e-two-wheeler in H1 2022.

At halfway stage, Okinawa Autotech is leading the EV chart of over 20 players in the fray with total sales of 47,121 units. This January-June performance has bettered the company’s CY2021 total sales of 29,945 units. The company clocked its best sales in April (11,012 units).

At No. 2 is Hero Electric – the CY2021 market leader with 46,260 units – which has seen 44,084 of its e-scooters go home to new buyers and is currently only 3,037 units behind Okinawa. It is to be noted that Hero Electric has notched the best monthly sales in H1 in March – 13,028 units. The company, which is aggressively driving expansion, currently has over 700 sales and service outlets along with a widespread charging network and trained roadside mechanics on EVs. It is also investing in expanding the EV charging network. Earlier this month, it began manufacturing and rollout of its Optima and NYX e-scooters from Mahindra Group’s plant in Pithampur, Madhya Pradesh.

In third position is Ola Electric with 41,994 units. The company saw smart sales traction, particularly in March (9,140) and April (12,703) but since then numbers have fallen to 5,883 units in June. The recent incidents of e-scooter fires have impacted Okinawa, Ola and Pure EV to some extent which can be seen in the decline in monthly numbers.

Bangalore-based Ather Energy has shown strong and consistent sales. In fact, there is month-on-month growth across the first six months of 2022. Its H1 total of 15,952 units is one e-scooter more than its CY2021 total. So, now every e-scooter that it sells July onwards is an increase over last year’s sales.

ICE majors Bajaj Auto and TVS Motor, which have diversified into e-mobility with the Chetak and iQube respectively, are clocking decent numbers. While TVS has clocked 8,670 units, Bajaj has 7,394 units to its credit.

Growth outlook
Given the demand in the segment and the pace of growth in H1, hitting the 500,000-unit sales milestone would not be impossible for the electric two-wheeler industry. Following the recent incidents of e-scooter fires with three OEMs, the government as well as the entire EV industry eco-system is hard at work to ensure top-notch battery and cell management. This is imperative because consumer confidence in electric two-wheelers, one of the low-hanging fruits of the industry along with three-wheelers, remains strong.

India is targeting EVs to account for 30% of its mobility requirements by 2030, driven by the FAME scheme, state subsidies and much increased availability of models across segments. Given the current pace of buying in the overall two-wheeler arena – 3.3 million two-wheelers sold in FY2022 – that could be still some distance away. Nonetheless, given the positive trend, as seen in the first half of the ongoing calendar year as well as Q1 FY2023, e-two-wheeler OEMs will be looking to make the most of demand coming their way.