Volkswagen continues to lead the market, as the Passat joins the Golf and Polo in the top five Ireland, Spain and Czech Republic post strongest growth in July. 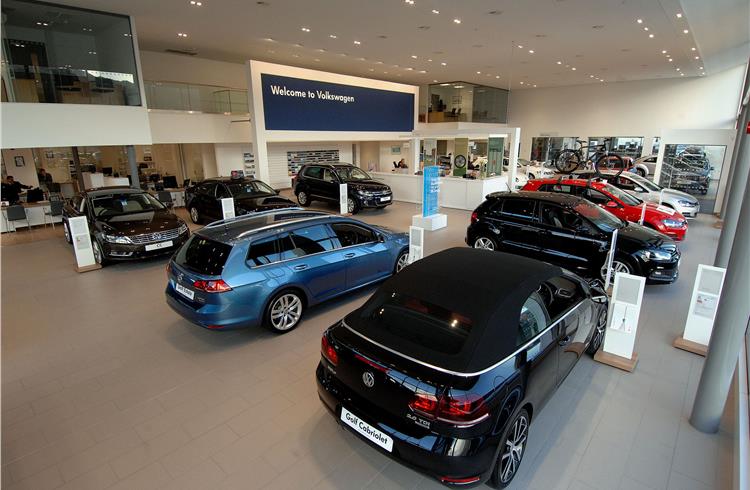 Volkswagen continues to lead the market, as the Passat joins the Golf and Polo in the top five Ireland, Spain and Czech Republic post strongest growth in July.

The European new-car market entered the second half of 2015 in good health, with total volume across the continent 9.1% higher in July than a year ago, marking 23 consecutive months of growth. Year-to-date, the market has grown by 8.6% compared to the same period a year earlier.

According to automotive intelligence provider JATO Dynamics, Ireland, Spain and the Czech Republic performed well in July, with Ireland recording a 47.6% increase in July registrations due to a strong economic recovery (registrations are up by 30.3% year-to-date) and the mid-year registration-plate change introduced in 2013 becoming more established, rivalling the longer-running January spike in purchases.

Most European markets are performing well, with 25 of the 29 included in JATO’s registration data reporting sales growth compared to 2014. Of the remaining four markets, Luxembourg is the only country to see sales fall by more than 2%.

Brian Walters, vice-president of data at JATO Dynamics, said: “The markets that suffered most at the height of the economic downturn a few years ago, such as Ireland, Spain and Portugal, are now among the fastest growing markets in Europe as consumer confidence has returned.” 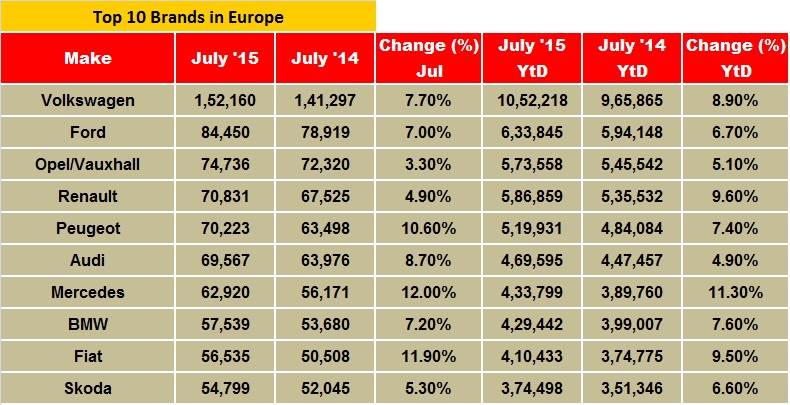 The Volkswagen brand maintained its lead of the European car market, with a 7.7% increase in volume, during July, almost matching the overall market growth, and its 8.9% year-to-date growth beating the market average.

Ford took second position in overall sales, ahead of Opel/Vauxhall, Renault and Peugeot. All of the top 10 brands have increased sales year-to-date.

Outside the top ten, Toyota and Nissan saw their July sales increase by over 5,000 units. Toyota’s new-look Yaris, latest Aygo and RAV4 models each recorded strong sales, while Nissan’s new Pulsar continued to increase sales in the mainstream C-segment. Tesla’s July sales were more than triple compared to those registered a year ago, led by sales of its all-electric Model S in Scandinavian markets, Germany and the Netherlands.

Volkswagen continued its dominance within the top ten models, with the best-selling Volkswagen Golf being joined by the brand’s recently revised Polo in second place and new Passat in fifth. The Passat recorded sales 49.9% higher than in July 2014 to move from tenth place to fifth in one month. The Ford Fiesta and Renault Clio took third and fourth places respectively.

Beyond the top ten, new and updated models such as the Skoda Fabia and Mercedes-Benz C-Class recorded significantly increased sales in July, along with more established models such as the Opel/Vauxhall Mokka (up 44.5%), Hyundai i10 (up 16.0%) and Volvo XC60 (up 34.9%). 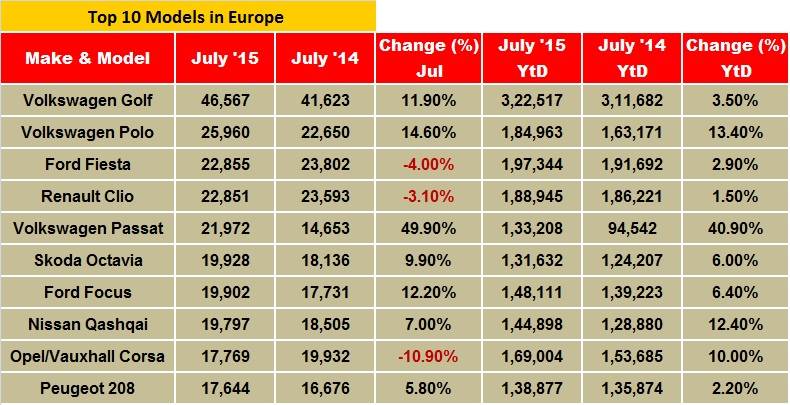