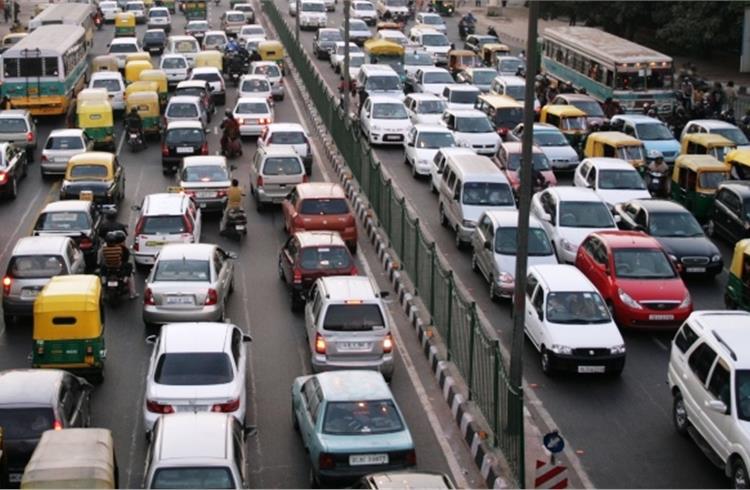 The cash crunch across the country, as a result of the demonetisation of Rs 500 and Rs 1,000 currency notes in early November, as well as the year-end impact continues to hurt the Indian automotive industry.

There is also the factor of consumers delaying purchase decisions in the last month of the year, preferring to register a vehicle in the new year.

As per the sales numbers for December 2016, revealed by industry body SIAM today, overall vehicle sales are down sharply by 18.66 percent compared to a 5.48 percent drop in November 2016. This is the second highest decline in overall sales of the auto industry since December 2000 when sales fell by 21.81 percent. The third highest dip was in December 2008 when vehicle sales were down by 18.25 percent.

While the light commercial vehicle market witnessed a slight growth of 1.15 percent, all the other segments of the industry are in the red. Some revival was seen in the last week of December in the passenger car and passenger vehicle segments where OEMs offered handsome discounts to boost sales and woo customers who were not too keen on spending money.

“Car manufacturers had an inventory of a month at the end of December though inventories of commercial vehicles and LCVs were lower. Most companies adjusted their production levels in December according to their inventories and these will have to be sold over the next three months. With BS-IV emission norms coming into force by 1 April 2017, all inventories will have to be cleared especially for trucks and two-wheelers which are still running on BS-III standards. Most of the cars are already on BS-IV norms though,” said Vishnu Mathur, director general of SIAM while announcing the results.

The annual Budget 2017-18 is expected to be a game-changer and the industry is keenly waiting for it to stimulate customer spending after putting more disposable incomes in their hands through income tax cuts and incentives for the industry.

In December 2016, the PV segment was down by 1.36 percent compared to 1.82 percent in November while passenger car sales dipped by 8.14 percent, utility vehicles (which were the saving grace) were up by 29.94 percent, and vans down by 18.76 percent. If it weren’t for the surging demand for UVs like the Maruti Vitara Brezza, Toyota Innova and Hyundai Creta, overall PV numbers would have seen a greater percent of decline.

The previous highest decline posted by the PV sector was in October 2014 when it de-grew by 7.52 percent. The highest de-growth in passenger cars earlier was in April 2014 when sales dropped by 10.15 percent.

The overall CV segment’s de-growth was limited to 5.06 percent due to a modest growth by the LCV sector with the medium and heavy commercial vehicles bearing the brunt with a fall of 12.41 percent. Among LCVs, passenger carrier sales dipped by 8.74 percent.

The highest decline was witnessed by the three-wheeler segment at 36.23 percent with both the passenger and goods carriers in the red.

Scooter sales, which have been a buffer for the overall two-wheeler sector, came a cropper recording their second highest decline in almost 15 years of 26.38 percent. The segment’s earlier highest drop was in March 2001 (-27.05 percent), followed by March 2003 (-23.32 percent).

Motorcycles deepened their slide in December by 22.50 percent. The previous low was seen in December 2008 (-23.07 percent). Importantly, with 50 percent of bike sales coming from rural India, the slowdown in that sector also contributed to the drop.

Thus, for the overall two-wheeler segment, December 2016 numbers are a shocker – a huge decline of 22 percent; the previous record low was 19 percent in December 2000. 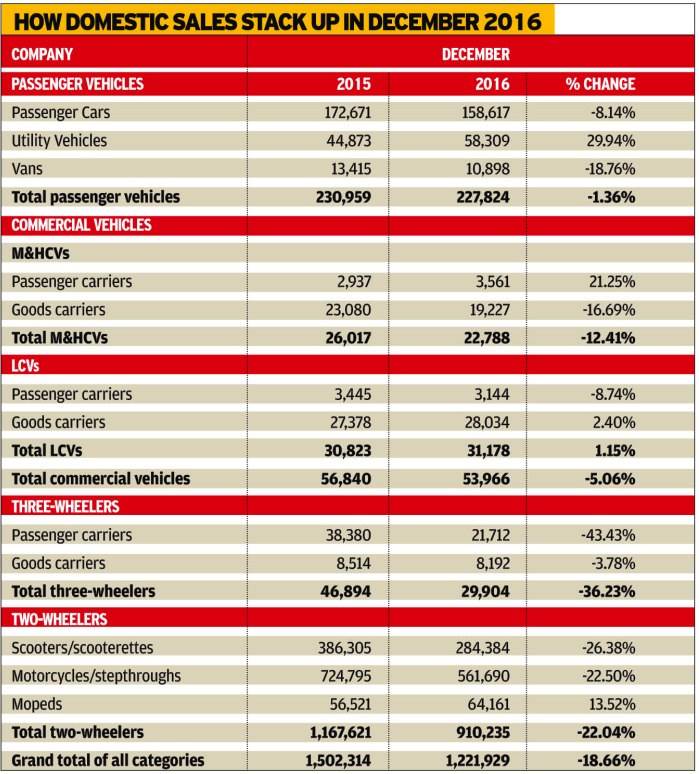 The first month of the new year is typically when sales pick up. It may not be so in January 2017 because the annual Budget 2017 has been advanced to February 1. Vehicle buyers across segments will be looking forward to the finance minister’s proposals before deciding on a purchase in the fiscal year.

Mathur says that besides the reduction in income tax rates and RBI flattening interest rates, Indian industry is optimistic that the Budget could see the announcement of a fleet modernisation policy that will generate new demand for CVs and cars. In addition, industry is also expecting various incentives to boost electric mobility to curb environmental pollution and drive sales. An extension of the FAME scheme as well as higher allocation for it would go a long way in this direction. The enforcement of GST with the right rates with lower slabs will determine the cost of ownership level of vehicles.

“The industry wants just two slabs – one for small cars and another for large cars. If small cars, two-wheelers and CVs attract a base 28 percent tax, then large cars should have the base plus an additional 8 percent tax only,” says Mathur.

During January to December, domestic PV sales rose by 7.01 percent with cars growing by a nominal 1.38 percent and UVs by 28.25 percent. CVs grew by 7.67 percent with M&HCVs up by 6.50 percent and LCVs by 8.56 percent. Three-wheelers also grew by 6.12 percent while two-wheeler sales were up by 9.70 percent with scooter sales rising by 15.06 percent and motorcycles by 6.48 percent.