The consumer shift towards petrol is gaining pace and how. While market preference for petrol PVS are jumped from 66 to 81% in April-August 2020, demand for diesel cars has slumped from 34 to 19 percent. 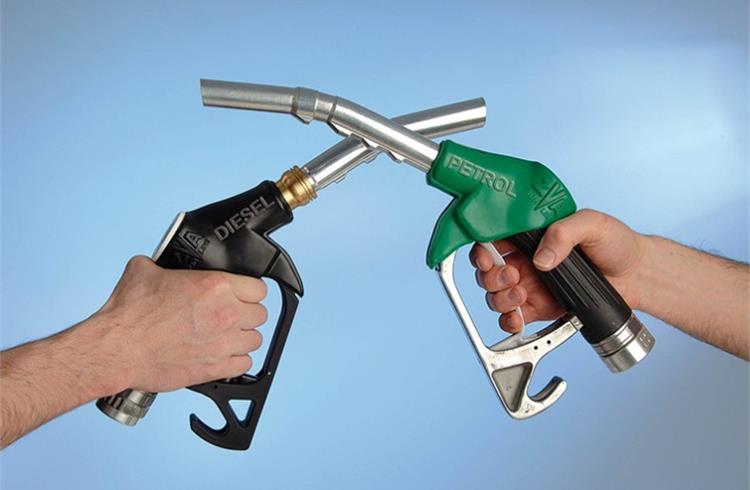 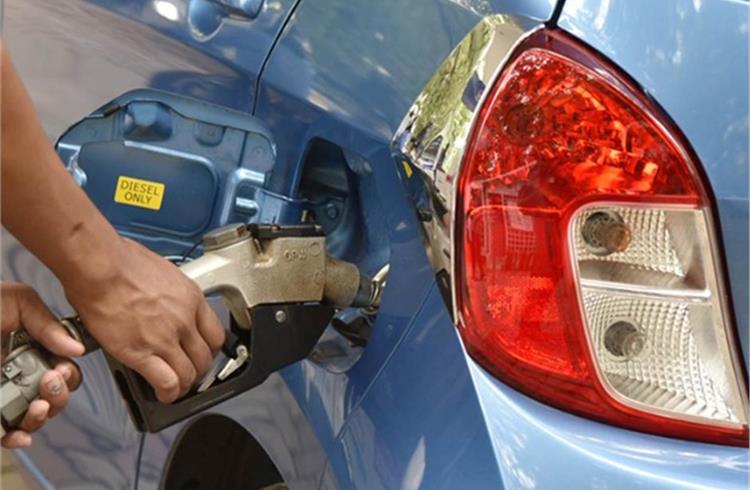 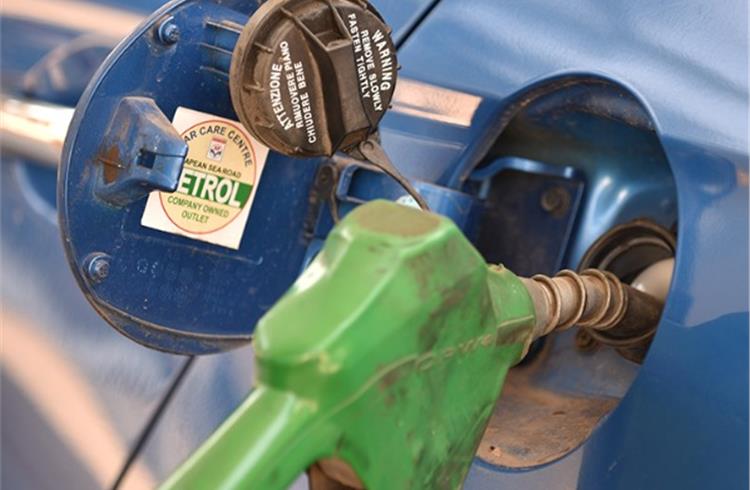 Petrol power has eclipsed diesel in the Indian market, and it's a global trend too. Be the implementation of the stringent BS VI emission norms from April 2020 that saw some carmakers to pull out of the diesel space or the fast-diminishing price differential between diesel and petrol, demand for diesel-powered vehicles has toppled in the passenger vehicle (PV) segment over the recent past in favour of petrol vehicles.

To further amplify confusion in the consumer purchase decision, rulings such as a 10-year lifetime of a diesel car in the National Capital Region compared to 15-year validity for petrol cars, as well as the higher maintenance cost of a complex BS VI diesel vehicle over its petrol counterpart, has turned many potential diesel car buyers into fence-sitters and is eventually making them opt for the safer choice of petrol, the additional mileage or the fun-to-drive torquey nature of diesel engines notwithstanding.

Moreover, in segments such as the B+ hatchback and the compact sedan space, compared to the 15 options available earlier, there are only 6 diesel choices available today. This marked shift in consumer and market demand, evident in the past few years, has come to the fore in the five-month April to August period of FY2021. Petrol-powered PVs have overturned demand for diesel vehicles with demand growing sharply from 66% in April-August 2019 to 81% in April-August 2020. In comparison, demand for diesel PVs has shrunk significantly from 34% to 19 percent. Total PV sales during this five-month period were 552,429 units (April-August 2019: 1,091,928 / -49%) in a market  badly impacted by the pandemic.

Let’s take a closer look at the key PV sub-segments to get a better overview of the situation. The April-August 2020 sales figures have also to be seen in light of the dampened market conditions in the first few months of FY2021.

PASSENGER CARS
COMPACT CARS: up to 4,000mm long,
engine displacement up to 1,400cc

This is where the meat of the market lies and it’s a fast-growing sub-segment within PVs, with a slew of offerings including B, B+ hatchbacks as well as compact sedans.

High-volume cars such as the Maruti Suzuki Swift, Baleno, Dzire, Hyundai Elite i20, Xcent, Tata Tigor and Volkswagen’s Ameo and Polo have simply vanished from having a diesel option in their offerings, thereby creating a huge void.

The equally popular Maruti Dzire compact sedan has faced an even brutal blow with diesel sales plummeting down from 32,099 units last year in favour of 28,487 petrol cars in the ongoing fiscal, albeit still de-growing at 22% due to the lock-down and dampened market conditions.

Similarly, while the Hyundai Xcent diesel has lost upon 2,207 units, diesel being the variant of choice in the Hyundai Elite i20 has lost as much as 7,459 units of diesel cars to 17,705 petrol variants (37,264 / -52%). However, the next-generation i20 is on the anvil and is expected to offer a diesel engine option as well. 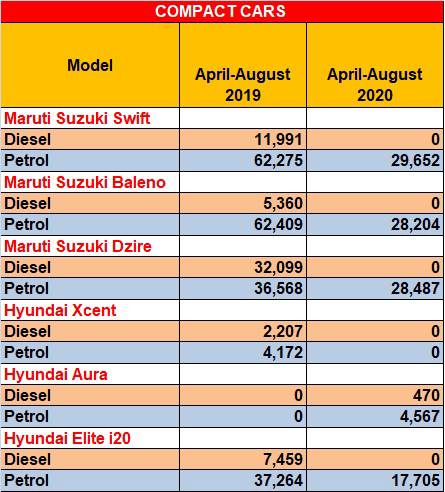 The segment includes some bestsellers like the Honda City, Hyundai Verna, Maruti Suzuki Ciaz, Volkswagen Vento and the Skoda Rapid. While Honda and Hyundai have stuck to offering diesel engines, the others have a petrol-only portfolio in the BS VI regime.

While the Honda City has been a petrol-favourite model, it, however, still lost upon 1,533 units of diesel cars between April and August 2019 to zero diesel sales even after the new generation getting launched in July continuing to offer the 1.5-litre iDTEC diesel engine. Petrol sales, in comparison, stood at 4,977 units (9,393 / -47%).

The Hyundai Verna, for which the 1.5-litre diesel is a preferred customer choice due to its automatic transmission option, saw a significant drop in demand and sold 1,819 units in April-August 2020 period compared to 5,015 units last year, thus recording a 64 percent decline. At the same time, sales of the petrol Verna were 3,502 units (6,242 / -44%). 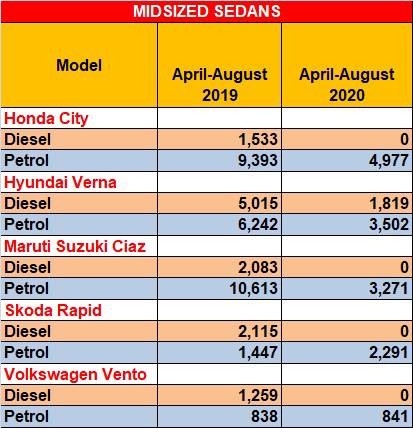 UTILITY VEHICLES
Length up to 4,000mm and priced less than Rs 20 lakh

The UV segment, which is the strongest accelerating sub-segment within the PV space having recorded an uptick of 14% even in a slow-moving PV segment in August 2020, is also instantly seeing the ramifications of the decline in diesel demand. The sub-compact crossovers, which are witnessing a huge surge in demand, are benefitting from the massive shift towards petrol crossovers.

The Honda WR-V has lost the diesel battle too from selling 3,053 units to a mere 785 units between April and August 2020, a massive 74% downfall. Petrol WR-V sales in comparison stack at 1,449 units (3,844 / -62%). Tata Motors' Nexon has also witnessed a substantial drop in diesel sales with volumes dropping from 4,787 units to 737. These have been substituted by the petrol – 2,660 units (7,865 / -66%) as well as the all-electric Nexon which went home to 266 buyers. On the other hand, the newly launched Kia Sonet is betting big on diesel with the company going as far as offering a first-in-segment diesel automatic option in its line-up too.

The Maruti Suzuki Vitara Brezza and the Hyundai Venue have seen the most significant and critical impact of plummeting demand for diesels. While the Brezza completely lost upon a significant 41,848 units of diesel variant sales to 19,824 units of the petrol-only BS VI Brezza that comes with a 1.5-litre, four-cylinder powertrain, the Venue saw a tremendous drop in diesel demand from 14,820 units to 6,238 units, a 58% YoY decline. Sale of petrol-powered Venues, however, moved to 14,134 units (19,919 / -29%). 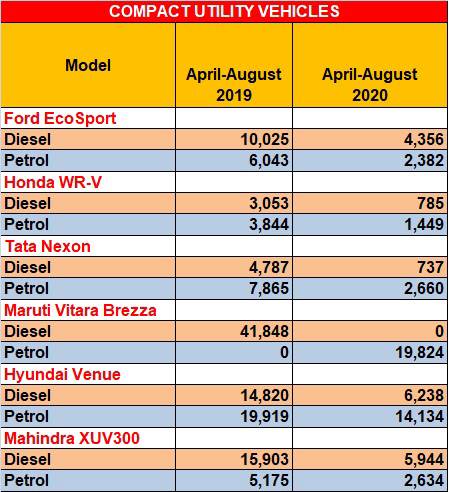 The midsized crossover segment, at present, is also one of the most popular spaces to be in the Indian PV market. Products like the Hyundai Creta, Kia Seltos, Mahindra XUV500, Maruti Ertiga, XL6 and S-Cross, MG Hector and the Tata Harrier attract a huge chunk of buyers to their respective carmaker’s showrooms, given the market’s growing affection for SUVs.

Between April and August 2020, out of the 221,251 UVs sold, these midsized UVs comprised 43% of the total volumes at 94,398 units. While the sub-segment is also seeing buyer preference shift towards petrol, it is still relatively immune to the general market trend, given these vehicles are also considered from a long-distance driving perspective.

The segment stalwart Hyundai Creta has maintained diesel sales at 20,844 units between April and August 2020, compared to the 28,071 units sold in April-August 2019, with the differential being attributed to the lack of sales in April when the new second-generation Creta was already launched but couldn’t go to customers due to the nation-wide lock-down. The SUV, however, is doing wonders for the Korean carmaker and raked in 11,758 units last month alone. Petrol-engined Cretas have also maintained their numbers at 12,882 units (12,390).

The MG Hector’s 1.4-litre turbocharged petrol variants have also witnessed sales in sync with the market trend wherein the demand for petrol SUVs grew 166% from 1,477 units to 3,935 units during the period, while the diesel recording a 64% improvement in numbers at 3,359 units, in comparison to last year’s 2,049 units. 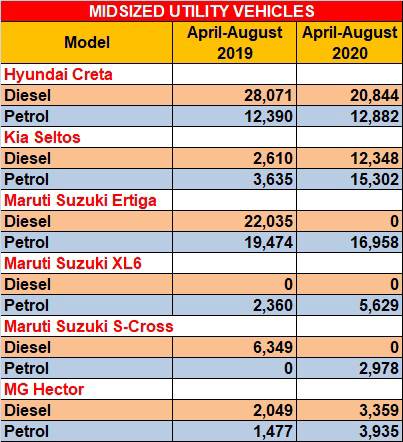 So, with the gradual onset of EVs, as well as a heightened focus on environment sustainability driving government policies and a push towards cleaner mobility that has clearly created a negative aura around diesel, the demand for mass-market oil-burning vehicles is dipping by the day. With carmakers voluntarily opting out of the segment, is there really a future for diesel cars?

Diesel has been, somewhat, a demonised fuel. Diesel engines are more economical than petrol engines, which still haven’t caught up despite advances like direct injection. Diesel engines are still far more efficient than petrol engines at converting fuel to mechanical energy. In fact, including the energy advantage of the fuel itself, diesels are up to 40% more efficient at doing that. Diesel generates less CO2 because it’s more efficient and burns less fuel. It does create more oxides of nitrogen (NOx) inside the combustion chamber but this is cleaned up by exhaust after-treatment, such as SCR (selective catalyst reduction), and the latest diesels produce extremely low amounts of NOx. And the fact is that BS VI fossil fuels are very clean.

Market reality and consumer perception of diesel though, in recent times, is having a say in vehicle sales. Take a close look at the fuel-wise vehicle sales split across the passenger car, utility vehicle and van segments and the writing is on the fuel wall. 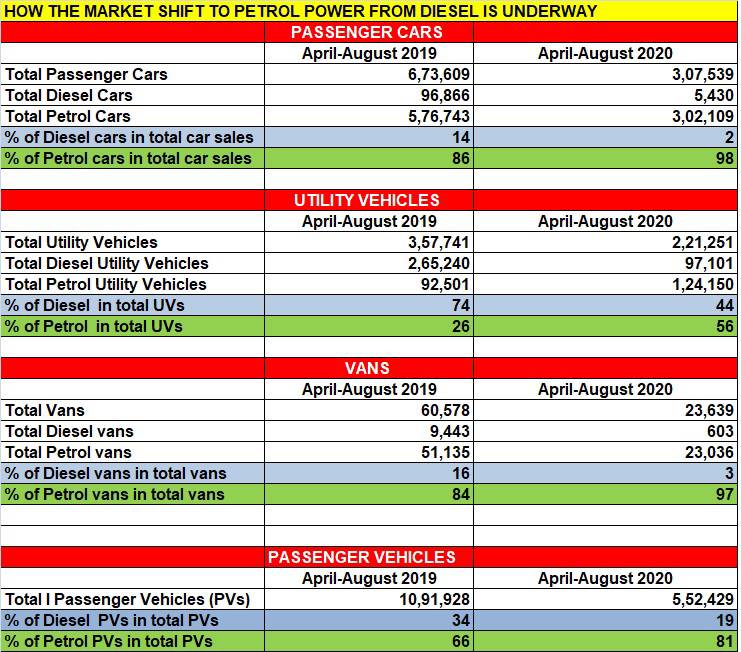