Of the carmakers which released their sales numbers for June 2015, most of either reported a year-on-year decline, flat sales or marginally improved numbers on a low sales base last June. 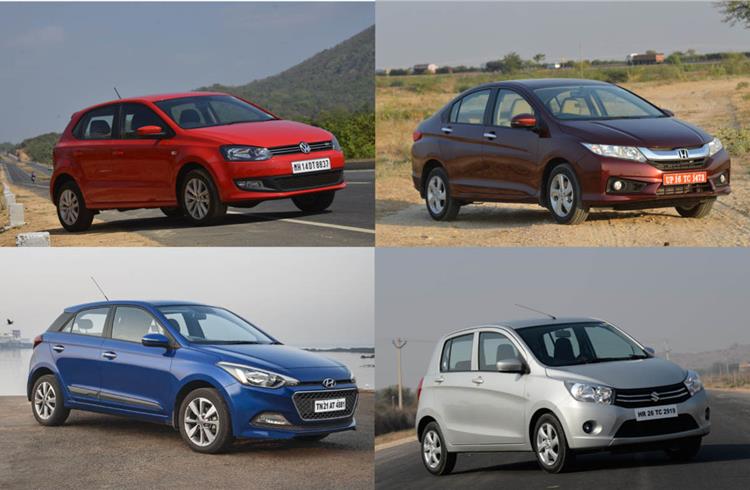 A combination of market fears of a weak monsoon this year along with slackening demand from rural India as a result of slower rural income growth is hitting passenger car sales. Of the carmakers which released their sales numbers for June 2015, most of either reported a year-on-year decline, flat sales or marginally improved numbers on a low sales base last June.

Global credit rating firm Moody’s had on June 30 picked India’s subdued rural economy as a credit negative and said the sluggish reform momentum posed “the greatest risk” to macroeconomic growth in  the country. Moody’s has said that rural growth, which was over 20% in 2011, has been stuck in the mid- to low single-digit range throughout the first six months of 2015.

The premium Ciaz sedan sold around 3,700 units, which means it has crossed cumulative sales of 45,000 units since its launch in September 2014.

Commenting on the June sales, Rakesh Srivastava, senior vice-president (Sales and Marketing), said: "In a market bearing low traction consistent demand for the Elite i20, Grand and Xcent, Hyundai’s volume grew by 8.3%. With the upcoming launch of the Creta, we are confident of sustained growth."

According to Jnaneswar Sen, senior vice-president (Marketing & Sales), Honda Cars India, “We are confident that we will continue to do well in respective segments. The new Honda Jazz will help us make further inroads in the Indian market.”

The new Camry sold 113 units last month and within two months of launch has sold over 300 units, as compared to 720 units in all of 2014. Of this the Camry hybrid constitutes 87% of total Camry sales. N Raja, director and senior vice-president, Sales and Marketing, said, “We sold 10,464 units in the domestic market last month, due to limited production on account of the planned shutdown. We currently have a waiting period of 25–30 days for the Innova and about 50–60 days for the Fortuner. It is our endeavor to make the deliveries of vehicles on a timely basis.”

Mahindra & Mahindra’s passenger vehicles segment, which manufactures and markets utility vehicles, cars and vans, sold a total of 15,880 units in June 2015, down 14.78% (June 2014 : 18,635). The company, which has a predominantly diesel-engined vehicle portfolio, is feeling the pressure of stagnating sales from rural India and also the narrowing price differential between petrol and diesel.

Pravin Shah, president and chief executive (Automotive), Mahindra & Mahindra,  “With a normal monsoon till date, an overall positive sentiment and a slew of new launches in the automotive  industry, we expect buoyancy in demand going forward. The new XUV500 has been very well received by customers.”

Volkswagen India sold 4,039 units in June 2015, an increase of 31% (June 2014: 3,079. This increase in sales is attributed to the recent launches of the new Vento and new Jetta sedans. The Polo, the only hatchback in its segment that comes with a 4-star NCAP safety rating for adult occupants, also continues to contribute to the sales increase. The company says the Polo GT TSI, with its powerful turbocharged petrol engine and 7-speed DSG transmission, is leading Volkswagen’s strong sales performance in the premium hatchback segment.

Commenting on the sales growth, Michael Mayer, director, Volkswagen Passenger Cars, Volkswagen Group Sales India, “We have witnessed our fifth consecutive increase in monthly sales and attribute this achievement to our recently launched new Vento, growing trust in the brand amongst consumers and an excellent dealer network. This has been an exciting year for Volkswagen Cars, and an increase of 19% in our overall sales for the January-June 2015 period.”

Ford India sold 4,527 cars in June 2015, down 37.63% (June 2014: 7,258). “With three new products planned in next 9 months, we will usher in excitement with the introduction of our compact sedan Figo Aspire," said Anurag Mehrotra, executive director (Marketing, Sales & Service), Ford India. 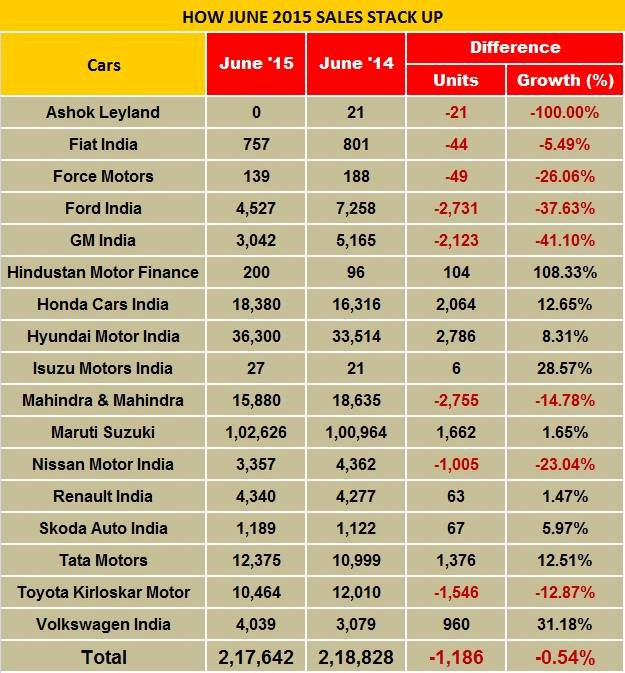 Slowed-down demand from rural markets, low sentiments and delayed purchases continue to mar overall sales of the motorcycle segment, which constitutes nearly 70 percent of the overall two-wheeler market in India. June 2015 sales results reveal that the big four – Hero MotoCorp, Honda Motorcycle & Scooter India (HMSI), Bajaj Auto and TVS Motor Company – have posted positive numbers. But the notable development is Bajaj Auto, which has finally shown a year-on-year growth after eight months. September 2014 was the last month when the Pune-based motorcycle maker had shown a YoY monthly growth of 7.14 percent. Among other OEMs, Yamaha and Suzuki continue to improve on their monthly numbers.

Posting flat growth of 0.14 percent in June 2015, the largest two-wheeler seller, Hero MotoCorp sold 542,362 units (June 2014: 541,594). An official communication states “As the industry had built up stocks due to the sluggish market, HMCL reduced inventories in Q1. The company’s retails are currently better than dispatches,” which means that Hero has been working on reducing its accumulated stock at the dealership as well as the factory level.

Hero rolled out two models – Passion Pro and Xtreme Sports – recently to boost its regional sales in the motorcycle portfolio. While the company has planned a number of launches during the next four-five months, it is also looking at adding a few new export destinations this fiscal.

Honda Motorcycle & Scooter India has shown decent domestic growth of 7.24 percent during June 2015, but this has come on the back of its rising scooter sales year-on-year. The company, which had sold 309,374 units in June last year, sold an overall 331,782 units last month.

The company, which has recently rolled out the 2015 editions of its Activa and Aviator scooter models, is increasingly focusing on making India its largest contributor to its global sales.

At the launch event recently, Keita Muramatsu, president and CEO, HMSI and Honda Motor India, said: “India is a focus market for Honda and it is significant that Honda’s two-wheeler operations in India is the second largest contributor to Honda’s global sales. Today, one in every four two-wheelers sold by Honda worldwide is from India. I am confident that given our continued investment and growth, we will become No. 1 two-wheeler market for Honda globally within the next 2-3 years. Honda’s future growth in India will be co-driven by its scooter portfolio. Honda dominates this segment with every second scooter being sold today in India being a Honda. At the same time, Honda is expanding its production capacity foreseeing the future potential of automatic scooter demand. Our upcoming fourth plant will be the world’s largest only scooter plant and will start operation at Gujarat in early 2016.”

Bajaj Auto, which is now witnessing the results of its multiple launches in the early months of this calendar year, registered total sales of 287,582 units (including exports) during June 2015, up 9.68 percent (June 2014: 262,202). This is thanks to the sales of its CT commuter model, which is seeing a surge in demand.

Banking on the growth of its scooter models, India Yamaha Motor registered total domestic sales of 51,432 units in June 2015, up by 26.47 percent (June 2014: 40,666). “The numbers are a sign of Yamaha’s robust business plan and strategic customer engagement programs. We witnessed brisk growth due to our robust product line-up and new launches during the year so far. Our new Fascino scooter and 125cc Yamaha Saluto have been key to boosting our sales. Also, the new range of Alpha, Ray and Ray Z scooters with Yamaha’s next- generation ‘Blue Core’ engine concept continues to be a fundamental growth driver for us,” said Roy Kurian, vice-president – Sales & Marketing, Yamaha Motor India Sales.

Suzuki Motorcycle India sold 32,628 units, 31.50 percent up (June 2014: 24,812). Atul Gupta, executive vice-president, SMIPL, said: “Several factors have come together to propel us onto a consistent growth path. This is because of Suzuki’s marketing efforts and also the perceived upswing in consumer mood. The aggressive marketing initiatives for the Gixxer have generated a lot of excitement and interest in Suzuki’s flagship product.” 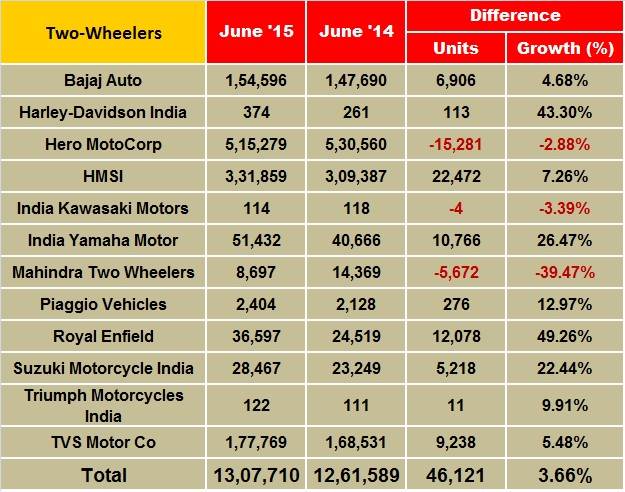 India M&HCV sales rev up in June, above 1-tonne LCVs do better

In what can be termed as positive news for the commercial vehicle segment, growth is gradually filtering down from the M&HCV market (which has seen continuous growth for the past 10 months) to the light commercial vehicle (LCV) segment.

Heavy and medium commercial vehicle (M&HCV) sales are continuing their strong run with all the OEMs recording higher sales month on month. Last month, Roland Berger Strategy Consultants had highlighted that the M&HCV segment in India is seeing a clear trend of demand for heavy vehicles, especially 25T and 31T trucks. While 2014-15 saw the 25T segment record 15 percent YoY growth, customers are now preferring higher-tonnage vehicles like 31T vehicles, which saw 53 percent YoY growth in the last fiscal. The firm expects that the small commercial vehicles segment will follow the trend in the M&HCV segment and will turn positive in next 6-8 months.

Sales in the above 1-tonne payload LCV segment are gradually increasing performing and Ashok Leyland continues to record double-digit growth in sales of its Dost. However, sales of small CVs of less than 1-tonne payload remain stuck in the slow lane mainly due to a slowdown in rural India growth as a result of a below-than-normal monsoon. Both Tata Motors and Mahindra & Mahindra saw negative sales in the category albeit M&M is seeing better sales for its pick-ups. 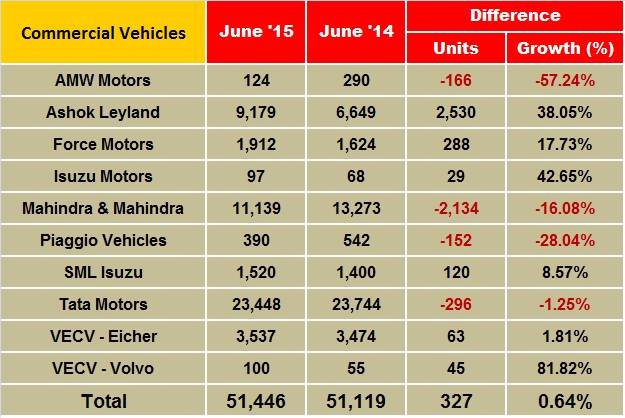