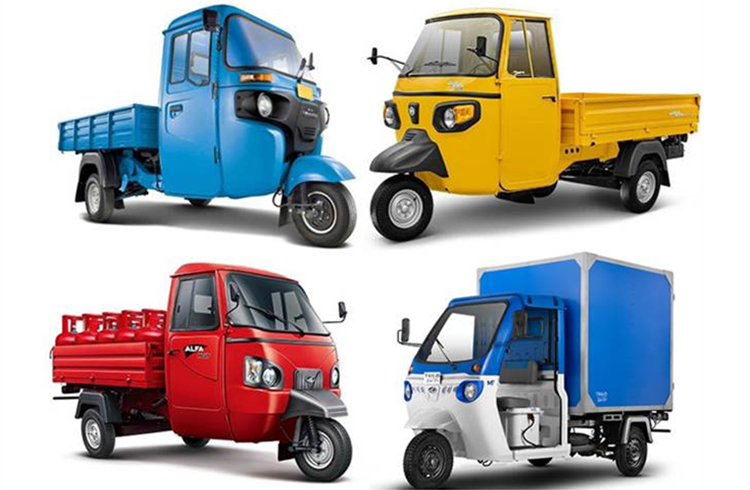 Of the nearly 11 million (1,09,88,305 units) overall sales at India Auto Inc in the first six months of FY2023, three-wheelers accounted for 196,612 units or just a 1.78% share but this vehicle segment is seeing growing demand, particularly in view of the shift towards electric mobility and lower cost of ownership. The three-wheeler segment is split into passenger-carrying and goods-transporting vehicles.

The boom in e-commerce and last-mile deliveries is having a positive impact on demand for goods-carrying three-wheelers, particularly those needed for urban operations. Easily manoeuvrable, they can navigate tight roads and also enter locations where four-wheelers would fear to tread. It also helps that the newer models of three-wheelers are designed and/or customised to handle such duties. And the demand is coming from logistics operators too.

Bajaj Auto, which took leadership of the three-wheeler goods carrier segment in October 2021, has maintained its numero uno status. With sales of 15,897 Maximas, the company has posted 29% YoY growth (H1 FY2022: 12,347 units) albeit its market share has reduced marginally to 37% from 38.50% a year ago. Clearly, the market shift to cheaper CNG (Rs 86 a kg in Mumbai) from the more expensive diesel (Rs 94.27 a litre) is benefitting the Bajaj Maxima.

Erstwhile leader Piaggio Vehicles though has made a strong comeback with 14,503 units, up 34% YoY and a market share of 33.73%. It is currently 1,394 units behind Bajaj Auto but expect the battle between the top two players to become more intense in the coming months. Piaggio, which has options of CNG, diesel and electric for its goods carriers,

Third-placed Mahindra & Mahindra sold 7,007 units in H1 FY2023, up 37%. The company has three models in the goods carrier market – the diesel-engined Alfa, the electric Treo and the Zor Grand, launched on August 30, 2022, priced at Rs 360,000 (ex-showroom Bangalore). Expect the company to achieve greater traction in the coming months.

Mahindra Electric claims the Grand Zor, which has a 100km range on a single charge, has best-in-industry performance for an electric cargo three-wheeler – 12 kW – as also best-in industry gradeability of 11.5 degrees, which makes climbing slopes with load easier. The e-three-wheeler also develops 50 Nm torque. As per the company, a Grand Zor user can save up to Rs 600,000 in ownership costs over a five-year period when compared to a diesel-engined cargo three-wheeler and up to Rs 300,000, versus a CNG cargo three-wheeler.

At halfway stage in FY2023, the three-wheeler goods carrier industry has already clocked 55% of FY2022’s 77,388-unit sales and 51% of FY2021’s 84,032 units. With sustained demand for transport of small goods across India over the coming six months, there is ample reason to believe this vehicle sub-segment is, like other segments, headed for record sales in the ongoing fiscal.