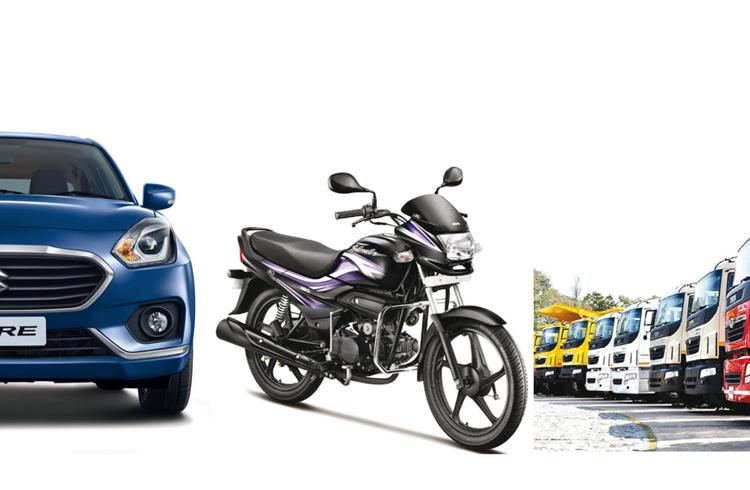 The Federation of Automobile Dealers Associations (FADA) today released vehicle registration data for December 2018 and April-December 2018. Retail sales in the last month of the year 2018 saw the overall (two-wheelers, three-wheelers, commercial vehicles and passenger vehicles) sales at 1,442,514 units, are down by 16 percent compared to 1,707,820 vehicles sold in November 2018 but compared to the same period in 2017, retail sales have grown by 9 percent.

According to the data released by the apex automobile dealership body, sales of two-wheelers in India in December 2018 were, at 1,141,209 units, are down sharply by 18 percent (November 2018: 1,383,572) month on month; in the YoY comparison though, sales have increased by 11 percent.

As regards sales of passenger vehicles, FADA says December 2018 saw 202,585 units being sold, a negative growth of 7 percent compared to November 2018, and 3 percent down compared to the same period a year ago.

According to FADA, the vehicle registration data has been collated in collaboration with the Ministry of Road Transport & Highways and gathered from 1,072 out of 1,431 RTOs.

Commenting on the data, FADA president Ashish Harsharaj Kale said, “We are seeing initial signs of revival in the industry as compared to the recent festival season. Passenger vehicle sales have arrested further de-growth as good retail momentum in the past 15 days indicates sentiment turning positive. Two-wheelers show positive growth on a YoY basis although the MoM trend shows a decline.”

According to FADA, fuel prices have fallen to their lowest levels in the last three months. Although liquidity continued to be a major constraint in December, a number of initiatives seem to be on the table by policy makers towards easing the overall situation, the positive effects of which will be felt in this quarter (Q4 FY2019). The NBFC liquidity, which directly impacts the auto industry, is also getting due attention and we are hopeful that positive measures will be taken in the meeting of the RBI Governor with all the NBFCs today, further helping in improving the consumer sentiment.”

According to the dealer body, there was moderation in wholesale billings in December 2018 and some reasonably good retail sales in end-December, which has helped in reducing the extremely high PV inventory to reasonable levels in many markets. FADA expects the continued efforts in the right direction by all OEMs in the PV segment will help bring down the existing inventory levels to normal across all markets in India by end-January 2018.

FADA says CV inventory reduced slightly in December 2018 but still continues to be above normal. However, with continued OEM efforts of calibrated dealer billing, coupled with a similar trend of strong retails as in the PV segment, will ensure a return to normal dealer stock levels in January 2019. The dealer body adds that it would like to highlight that the inventory levels of two-wheeler dealers still continues to be “very high” and hopes that similar positive steps, as taken by the PV OEMs, are being taken by the two-wheeler manufacturers and wholesale billings in January 2019 will be moderated, as per the month’s retail situation.

2W inventory continues to be highest at 55 days
As per the findings of a survey conducted by FADA among its members, the current inventory of PVs lies in the range of 35-40 days, for two-wheelers it is 55-60 days and for CVs, it ranges from 35-40 days.

Commenting on the new initiative of releasing vehicle registration data by FADA, Kale said, “Starting this month, FADA will release vehicle registration data on a monthly basis between the 7th and 10th of every month. We are releasing comparison data for 2Ws and PVs on a YoY and MoM comparison basis and plan to release similar comparisons for all categories April onwards. We hope that it will act as a barometer for the industry as well as for the policy makers and help understand the on-the-ground situation of auto sales, in turn helping frame future actions and policies. This will not only help us but also all the stakeholders of the industry in planning the business in a much more competent way and help balance inventory levels and act as a driver to make changes in business as deemed necessary.”

“Customer interest is still healthy, indicating sales will come back in their previous growth trajectory sooner rather than later. As predicted during the festival season data release, healthy customer inquiry level, coupled with stakeholders of the industry coming together and moving ahead in a cohesive manner, the auto industry will once again clock real growth close to double digits by the end of this financial year,” concluded Kale.