Reflecting the improvement in the economy, all vehicle segments saw robust sales in January. While UVs led the charge in PVs, scooters notched 48 percent YoY growth even as CVs seem to be firmly accelerating in growth lane. 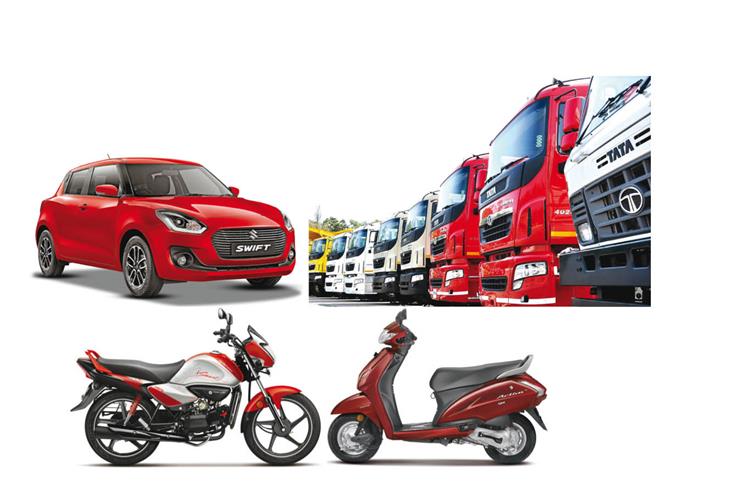 The Indian automobile sector, which has been driving in growth lane consistently for some time now, has opened 2018 on a robust note, with all vehicle categories reporting strong sales in January. Industry is certainly seeing happy days, with FY2018 pegged to be the first fiscal after a gap of five years since FY2013 (+2.49%), to be posting solid double-digit growth amidst a slew of economic reforms and regulatory changes being introduced in the first half of fiscal year FY2018. 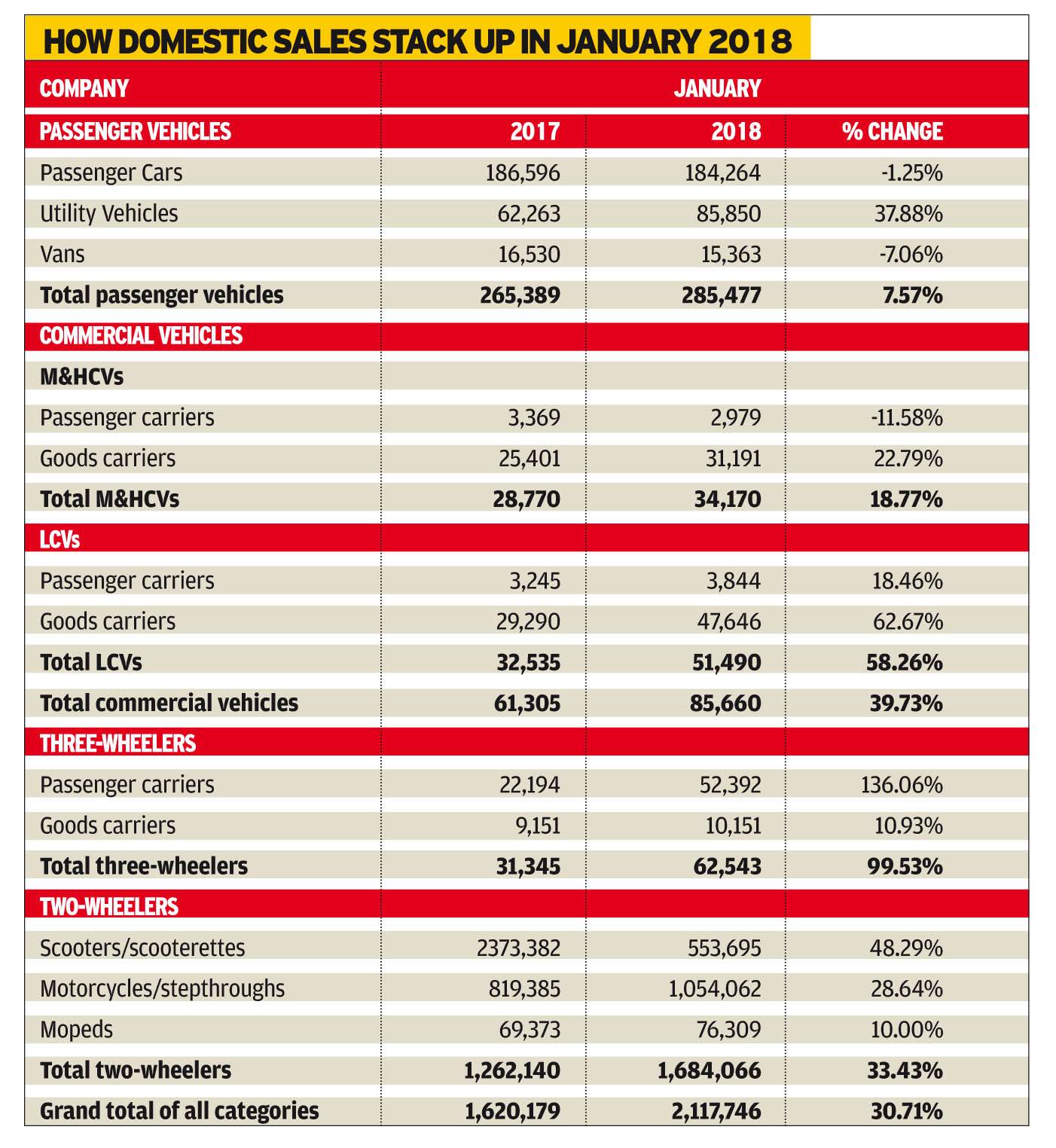 Utility vehicles, including compact crossovers, which remain the new favourite of car buyers within the passenger vehicle space, posted an astounding performance, selling 85,850 units and growing by a substantial 38 percent, year on year, in January. Over a duration of 10 months between April 2017 and January 2018, sale of passenger vehicles grew by 8.07 percent with 2,711,930 units (April-January 2017: 2,509,401), with UVs clocking 750,080 cumulative units (+21.29%) and overshadowing passenger cars, which grew by 3.61 percent, selling 1,803,746 units. “The line between UVs and passenger cars is slowly diminishing with the coming in of crossovers, which don’t necessarily need all that off-road ability. Both sub-segments are now seeing overlapping and we could see the pattern to follow in the future as well,” said Sugato Sen, deputy director general, SIAM. The sub-segment certainly has become the default choice for carmakers to bring in their new models and a slew of concept unveils at the Auto Expo is a testament to the strong consumer liking for such vehicles.

Hyundai Motor India registered total domestic sales of 45,508 units (January 2017: 42,017), up 8.3 percent. The company has been seeing consistent demand for its new Verna sedan, launched in August last year. The car has cumulatively sold 28,251 units within five months until January 2018. The i20 hatchback and the Creta crossover continue to be strong buyer considerations.

Tata Motors clocked domestic PV sales of 21,872 units (January 2017: 14,721), which marks significant 49 percent0 growth. What boosted sales is demand for the Nexon compact SUV, which has emerged a strong driver in in the voluminous sub-Rs 10 lakh UV segment. Driven primarily by the Nexon, Tata’s UV sales grew by 188 percent, and the sales of its passenger cars, driven by the Tiago hatchback, registered a 27 percent growth in the month. 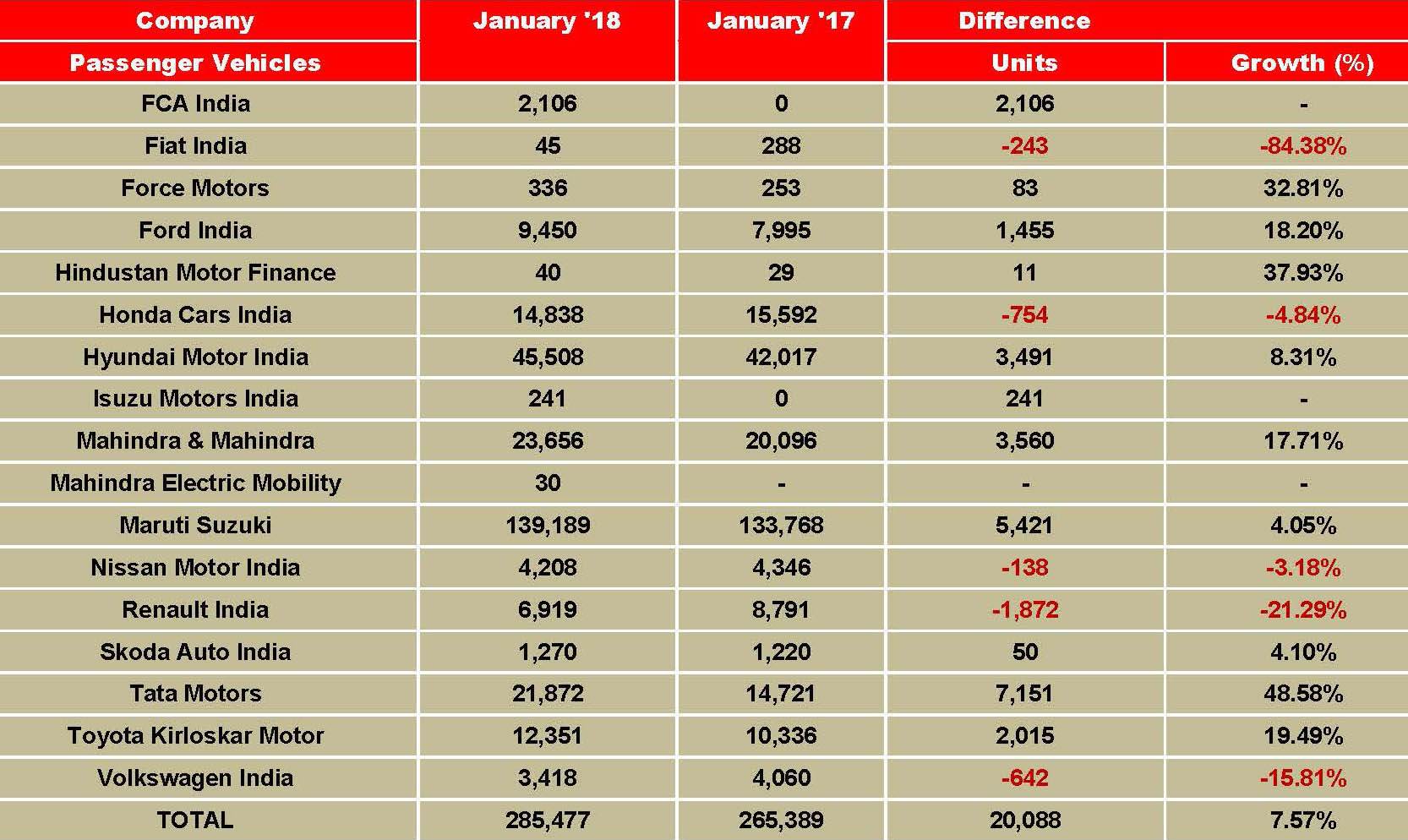 TWO-WHEELER OEMS ON A HIGH
The two-wheeler industry recorded impressive YoY growth of 33.43 percent in January 2018 at 1,684,066 units. While scooters recorded the fastest growth of more than 48 percent YoY, motorcycle sales grew by 28.64 percent YoY.

Growth for Hero MotoCorp, which sold 619,387 units in January 2018 (+31.30%), was partly fuelled by the sharp rise in its scooter dispatches (about 118 percent) and partly by the 20 percent YoY growth recorded by its 100cc-110cc motorcycles.Picking up some action lately, the Pawan Munjal-led company has unveiled a number of facelifts, new models and concepts in the past few months. .

Honda sold 488,855 units, up 32.85 percent. Of this, while scooter sales comprise strong volumes of 319,318 units (65 percent of overall sales), motorcycle sales contributed the remaining 1,69,537 units. The company, which has found initial success in its recently launched 125cc Grazia scooter, has updated its prime product – the 109cc Activa 4G with a new model under the Activa 5G moniker. It has also unveiled its fourth motorcycle in the 150cc-160cc category where it has tasted runaway success in the last few years at the 2018 Auto Expo - the X-Blade, which is expected to hit showrooms in March.

Bajaj Auto recorded sales of 1,63,111 motorcycles in January thereby registering a YoY growth of 36.15 percent. Pumping new life in its Discover brand, the company has recently rolled out the Discover 110 and Discover 125. The company has equipped the new Discover models with newer features that include LED DRLs, longer travel (front) suspension units and other cosmetic additions. Along with that the company has also updated its V series and the Avenger line up with 2018 editions. While this is aimed at boosting sales at one end, these updates keep the model at / above par with the incoming competition.

Suzuki Motorcycle India sold 45,287 units in January 2018, up by 42 percent YoY. It has recently unveiled three models at the 2018 Auto Expo which included the naked street midsize GSX-S750 (powered by 750cc, four-cylinder, liquid-cooled engine) and the Access 125-based Burgman Street scooter (125cc).

In the big bike segment, Harley-Davidson continues to rule the roost. But with sales of of 207 units in January, it was down by 25.27 percent YoY. Japanese big bikemaker Kawasaki, on the other hand, sold 172 units last month, recording a massive jump of over 300 percent YoY. British motorcycle brand, Triumph Motorcycles India sold 90 units in January 2018, up by a decent 14 percent YoY.

The big bike companies are estimated to get the benefits of the reduced custom duty to 50 percent (on now all CBUs) from 60 percent (800cc and smaller CBUs) and 75 percent (bigger than 800cc CBUs) respectively. The duty relief to these premium bike makers comes as good news as the market continues to mature year-on-year.

With over 24 launches and 106 unveilings done at Auto Expo 2018, the automotive space is buzzing with some brisk action right now and is expected to see more customer footfalls in showrooms, as well as even more anticipation for some of the promising concepts showcased for the future

COMMERCIAL VEHICLES SEE ROBUST GROWTH
Commercial vehicle sales stayed firmly in growth lane positive in the first month of 2018 but there is an indication of growth moderating. After witnessing growth of over 50 percent in November and December 2017, CV majors Tata Motors and Ashok Leyland settled down at 38 and 22 percent respectively in January 2018.

As economic activities start improving on the back of a strong focus on infrastructure development, industry analysts anticipate Q4 FY 2017-18 to be a positive one for the CV sector. 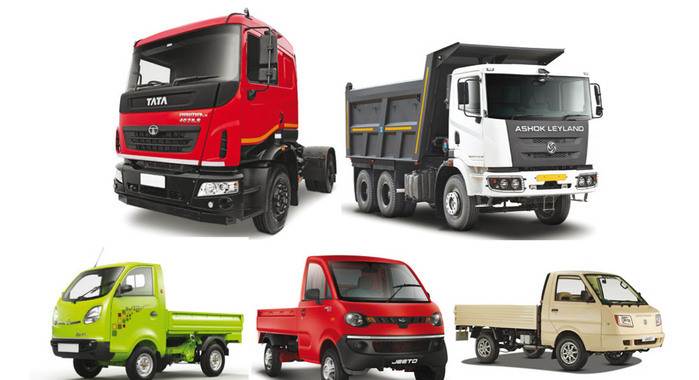 The key drivers for the uptick in M&HCV sales can be attributed to stricter enforcement of overloading laws across the country, which has resulted in fleet operators preferring rated loads; this has also helped in driving demand for higher-tonnage trucks. Additionally, with GST, productivity of trucks has also improved significantly, in turn enabling M&HCV sales to remain in the fast lane. Fleet operators have been looking optimising operational costs with higher-tonnage trucks. With higher productivity, better turnaround time, optimium utilisation of trucks has gone up significantly, thereby benefitting fleet operators.

Tata Motors sold 39,386 units compared to 28,521 units in January 2017, an increase of 38 percent YoY. After witnessing robust growth over the last three months, its M&HCV sales moderated at 12,804 units, up 13 percent. The I&LCV truck segment grew by 55 percent YoY, on the back of an increased thrust in agriculture, FMCG and e-commerce sectors. The company also registered increasing demand for container and refrigerated trucks in I&LCV segment.

According to Tata Motors, “The demand for M&HCV trucks was led by increasing restrictions on overloading, fresh tenders in the car carrier and petroleum sectors as well as coal and cement movement triggered by key infrastructure projects. However, the growth was lower than expected owing to challenges arising out of supply constraints on key parts.”