The no-holds-barred battle between the best-selling Hero and Honda products continues unabated, even as demand returns in a robust manner for motorcycles. 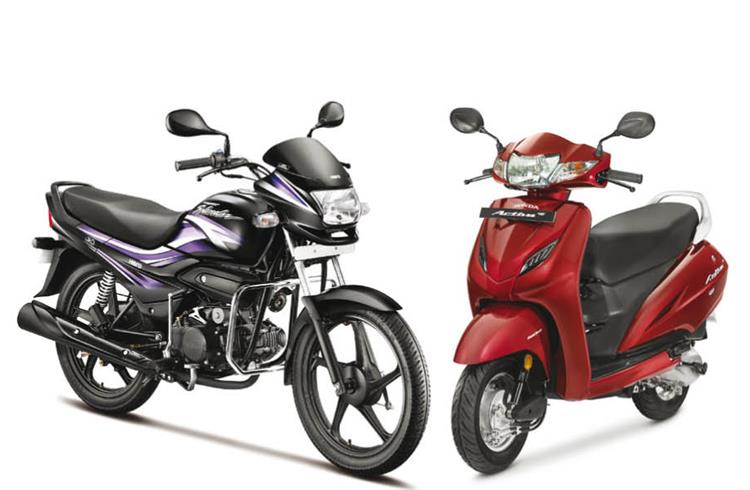 The Hero Splendor and the Honda Activa continue to fight it out for the top spot in the world’s largest two-wheeler market. Their domestic numbers over the past three months prove this point yet again. While March 2018 saw the Hero Splendor race ahead of the Honda Activa, the latter outsold the former with a wide margin in April 2018.

Now in May, Hero MotoCorp’s staple brand – Splendor – has once again beaten Honda’s most popular Activa brand of scooters in the booming domestic market. Growing by 19.05 percent YoY in its monthly volumes, the Hero Splendor has sold 280,763 units last month. Meanwhile, Honda, which saw a decline in its scooter sales last month, has reported sales of 272,475 units (down 3.54 percent YoY) under its Activa umbrella last month.

The difference, as seen, is a meagre 8,288 units between the sales volumes of the two top-selling two-wheeler brands in India. This clearly indicates that the two might reverse positions in the top 10 list in June 2018.

At No. 4 is Honda’s CB Shine, the country’s bestselling 125cc motorcycle, with sales of 99,812 units, up 15.26 percent YoY. Closely following the Honda CB Shine is Hero’s yet another mass commuter motorcycle brand – Passion – which sold 96,389 units last month and recorded YoY growth of 7.82 percent.

TVS Motor’s XL Super remains the sixth bestselling two-wheeler in the domestic market with sales of 73,067 units in May 2018. The moped, which has seen its engine evolve from a two-stroke, 70cc to a four-stroke, air-cooled, 100cc powertrain, remains one of the most preferred pocket-friendly two-wheelers in India. However, in May 2018 it has reported flat YoY growth of 4 percent.

Bajaj Auto’s Pulsar and CT100 range rank eighth and ninth respectively in the Top 10 best-sellers list of two-wheelers. While the Pulsar brand has fetched sales of 70,056 units (up 40 percent YoY) for the company, the CT100 reported sales of 64,622 units last month (up 65.92 percent YoY). Notably, the Pulsar still is the largest selling brand of motorcycles for Bajaj Auto.

TVS Motor’s 110cc scooter Jupiter – the only other scooter apart from the popular Honda Activa that has consistently marked its presence in the coveted list –ranks tenth with sales of 58,098 units in May 2018. The Jupiter, which is also the second largest selling two-wheeler model from TVS Motor’s stable, has recorded flat growth of 1.80 percent YoY.

With a good monsoon season ahead, the industry remains bullish about the market demand in the coming months. This is bound to positively impact the two-wheeler demand across the states in India.