Two-wheeler OEMs on a high in January 2018

With sales of 1,684,066 units and year-on-year growth of 33 percent, the two-wheeler market is on fire. While growth has returned to the motorcycle segment, scooters are taking off on their own trajectory, notching 48 percent YoY growth.

The Indian two-wheeler industry recorded impressive YoY growth of 33.43 percent in January 2018 at 1,684,066 units. Harley-Davidson India and Mahindra Two Wheelers were the only two OEMs that failed to report a positive growth. While scooters recorded the fastest growth of more than 48 percent YoY, motorcycle sales grew by 28.64 percent YoY. Meanwhile, the mopeds, category wherein TVS Motor Company commands a monopoly in the domestic market, saw YoY growth of 10 percent.

Picking up some action lately, the Pawan Munjal-led company has unveiled a number of facelifts, new models and concepts in the past few months. This includes the Super Splendor, which borrows the 125cc engine from Glamour, the 110cc Passion Pro and XPro, the production-ready Xtreme 200R, 125cc Duet and Maestro scooters and the adventure bike concept XPulse 200, among other low profile product launches.

Honda Motorcycle & Scooter India sold 488,855 units, up 32.85 percent. Of this, while scooter sales comprise strong volumes of 319,318 units (65 percent of overall sales), motorcycle sales contributed the remaining 169,537 units. The company, which has found initial success in its recently launched 125cc Grazia scooter, has updated its prime product – the 109cc Activa 4G – with a new model under the Activa 5G moniker. It has also unveiled its fourth motorcycle in the 150cc-160cc category where it has tasted runaway success in the last few years at the 2018 Auto Expo. Honda unveiled the X-Blade, which borrows its 160cc powertrain from the CB Unicorn and CB Hornet 160R, targeting young urban buyers. Notably, the X-Blade is Honda’s tenth model in its commuter motorcycle portfolio. It is expected to hit the showrooms in March.

Bajaj Auto recorded sales of 163,111 motorcycles in January, thereby registering YoY growth of 36.15 percent. Pumping new life in its Discover brand, the company recently rolled out Discover 110 and Discover 125. The company has equipped the new Discover models with newer features that include LED DRLs, longer travel (front) suspension units and other cosmetic additions. Along with that, the company has also updated its V series and the Avenger line-up with 2018 editions. While this is aimed at boosting sales at one end, these updates keep the model at / above par with the incoming competition.

To keep up the sales of its premium offerings, the company has recently added new colour options to its Pulsar RS200 and the Dominar.

Bajaj Auto also offered one-year free insurance scheme on a number of its models that included Platina, Discover, Pulsar, V and Avenger range. Although it is learnt that the scheme is now no more available, it is estimated that it has helped the company push its sales at the retail level.

Royal Enfield, which has become India’s fifth largest bikemaker surpassing India Yamaha Motor, has reported sales of 76,205 units in January 2018. It grew by 31 percent YoY last month. The company’s projections for the market demand in the domestic as well as international markets remain bullish as it prepares to bring its most premium 650cc, twin-cylinder motorcycles – Interceptor 650 and Continental GT 650 later this year.

Meanwhile, Suzuki Motorcycle India has reported sales of 45,287 units in January 2018, up by 42 percent YoY. It has recently unveiled three models at the 2018 Auto Expo which included the naked street midsize GSX-S750 (powered by 750cc, four-cylinder, liquid-cooled engine) and the Access 125-based Burgman Street scooter (125cc). According to company officials, SMIL’s clear strategy for growth in India market is to stick to the premium and performance segments. Notably, India is the fastest growing market for Suzuki’s global two-wheeler business.

In the big bike segment, among the companies that report their monthly sales to apex industry body SIAM, Harley-Davidson continues to rule the roost. The iconic American motorcycle brand reported sales of 207 units in January, down by 25.27 percent YoY. Japanese big bikemaker Kawasaki, on the other hand, has sold 172 units last month, recording a massive jump of over 300 percent YoY.

The big bike companies are estimated to benefit from the reduced custom duty to 50 percent (on now all CBUs) from 60 percent (800cc and smaller CBUs) and 75 percent (bigger than 800cc CBUs) respectively. The duty relief to these premium bike makers comes as good news as the market continues to mature year-on-year. 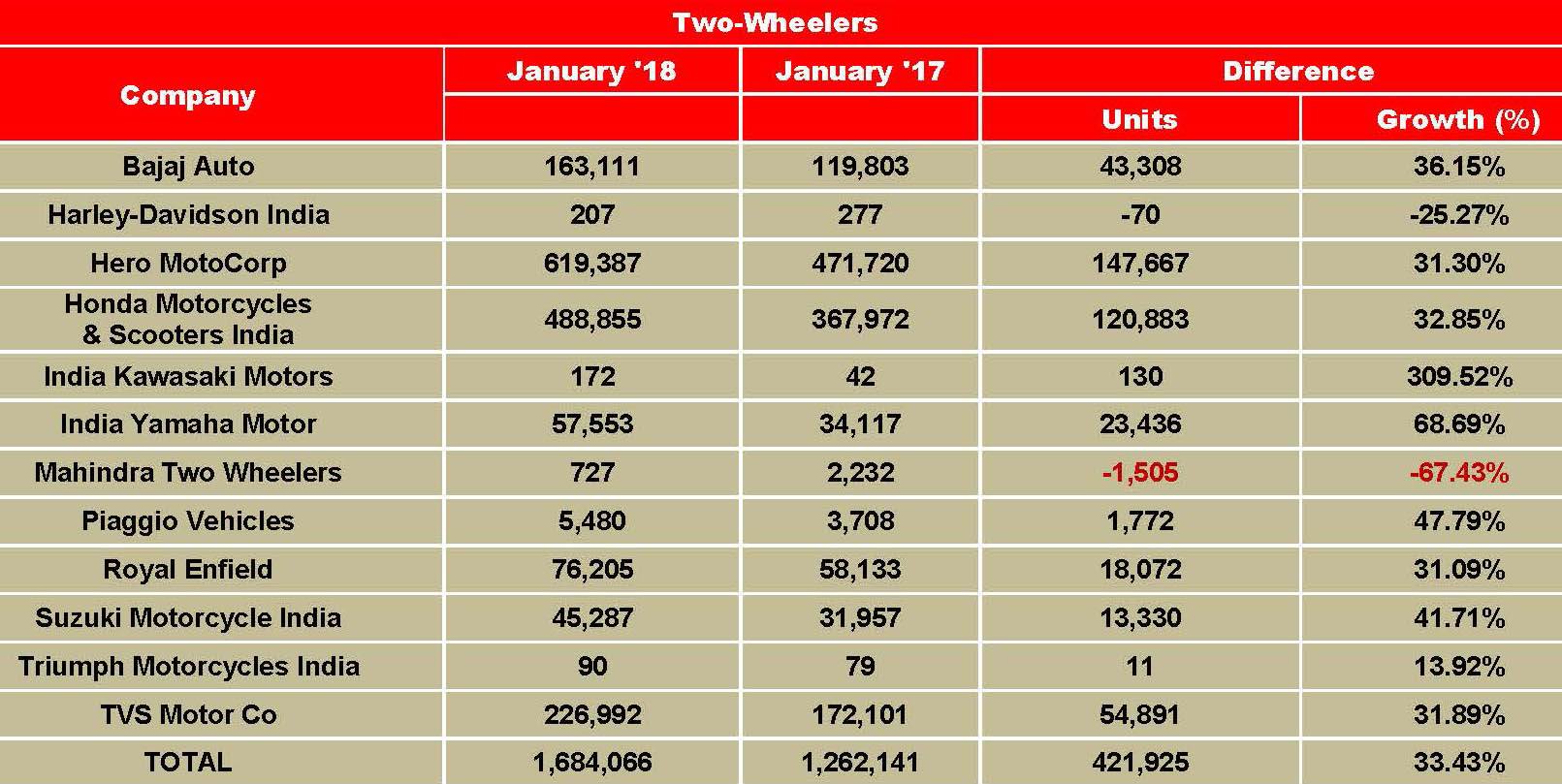 Also read: 2018 opens on a strong note for Indian OEMs