Heavy discounting in March 2017 to clear BS III stock, a price hike for BS IV-compliant trucks from April 1 and delayed purchase decisions have resulted in a marked fall in monthly sales. 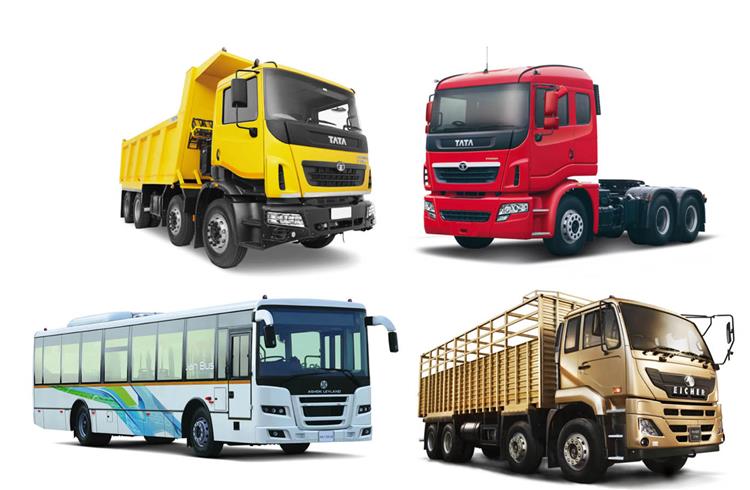 The first month of 2017-18 has not been a positive one for the commercial vehicles sector. All the manufacturers have recorded negative growth in the month, and the medium and heavy commercial vehicle (M&HCV) sector is clearly under pressure as sales have fallen as high as 35 percent. Heavy discounting in March 2017 to clear BS III stock, implementation of BS IV emission norms from April and the subsequent price increase in vehicles has resulted in sharp fall in sales.

Market leader Tata Motors saw its overall sales fall by 36 percent in April. The company says this is an unusual decline, in exceptional circumstances and expects production, wholesales and retails to pick up in May and June. Ashok Leyland and Mahindra & Mahindra have registered almost 43 percent and 41 percent declines in their M&HCV sales respectively in the month. Likewise, VE Commercial Vehicles’ total domestic sales slid 44.5 percent in April.

Industry analysts expect the April-June quarter to be slow though growth would likely pick up in with GST in place from July. It appears that fleet operators have delayed buying of new heavy trucks for the time being and the replacement demand is fading.

In its outlook for FY2018, rating agency ICRA says, “Industry is likely to witness 6-8 percent growth in FY2018 aided by higher budgetary allocation towards the infrastructure and rural sectors; potential implementation of scrappage program will also trigger replacement demand.”

ICRA estimates that during FY2018, “M&HCV trucks will grow by 6-8 percent by higher budgetary allocation towards the infrastructure and rural sectors, LCV trucks by 6-8 percent on replacement demand to continue following 3 years of declining trend and pick-up in demand for consumption-driven sectors, rural markets and e-commerce. Buses are likely to grow by 5-7 percent on orders from SRTUs to support sales in M&HCVs; and smart cities initiatives. Demand from the school and staff carrier segment remains stable  and exports are to grow by 8-10 percent.”

“Profitability indicators of CV OEMs will moderate marginally because of recovery in material prices and gradual pass through of BS-IV costs,” says ICRA

How the OEMs fared in April
In the monthly sales, Tata Motors’ overall CV sales in April 2017 declined by 36 percent to 16,017 units. According to Tata Motors, CV sales were affected by the Supreme Court judgement announced on March 29, with the ban on BS III sales leading to the need for a higher quantity of BS IV stock for April sales. The higher demand at short notice was not met in production, as vendors struggled to meet with the higher demand, especially in the M&HCV segments. Moreover, after the strong pre-buying of BS III vehicles in March, and the price increase of BS IV vehicles (especially in M&HCVs and buses at 8-10 percent), demand for BS IV vehicles was also weak.