Exploring India’s growing electric vehicle (EV) industry and how the country’s supplier and component community can tap into new opportunities. 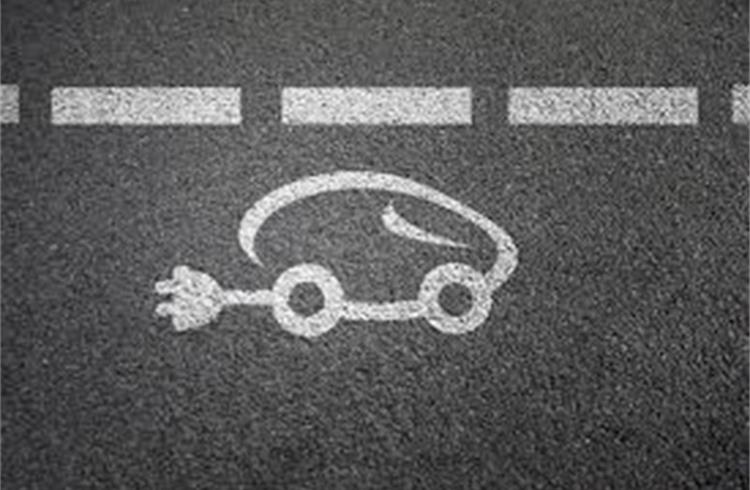 Electrification has quickly emerged as one of the key global megatrends across the industry and is a contributor to the disruptive era in the automotive and mobility sectors.

Mature markets such as Europe and Greater China are taking significant steps to transition their vehicles to the electric age, and their consumer markets have responded enthusiastically. India is slightly behind the curve compared with the e-mobility leaders but is betting on mass-scale electric mobility. 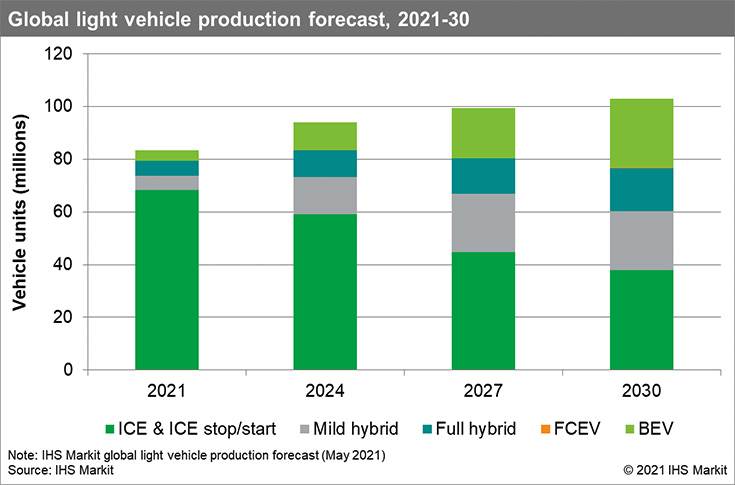 The AP (alternative powertrain) industry in India is still developing, with limited availability and affordability of electrified vehicles. However, by 2030 one in every four vehicles produced in India should leverage some form of alternative propulsion, with mild hybrids forecast to hold the dominant market share among all AP vehicles.

Evolution of the AP component industry
AP component technologies have already reached a level of maturity that supports mass-market adoption and large-scale production of electrified vehicles.

For full-hybrid and battery electric vehicles, the use of permanent magnet motors should remain widespread, owing to their higher torque density, better efficiency, and smaller packaging envelope. In a similar fashion, increasingly nickel-rich chemistries for battery cells, such as NMC622 and NMC811,are likely to be the preference of most mainstream automakers globally.

Moving forward, to support a significant increase in AP component demand, suppliers and OEMs will have to quickly develop components and technologies and scale up their production to keep pace with the momentum.

We have witnessed new and interesting strategies, collaborations, and joint ventures among component suppliers to expand their offerings and capture the new markets as and when they arise. A case in point is the e-axle domain where electric motor, inverter, and transmission suppliers have increasingly joined hands to provide integrated electric propulsion solutions.

New joint ventures and other partnerships will also enable the constituent companies to leverage common or complementary synergies and develop or expand into new products, services, and business areas. Meanwhile, divestments and spin-offs allow companies to shift more focus and capital to growth areas such as e-mobility.

Furthermore, consolidation of business practices may also be a prudent move from a financial perspective. Through mergers and acquisitions, horizontal, or vertical integration, companies can strengthen business lines and increase market share.

Finally, by obtaining government support such as exemptions, subsidies, and schemes, companies can ease the financial burden of establishing new businesses in emerging sectors such as this.

New opportunity areas for suppliers
The role of tier-1 and tier-2 suppliers is changing. The shift to electrified propulsion is destined to bring major opportunities as well as challenges for traditional OEMs, suppliers, and new entrants. As highlighted earlier, suppliers will have to quickly develop technology and manufacturing capabilities to support the transition.

The Indian market for electric motors and power electronics components is likely to witness colossal growth from 0.15 million units in 2020 to 1.8 million units in 2030.  The domestic opportunity, along with the chance to manufacture at scale and supply to global markets, is potentially very lucrative for tier-1 and tier-2suppliers.

In terms of the global component supply chain, electric powertrain component manufacturing should increasingly shift within OEMs, as they look to reduce production costs and manage complexities, while maintaining a degree of powertrain ownership, especially for second-generation platforms.

Even though the overall size of the EV component market is increasing, the share of component outsourcing should diminish in the long term as indicated in the following chart. 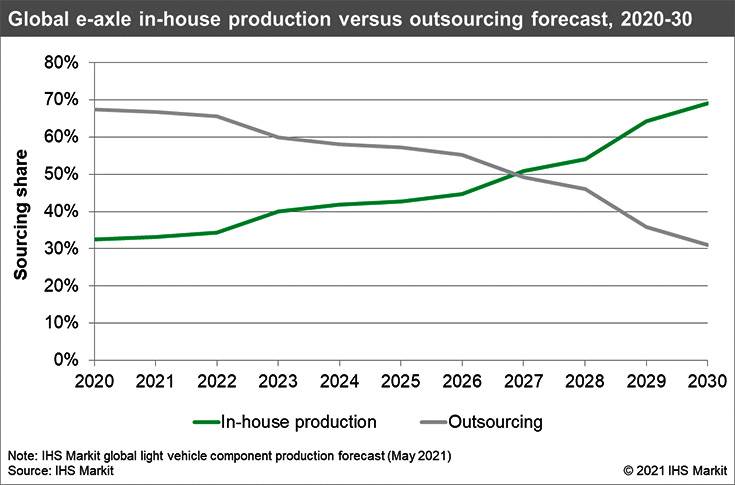 However, this development may put additional pressure on the suppliers to identify new or niche markets to find additional opportunities.

Tier-1suppliers will have to constantly innovate and develop components related to new and upcoming technologies, competing with other suppliers as well as in-house OEM capability to secure business. They can also increase their product offerings by collaborating with other tier-1suppliers to provide solutions such as integrated power electronics and e-axles.

India versus the rest of the world
While growth in the AP (alternative powertrain) industry is on an upward trajectory, the industry in India has much ground to cover to realize widespread adoption. The cost-benefit analysis weighs in favor of electrification in two- and three-wheel domains as well as ride-sharing markets, but the same cannot be said for light vehicles yet.

In the long term, India has the potential to establish itself as a global research and manufacturing hub. Existing tailwinds that may lead to this scenario are favorable FAME II policies, the government’s production-linked incentives (PLI) for domestic manufacturing of battery cells, as well as incentives for establishing a domestic semiconductor industry.

Even though India lacks the necessary raw materials for the production of major electrified powertrain components, it is among the few territories that have the strategic advantage of the lowest costs for battery cell-manufacturing, as well as some other electric powertrain components.

Many state governments are also offering supply-side incentives and capital subsidies for AP component manufacturing and assembly. Domestically, operating OEMs and suppliers have expansion capabilities already in place, and they can significantly upscale manufacturing to become a larger player in both domestic and export markets.

India’s component industry already has the right set of resources, a well-defined supply-chain, and an in-depth understanding of the automotive business. By leveraging these assets and focusing on EV component development and manufacturing as demand increases, the industry can potentially gain a strong foothold in domestic and export markets.

To get an in-depth information on the evolving EV ecosystem, log in to an Autocar Professional – IHS Markit webinar on ‘Supply Chain Dynamics of Electrified Powertrain Components’, on June 15, at 2:30 p.m (IST). Register here to participate.